Below, we compile quotes from campaigns’ ads, websites, social media posts, and statements reported in the media that illustrate endorsement or opposition to election denial — claims that the process or result of the last presidential election was illegitimate. Each of the candidates is running for an office that will play a role in administering future elections in Wisconsin. Information about the financing of these campaigns and those in other battleground states can be found here.

Gov. Tony Ever­s’s (D) reelec­tion campaign sent an email to support­ers with the subject: “They’ve openly tried to over­turn 2020 – we can’t let them do it again in 2024.” The email claims that one of Ever­s’s oppon­ents, State Rep. Timothy Ramthun (R), is “trying to take back Wiscon­sin’s elect­oral votes for Joe Biden.” Evers has defen­ded the 2020 elec­­tion as “safe & secure.” A campaign email claims that “our demo­cracy is in danger,” saying that Ever­s’s oppon­ents are “ampli­fy­ing Trump’s big lie” and that the advisers of a rival candid­ate “have been implic­ated in a plot to send fake elect­ors to steal Wiscon­sin in 2020.” Another email accuses his oppon­ents of “lies about the elec­tion and unpat­ri­otic attacks on our demo­cracy,” conclud­ing that “demo­cracy itself is on the ballot.” 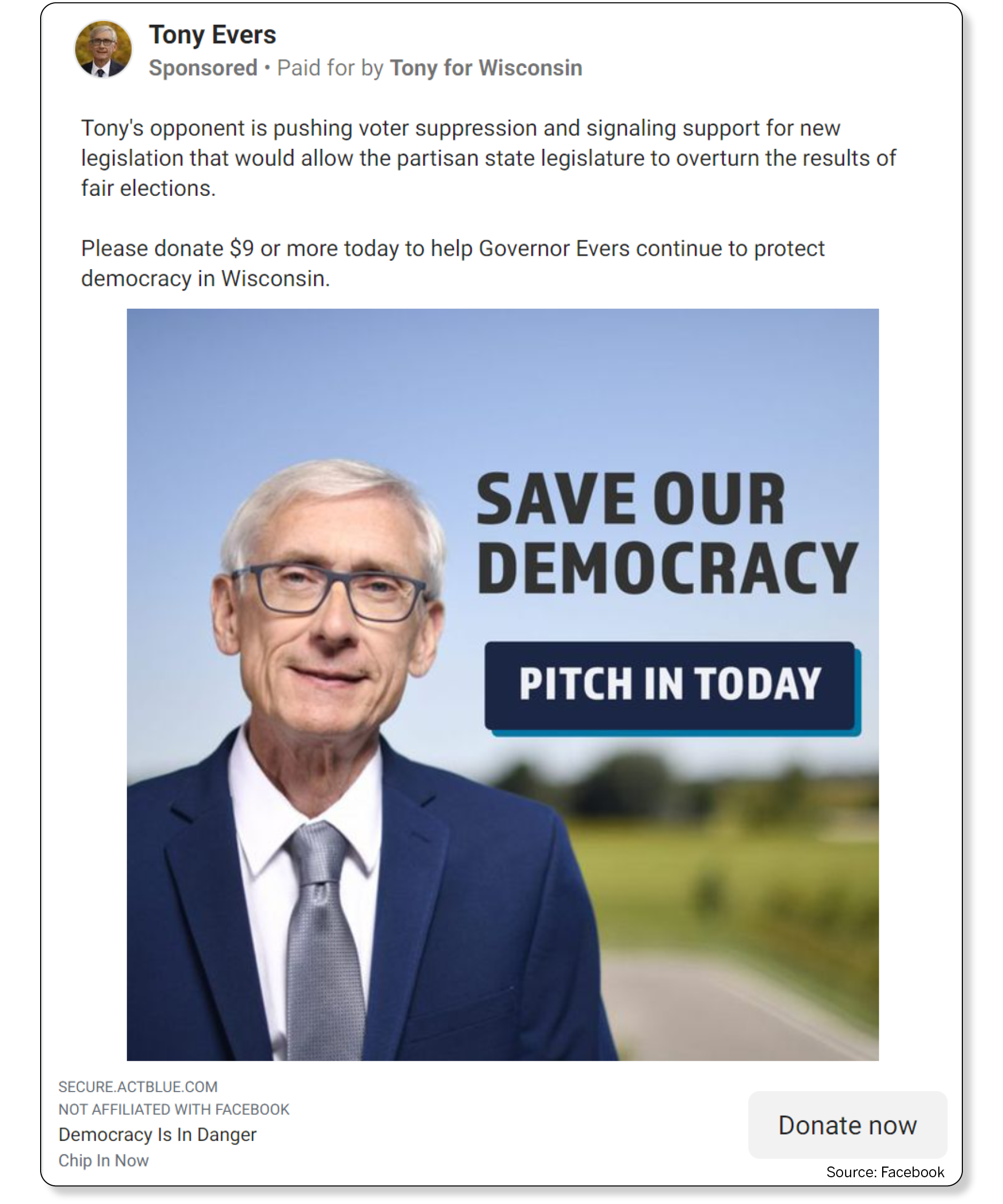 Former Lt. Gov. Rebecca Kleefisch (R) said the 2020 vote in Wiscon­sin was “rigged.” When asked in a Febru­ary radio inter­view whether Biden won the elec­tion, Kleefisch said, “I think the better ques­tion is, did he win the state of Wiscon­sin fairly? And I think that answer is going to wind up being no.” In a campaign TV ad, she argues, “the liberal left is still trying to rig elections and cancel out your vote” and promises to “abolish the liberal state elections commission.” Kleefisch suppor­ted audits into the 2020 elec­tion, citing voter fraud and dona­tions to fund elec­tion admin­is­tra­tion origin­at­ing from Face­book CEO Mark Zuck­er­ber­g’s char­ity. She tweeted about her plan to create a state elec­tion integ­rity agency to “stop fraud,” saying “Confid­ence in our elec­tions must be restored.”

Construc­­tion exec­ut­ive Tim Michels (R) said the elec­­tion was “maybe” stolen, that there was “a lot of bad stuff” and an unknown number of “illegal ballots.” Michels refuses to “say whether he would certify the next pres­id­en­tial elec­tion” and refuses “to say whether Wiscon­sin’s 2020 elec­tion was prop­erly called.” In July 2022, he said if elected, he is not ruling out signing legislation to overturn the results of the 2020 election. Michels prom­ises as governor to “fix the ‘big prob­lems that we had in 2020,’ citing the use of ballot drop boxes and private grant fund­ing to admin­is­ter elec­tions.” Michels also argued: “No one knows what the extent of the elec­tion fraud was and that’s the prob­lem.”

The campaign website of state Rep. Timothy Ramthun (R) features his proposed resolution that, among other things, “reclaims Wisconsin’s 10 fraudulent electoral ballots cast for Joseph R. Biden and Kamala Harris.” The alleged factual support for this includes “manipulations” by the Mark Zuckerberg-funded Center for Tech and Civic Life, the “statistical impossibility” of the vote results, and “deletion of log file data” from voting machines. On his campaign page, Ramthun posted a video he said “vindicated” his work to change the election result: a Tucker Carlson segment featuring claims of “massive election bribery” and “elder abuse, all to wring out votes” from residents of senior enters.

Facebook ads from the gubernatorial campaign of business owner Jonathan Wichmann (R) claimed there was “corruption surrounding state elections” and supported the “effort to decertify the 2020 election.” On his podcast, Wichmann called for a “forensic audit,” saying he believed that “there absolutely was” election fraud.

In his campaign announce­ment, Secretary of State Doug La Follette (D), a 10-term incum­bent, said other candid­ates “have proposed steal­ing power over elec­tions and concen­trat­ing them in the office in the hopes that they can use it to tilt the results of the next pres­id­en­tial elec­tion.” In April 2022, La Follette argued that granting the secretary of state the power to certify elections “was a risky proposition” and said that a future governor and secretary of state “could throw out the election and send their own people to Washington.” He also said that Republican secretaries of state want to “fiddle with the elections.”

Jay Schroeder (R), a former town super­­­visor of Menasha, Wiscon­­­sin, called for “the elect­ors of Wisconsin for the 2020 Pres­id­en­­­tial elec­­­tion to be rescin­ded” in a press release that described certain voter regis­tra­­­tion stat­ist­ics as a “RED FLAG for phantom voters,” a term elec­­­tion deniers use for alleg­a­­­tions that iden­tit­ies of dead people are used to cast votes. In May 2022, Schroeder posted on Facebook about his belief that the 2020 election was “rigged” and included list of unsubstantiated numbers about alleged voter fraud in Wisconsin. His campaign announce­­ment called for the secret­ary of state to over­­see elec­­tions, saying: “The days of rigging elec­­tions for fraud are over.” In June, Schroeder claimed: “The secret­ary of state has to sign a sheet of paper for the elec­tion,” and said, “I would­n’t have signed it. Period. That means [the state’s Elect­oral College votes] would­n’t have been awar­ded.”

On his campaign Face­book page, Justin Schmidtka (R) shared calls to “decer­tify” the 2020 elec­tion results and “reclaim” Wiscon­sin’s elect­oral college votes. He also shared a state­ment from Trump claiming “cheat­ing in the 2020 elec­tion.” He has called for the “dismant­ling” of the current elec­tion admin­is­tra­tion agency, the Wiscon­sin Elec­tions Commis­sion. On his campaign Facebook page, Schmidtka reposted a post about eliminating alleged voter fraud and promoting “2000 Mules,” a movie claiming large numbers of people put false ballots in drop boxes and he added: “This is what I have been fighting for from the very beginning!”