Below, we compile quotes from campaigns’ ads, websites, social media posts, and statements reported in the media that illustrate endorsement or opposition to election denial — claims that the process or result of the last presidential election was illegitimate. Each of the candidates is running for an office that will play a role in administering future elections in Arizona. Information about the financing of these campaigns and those in other battleground states can be found here.

Busi­ness owner Steve Gaynor (R) appeared at a Trump rally in the summer of 2021 where elec­tion denial was raised by several speak­ers. Gaynor said, “This has to be fixed. This can’t happen again — there are a million Repub­lic­ans in our state who believe the elec­tion was rigged.” His campaign ran a Face­book ad in support of Arizona legis­lat­ors’ partisan audit. 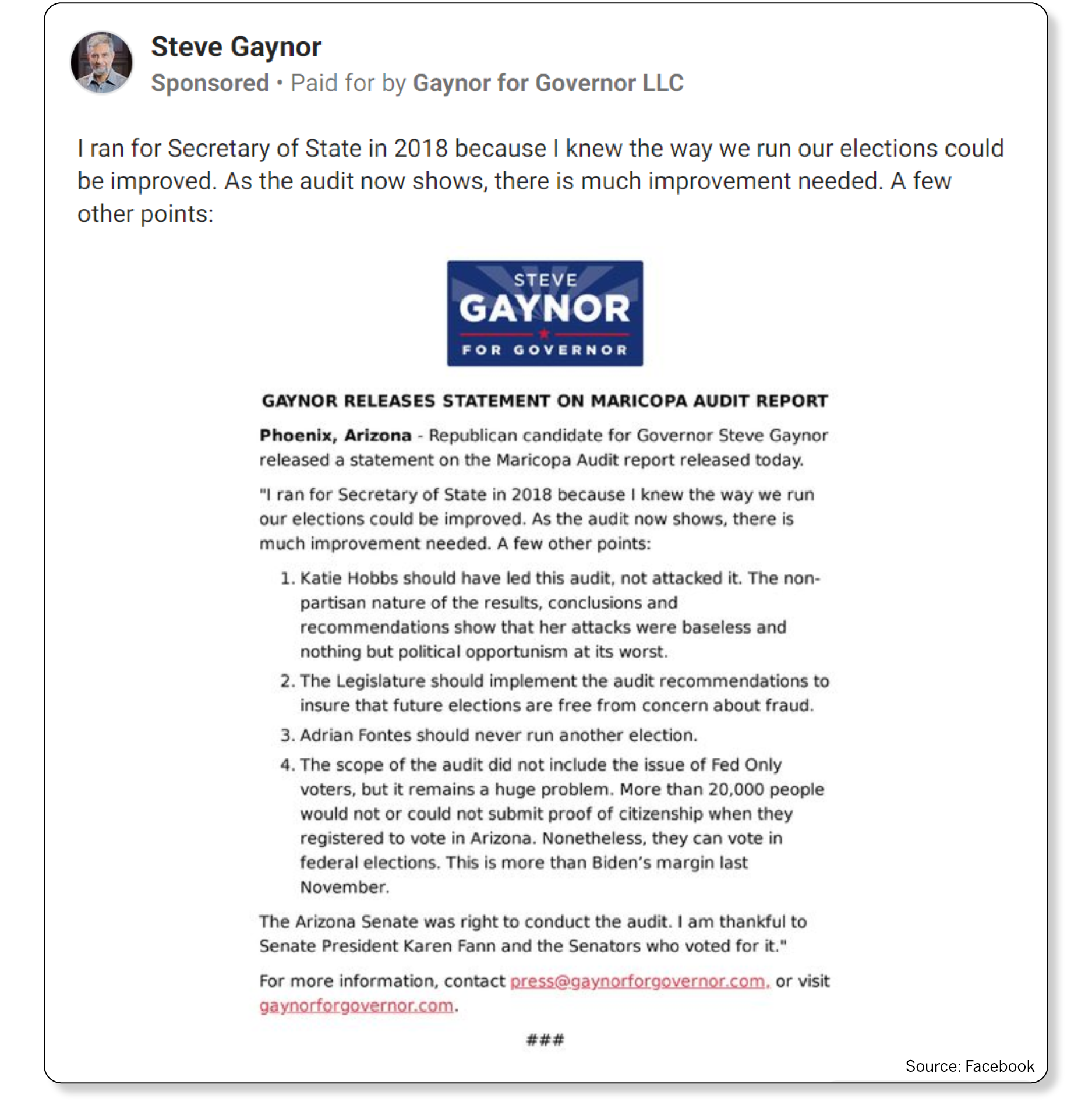 As the current Arizona secretary of state, gubernatorial candidate Katie Hobbs (D) has defended the way the 2020 election was conducted. In January, she tweeted that Trump “spewed lies about the 2020 election and encouraged the ongoing and dangerous attacks on our democracy," predicting that her opponent, Kari Lake, “will reject the will of the people in future elections.” In an email to supporters, the Hobbs campaign describes her opposition to “sham audits," “misinformation,” and “anti-democratic extremism” and warns that “proponents of the Big Lie are running to oversee election results in statewide and local offices.”

Former TV news anchor Kari Lake (R) has repeatedly claimed the 2020 elec­­­tion was stolen and has sued to ban the voting machines the state uses, alleging they are unre­li­­­able. Lake has said she would not have certi­fied the 2020 result. In an inter­­­­view featured on her campaign website, Lake said the sham ballot review in Arizona revealed evid­­­­ence of fraud­u­lent votes, conclud­ing, “Joe Biden did not win.” She has said the lead­ing Demo­cratic candid­ate, Secret­ary of State Katie Hobbs, should be imprisoned for how she ran the 2020 elec­­­tion. A campaign TV ad has Lake talk­ing about the “rigged elec­­­tion of 2020” over darkened foot­age of people using ballot drop boxes, taken from an elec­­­tion fraud conspir­acy docu­­­ment­ary by conser­­­vat­ive comment­ator Dinesh D’Souza. In July 2022, Lake pree­mpt­ively cast doubt on the outcome of the upcom­ing Arizona primary, telling support­ers that her top oppon­ent “might be trying to set the stage for another steal.” At a campaign stop less than two weeks before the primary, Lake claimed multiple times that fraud was taking place in this year’s election, saying she was already “detecting some stealing going on.”