Below, we compile quotes from campaigns’ ads, websites, social media posts, and statements reported in the media that illustrate endorsement or opposition to election denial — claims that the process or result of the last presidential election was illegitimate. Each of the candidates is running for an office that will play a role in administering future elections in Georgia. Information about the financing of these campaigns and those in other battleground states can be found here.

The campaign website of nonprofit executive Catherine Davis (R) features claims about a "barrage of anomalies including allegations of ballot harvesting, dead people voting, underage teens voting, [and] chain of custody violations,” and a plan to “steal the electoral college votes.”

In public remarks posted on Davis’s campaign Facebook page, she claimed that “drop boxes is how they stole the election,” and said she saw election workers “pull the ballots from underneath the table,” a reference to a disproven claim about vote counting in Fulton County.

Gov. Brian Kemp (R) has defen­ded himself and the 2020 results against elec­tion denial attacks and said, “I believe Joe Biden is the pres­id­ent of the United States. The elec­tion got certi­fied. There’s noth­ing anybody can do about that.” He has touted his role enact­ing a voting bill called the Elec­tion Integ­rity Act.

In the governor’s race, Former U.S. Sen. David Perdue (R), began his open­ing state­ment in an April debate by saying: “First off, folks, let me be very clear tonight, the elec­tion in 2020 was rigged and stolen.” Perdue, who lost his bid for reelec­tion to the Senate in the 2020 elec­tion cycle, said: “In my elec­tion and the pres­id­ent’s elec­tion, they were stolen. The evid­ence is compelling now.” He said he would not have certi­fied the 2020 elec­­­tion. After his campaign announce­­­ment, he joined a lawsuit seek­ing to show that there “were seri­ous viol­­­a­­­tions of Geor­­­­­gia law in the Fulton absentee ballot tabu­la­­­tion." 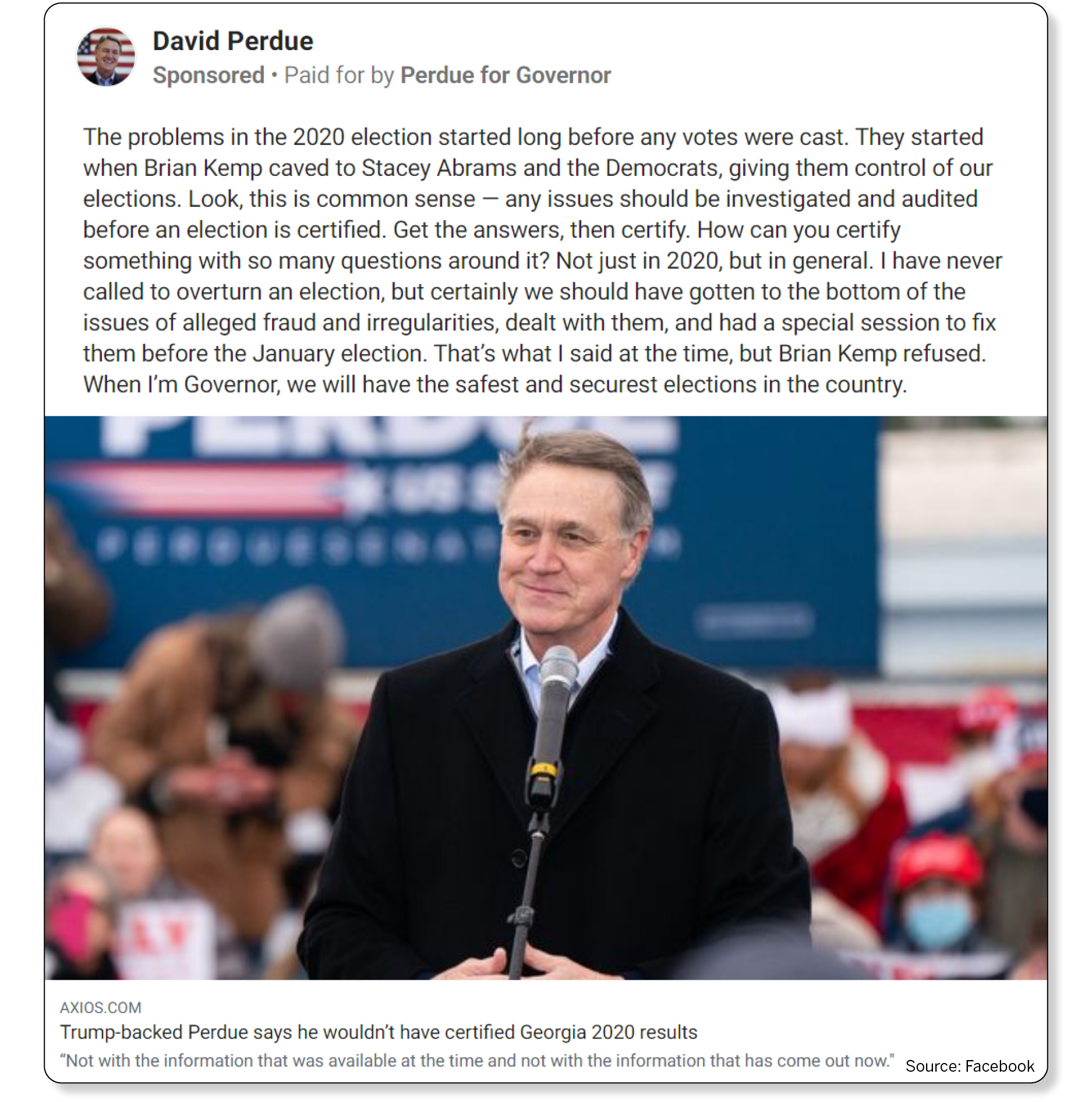 Campaign ads from the aborted gubernatorial campaign of former state repres­ent­at­ive Vernon Jones (R) prom­ise he will “author­ize a full statewide forensic audit of the 2020 pres­id­en­tial elec­tion.” Jones has said on Twit­ter, “If it weren’t for Brian Kemp, Donald Trump would still be Pres­id­ent of these United States.” 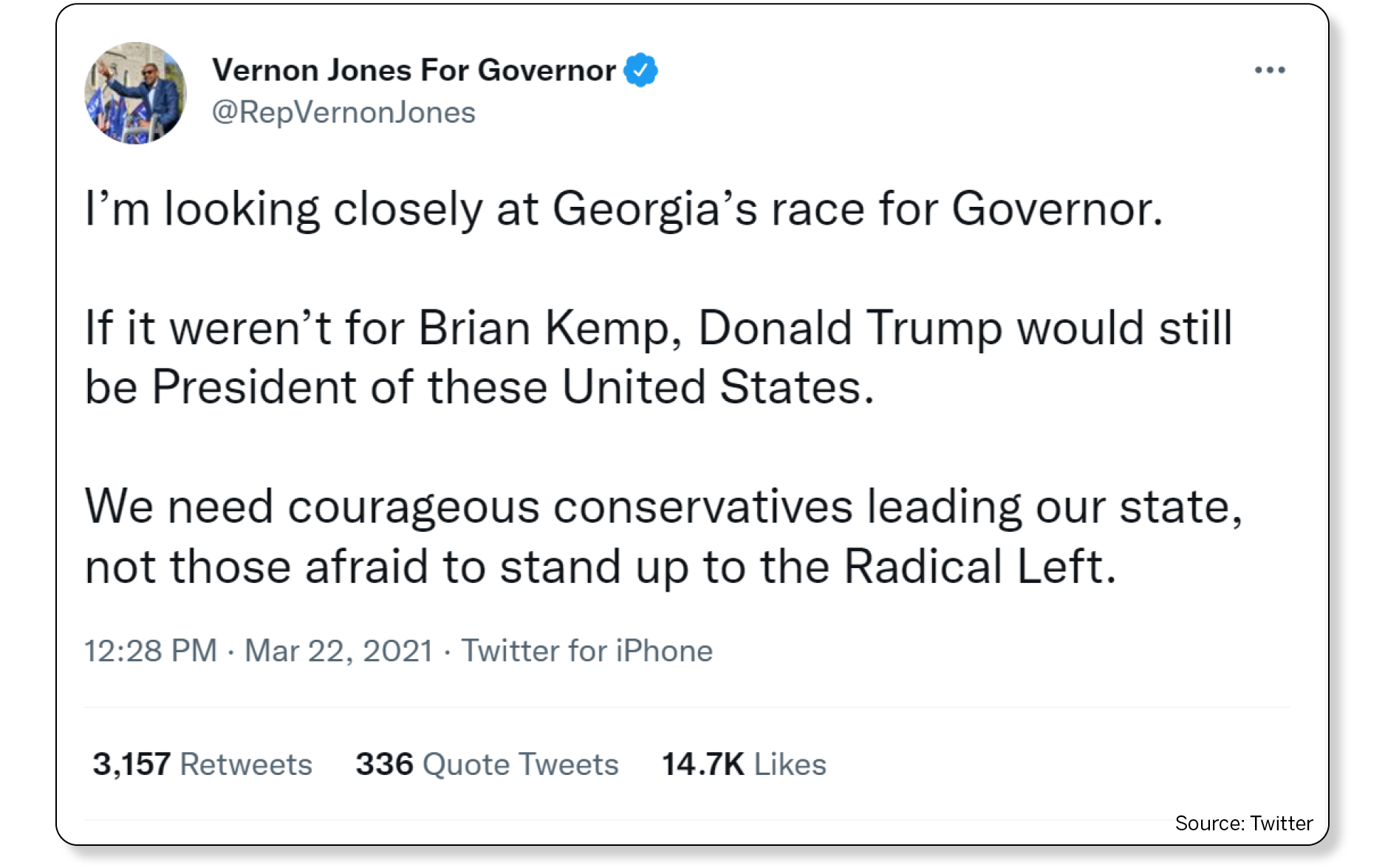 Educator Kandiss Taylor (R) said, “Arizona helped Geor­gia commit the voter fraud,” and she deman­ded that the governor conduct a “full forensic audit” in Fulton and Chatham Counties. In a January, she posted on Facebook that the Georgia election had potentially “over a million illegally harvested ballots! DECERTIFY GA NOW!”

The former Mayor of Alpharetta, Georgia, David Belle Isle (R) has said that Georgia “certified the wrong result,” and that “I believe on statistics alone that Trump won Georgia.” He has released ads featuring parody versions of popular country songs with the lyrics changed to claim there was misconduct in the 2020 election. The lyrics of one, in part:

Might’ve been some cheatin’ but they never got caught

A pyramid of ballots in the pale moon­light 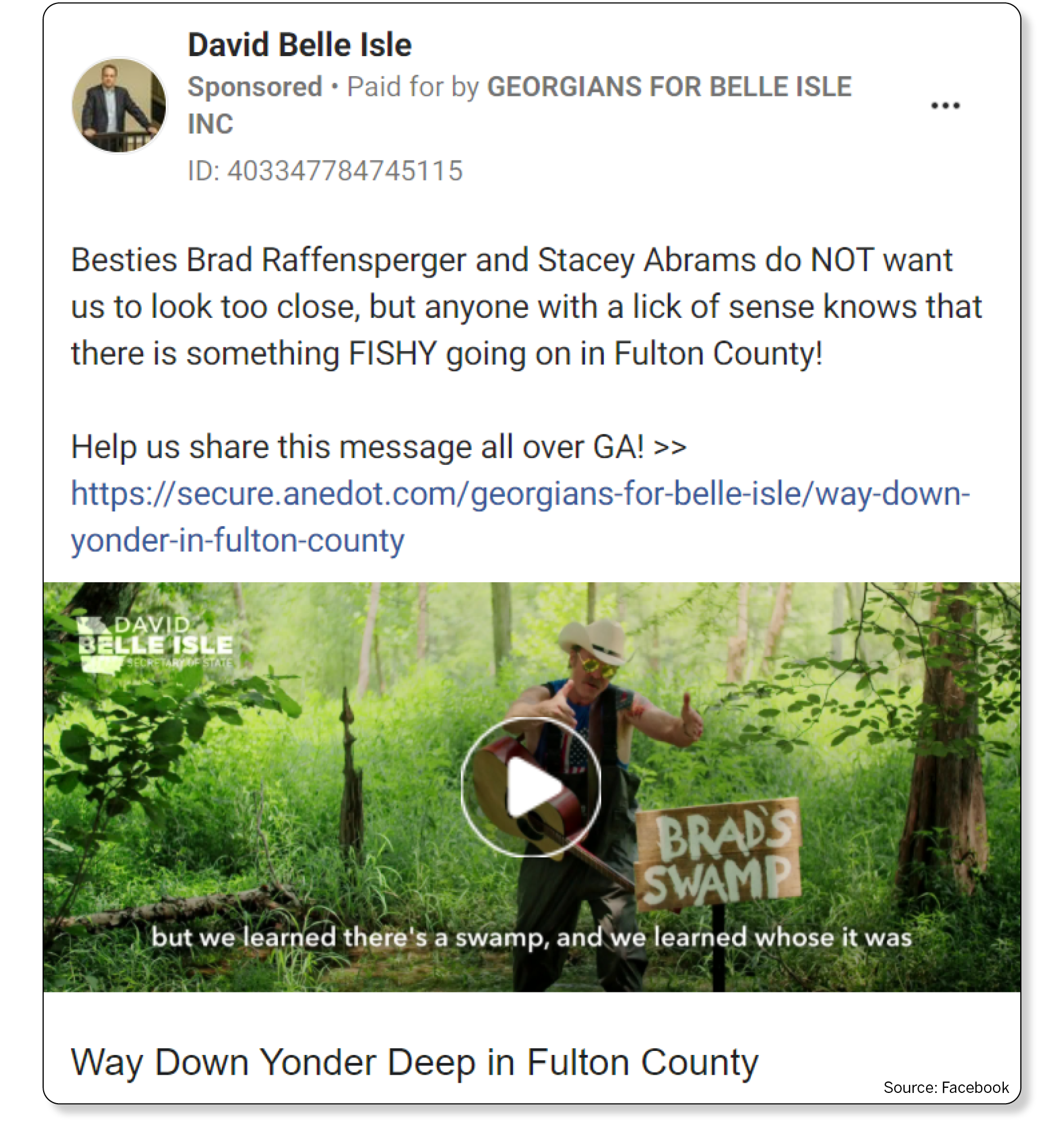 John Eaves (D), who used to chair the Fulton County Board of Commis­sion­ers, posted on Face­book: “there is no indic­a­tion of fraud in last year’s elec­tion. The results still stand that after three ballot counts and multiple invest­ig­a­tions Demo­crat Joe Biden defeated Repub­lican incum­bent Donald Trump in Geor­gi­a’s pres­id­en­tial elec­tion by about 12,000 votes. It is time we move past the ‘big lie’ as it is a consist­ent waste of tax dollars.”

Rep. Jody Hice (R) has said, “If we were to get an accurate count of the votes in Georgia, I believe absolutely Trump won Georgia.” In an April debate, Hice made repeated claims about fraud in 2020 and alleged that Secretary of State Brad Raffensperger made a “deal” with Stacey Abrams that lead to fraud. He has claimed that “700,000 people are illegal voters.” As a member of Congress, Hice voted against certi­fy­ing Biden’s victory.