Below, we compile quotes from campaigns’ ads, websites, social media posts, and statements reported in the media that illustrate endorsement or opposition to election denial — claims that the process or result of the last presidential election was illegitimate. Each of the candidates is running for an office that will play a role in administering future elections in Pennsylvania. Information about the financing of these campaigns and those in other battleground states can be found here.

Lou Barletta (R), a four-term member of Congress, has said that mail ballots allowed fraud in the 2020 elec­tion. He has called for a “full forensic audit,” imply­ing that the state’s admin­is­tra­tion of elec­tion has some­thing to hide. He signed the false Elect­oral College certi­fic­ate that attemp­ted to assign Pennsylvani­a’s elect­ors to Trump. 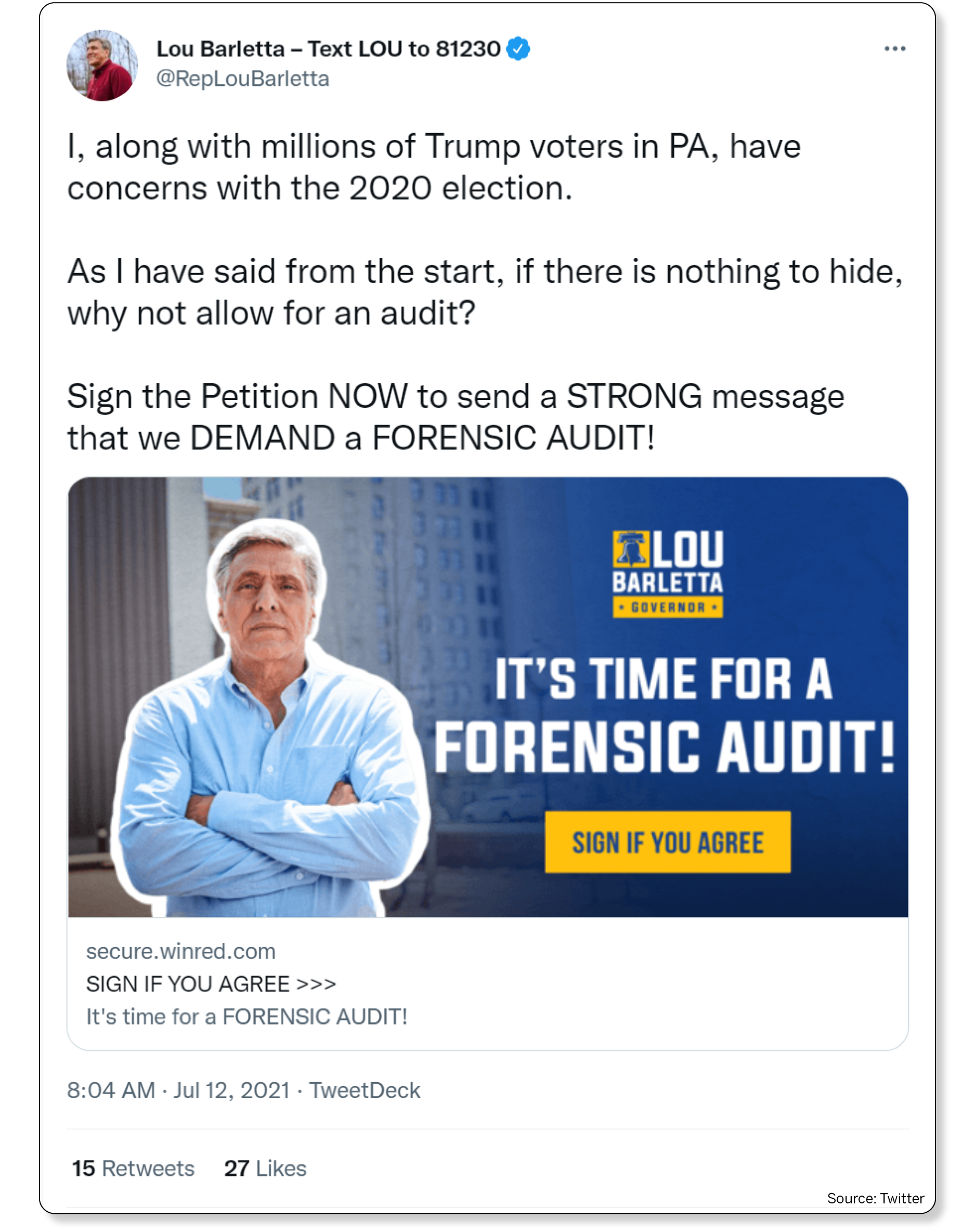 As a Mont­gomery County commis­sioner, Joe Gale (R) voted not to certify Biden’s win in the county, alleging “irreg­u­lar­it­ies” and “unveri­fied mail-in ballots.” In a Janu­ary 2022 debate, he said there is “no way” Biden received the most votes of any pres­id­en­tial candid­ate.

Charlie Gerow (R), a public rela­tions exec­ut­ive and polit­ical comment­ator, signed the false Elect­oral College certi­fic­ate that attemp­ted to assign Pennsylvani­a’s elect­ors to Trump. Janu­ary posts from the “Charlie for Governor” Face­book page say “Mail-ins are RIPE for fraud, ” and that Gerow’s prior­it­ies include “Elec­tion Integ­rity because if we can’t get people to trust the vote we have no demo­cracy.”

State Sen. Doug Mastri­ano (R) convened public hear­ings about claims of wide­spread elec­tion fraud, talks about the power to “decer­tify” voting machines, and held an event with MyPil­low CEO Mike Lindell — an active spreader of false conspir­acy theories — where attendees were asked to sign a peti­­tion to decer­­­tify the result of the 2020 elec­­tion. Mastriano has said that, as governor, he “can decer­tify every single [voting] machine in the state,” claim­ing that machines from certain compan­ies are “comprom­ised.” Mastri­ano has claimed that there were more votes coun­ted in the elec­tion than there are registered voters in the state and called for an audit. His campaign launch event featured Trump Admin­is­tra­tion National Secur­ity Adviser Michael Flynn and Jenna Ellis, who worked on lawsuits to over­turn the 2020 elec­tion.

Pennsylvania Attor­ney General Josh Shapiro (D) has framed his campaign as oppos­ing “people who tried to over­turn the last elec­tion.” Shapiro put out a Face­book ad about attempts to chal­lenge the 2020 vote, saying, “Demo­cracy is on the ballot.” He posted on Face­book in Janu­ary that Trump attemp­ted to “over­turn the 2020 elec­tion and under­mine our demo­cracy.” He also posted: “Lying about the outcome of Pennsylvani­a’s 2020 elec­tion . . . is actively damaging our demo­cracy.” In an interview published in Febru­ary, Shapiro said, “state actors, like a governor, are going to be crit­ical to defend­ing our demo­cracy. . . . And Pennsylvania, I believe, will be at the epicen­ter of that fight.” He vowed to appoint a secret­ary of state “who will respect the rule of law.”

Former UPS executive John Ventre (R) claimed in a Facebook post from January that “Biden stole the 2020 election.” His campaign website features the claim that Pennsylvania’s Act 77 — which made voting easier by allowing no-excuse mail voting and other changes — cost Trump the election in the state.

In a campaign ad from former Delaware County Coun­cil Member Dave White (R), the candid­ate says, “If there wasn’t any fraud in the Pennsylvania elec­tion, why every time we call for an audit do the Demo­crats cry like a little baby?” He claims Gov. Tom Wolf was “caught cheat­ing” in the elec­tion, refer­ring to the governor having his wife drop off his marked ballot in viol­a­tion of state law. Another ad ends with White saying: “Every fraudulent vote steals a vote from someone like you.”