When Pennsylvania Democrats went to the Supreme Court in 2004 to ask that Pennsylvania’s GOP-drawn congressional map be struck down as an unfair partisan gerrymander, they drew opposition from an unexpected source: fellow Democrats.

Alabama Democrats told the court in a brief they were concerned that ending partisan gerrymandering would “undermine … the ability of African Americans in Alabama to continue the effective exercise of their newly won ability to participate in the political process.”

In 2001, they pointed out, “African-American representatives pulled, hauled, and traded with their white colleagues” to achieve greater representation.

In short, political gerrymandering — in which it was taken for granted that Democrats sought an advantage — helped maximize the voice of African Americans.

Flash forward 13 years. Echoes of the same argument are being heard again as the Supreme Court once weighs the constitutionality of partisan gerrymandering — this time in the pivotal Gill v. Whitford case, involving Wisconsin’s political map. The oral argument took place last week. (In the 2004 case, the court deadlocked badly, failing to agree on where to draw the line on gerrymandering.)

Now it is the National Republican Congressional Committee that argues that ending political gerrymandering would hurt African Americans. “A [proposed] test for partisan gerrymandering creates conflicts between districting and Section 2 of the Voting Rights Act.”

Section 2 of the Voting Rights Act gives courts the power, in some circumstances, to require the creation of majority-minority districts, to ensure minority voters have an equal chance to participate in the political process.

But is the claim actually true? Is the goal of eliminating partisan gerrymandering in conflict with the goal of making sure minority communities have an effective electoral voice?

We looked at the issue empirically, by analyzing more than two decades’ worth of electoral maps — from 1992 to 2006 — from 18 states that that had majority-minority districts in this period.

Our findings upend conventional wisdom. The data categorically demonstrates that minority voting power can be protected when partisan gerrymandering is forbidden. Not only can the two goals coexist, but majority-minority districts can help prevent minority communities from being used to maximize partisan advantage — by either Republicans or Democrats.

Legislatures created more majority-minority districts in the 1990s, in part to comply with the Voting Rights Act

To set the stage for our analysis: Virtually everyone acknowledges that the wave of majority-minority districts created in the 1990s were wildly successful in finally giving African Americans and Latinos a meaningful say in who represented them — often for the first time, and particularly in the South.

Before the 1990s, there were only 32 majority-minority congressional districts in the United States (including just 11 in the South). Five Southern states — Alabama, Florida, North Carolina, South Carolina, and Virginia —had zero majority-minority districts despite having very large minority populations. That changed in the 1990s as minority groups, with support in some cases from Republicans, were successful in using the Voting Rights Act to compel creation of majority-minority districts as a remedy for vote dilution — the spreading of black voters thinly across several districts to minimize their electoral effectiveness. 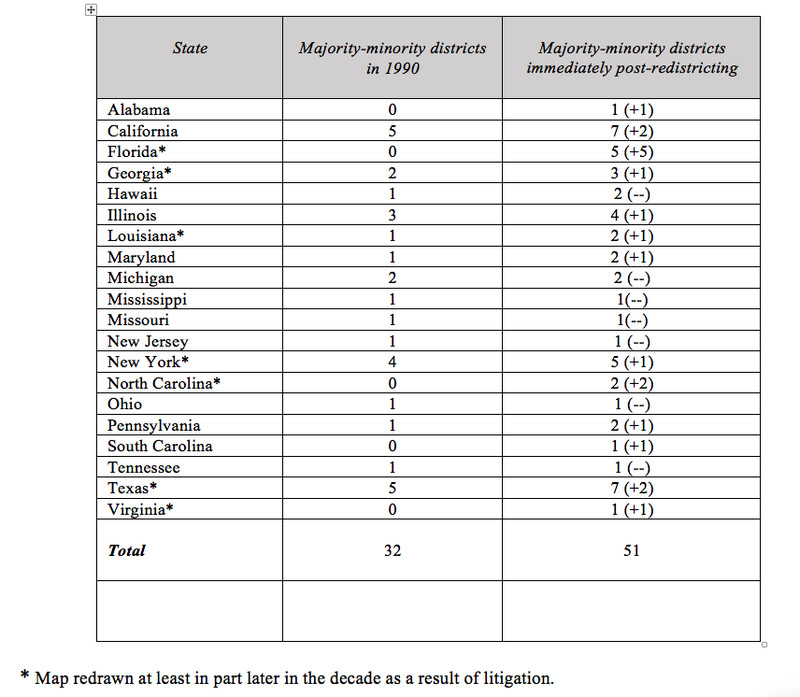 After redistricting in the early 1990s, the number of majority-minority congressional districts grew from 32 to 51, including 24 in the South. By the end of the 1990s, every Southern state other than Arkansas had at least one such district.

Conventional wisdom has held that those majority-minority districts had unintended consequences, unfairly favoring Republicans over Democrats. By packing together highly reliable blocks of Democratic voters, the reasoning goes, the new districts “bleached” surrounding districts —made them whiter and more Republican. And it is true that after the redistricting of the 1990s, many districts that had a history of electing white Democrats flipped almost overnight and began electing Republicans.

Some pundits have even argued that majority-minority districts were a significant factor in the 54-seat swing in House seats in the 1994 election, which gave the GOP control of the chamber for the first time in 42 years.

There is some truth to the conventional wisdom. That’s because whether you are gerrymandering to favor Republicans or Democrats, minority voters can be a useful focus of attention. Minority voters (especially African Americans) are overwhelmingly Democratic — helpful knowledge when you’re fine-tuning just how Democratic any given district will tend to be.

And yes, the lack of minority-majority districts before 1990 had been key to helping preserve the incumbency of many white Southern Democrats: Members of minority groups were distributed in a way that influenced elections yet did not make it possible for them to elect their preferred candidate.

This did not escape the notice of Republicans. Ben Ginsberg, general counsel to the Republican National Committee in 1990, said in 1995: “We began looking at the data, and we saw that white Southern Democrats had dominated the redistricting process literally since the Civil War, and that had created underrepresenatation for two groups— Republicans and minority voters.”

African Americans largely tell the same story about how white Democrats manipulated the system. Rep. Bobby Scott, an African-American Democrat first elected to Congress after Virginia’s third congressional district was redrawn as a majority-minority district, explainedto the New Yorker’s Jeffrey Toobin that before 1990, the strategy for preserving artificially large Democratic majorities had been “to keep African-American percentages [in particular districts] at around 35 or 40 per cent.”

Looking at the evidence

To find out, we analyzed congressional election returns from the 1990s, 2000s, and 2010s, and measured each party’s seat share using three statistical tests used by social scientists to gauge the degree of partisan bias in electoral maps. Those tests are the “efficiency gap” (subject of much publicity recently), the “seats-to-vote curve,” and the “mean-median difference. The tests vary in their approach, but all measure the degree to which a political party is able to translate votes into seat share. (If one party can consistently win a majority of seats despite attracting a minority of votes, that can in effect lock the other party out of power.)

If a map scores high in partisan bias under any of these measures, it’s a strong signal of partisan gerrymandering; if it scored high under all three, the signal is even stronger. Although some justices appeared skeptical of these tests last week — Chief Justice John Roberts referred to “sociological gobbledygook” — they hold out the hope of making the identification of gerrymandering a more scientific process than it’s been.

We found little to no link between partisan gerrymandering and majority-minority districts — and the evidence from the South was especially compelling.

Although majority-minority districts in the South more than doubled in the 1990s, Southern states displayed low, and in most cases negligible, rates of partisan bias in their congressional maps. The one exception was Texas, where congressional maps exhibited durably high rates of bias in favor of Democrats as a result of artful “cracking” of white Republican suburban voters. (They were split among various Democratic-leaning districts.) The chart below shows partisan bias in the South, from 1992 through 2000, using the efficiency gap: 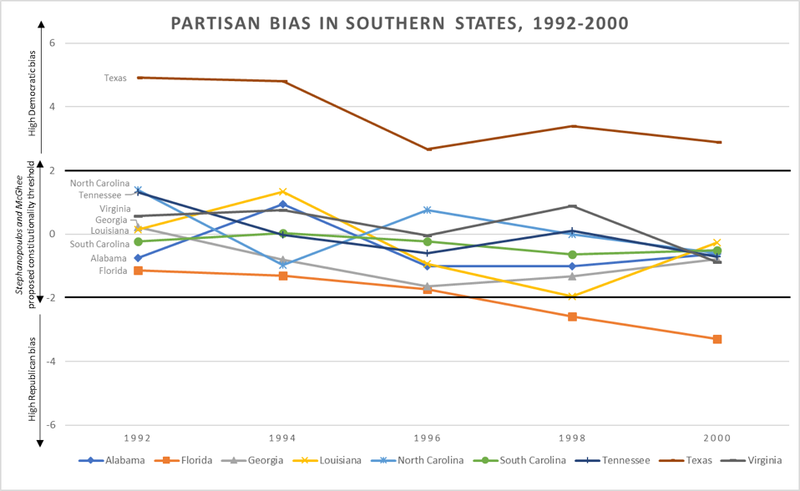 The same trend can be seen in the congressional maps of non-Southern states with majority-minority districts (again, using the efficiency gap). 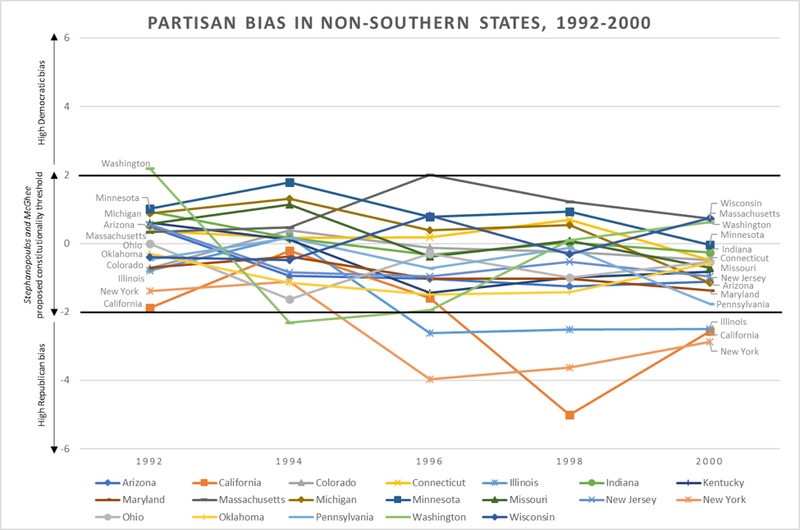 Only California, Illinois, and New York had any degree of significant pro-GOP bias. All three only developed the high bias late in the decade. It is hard to attribute the emergence of that bias to majority-minority districts, however. Majority-minority districts in the three states all were in heavily Democratic areas, such as New York City, Chicago, and Los Angeles, where surrounding districts continued to elect white Democrats by safe and comfortable margins.

Our study found that the same lack of a connection between majority-minority districts and partisan bias in the 2000s. The finding held, as well, in both Southern and non-Southern states.

But what about today? The answer again, for this decade, is no.

In fact, strikingly, the maps of this decade reveal that Republicans have been using the same kind of slicing and dicing of minority voters once practiced by white Democrats to engineer a lopsided advantage for their interests. The creation of more majority-minority districts helped eliminate artificial pro-white-Democratic bias in the 1990s. In the same way, majority-minority districts might combat pro-Republican bias in states like Texas today. 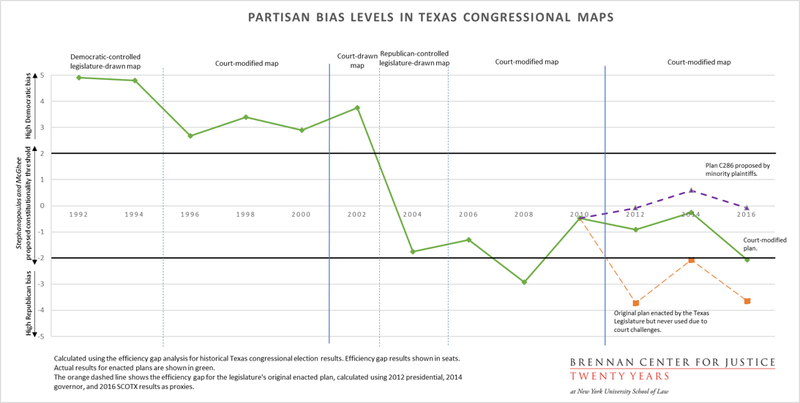 In short, there is simply no conflict between preventing outrageous partisan abuses during redistricting and ensuring fair treatment for minority communities. We can do both — and we should.