At The Week Monday, Ryan Cooper summarized some dramatic statistical work about mass incarceration undertaken by Keith Humphreys, the Stanford University professor and former Obama administration senior advisor for drug policy. The headline of the piece, “The plummeting U.S. prison admission rate, in one stunning chart,” was accompanied by Cooper’s pronouncement that “whatever the reason” for the drop it “is certainly great news.” Some of the same optimism was expressed over the weekend, in The New York Times Book Review section, by David Cole, the esteemed Georgetown law professor who has written so eloquently recently about many of the greatest injustices in American law. Reviewing Columbia University professor Robert Ferguson’s excellent book, “Inferno,” Cole proclaimed that “we may be on our way out of the inferno” and that “it is just possible that we have reached a tipping point” in the fight against mass incarceration.

Would that it were so. It is far too early, as a matter of law, of policy, and of fact, to be talking about a “plummeting” prison rate in the United States or to be declaring that the end is in sight in the war to change the nation’s disastrous incarceration policies. There is still far too much to do, far too many onerous laws and policies to change, too many hearts and minds to reform, too many families that would have to be reunited, before anyone could say that any sort of “tipping point” has been spotted, let alone reached. So, to respond to Humphreys’ work, we asked Oliver Roeder, a resident economist at the Brennan Center for Justice, to crunch the numbers with a little bit more context and perspective. What follows below ought to shatter the myth that America has turned a corner on mass incarceration. The truth is that many states continue to experience more incarceration than before, the drop in national incarceration rates is far more modest than Humphreys suggests, and the trend toward reform could easily stop or turn back around on itself. Check out Roeder’s work: 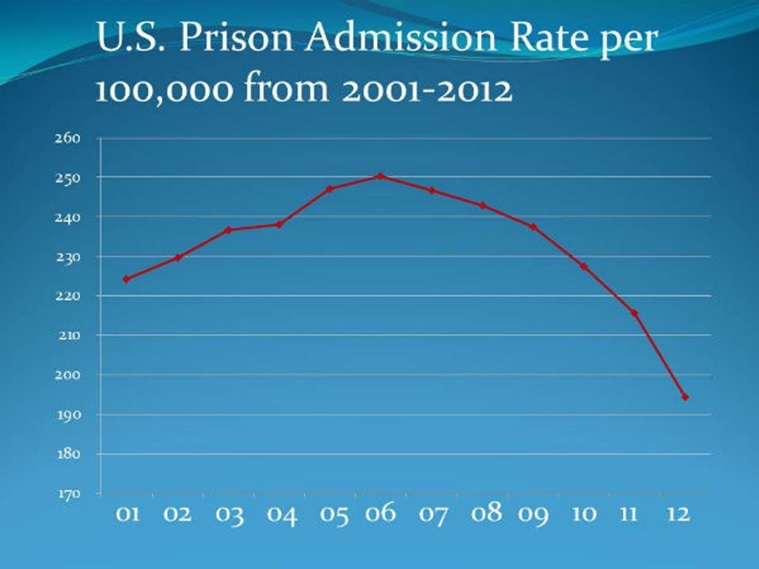 Here is the exact same information, presented with a more sensible vertical axis: 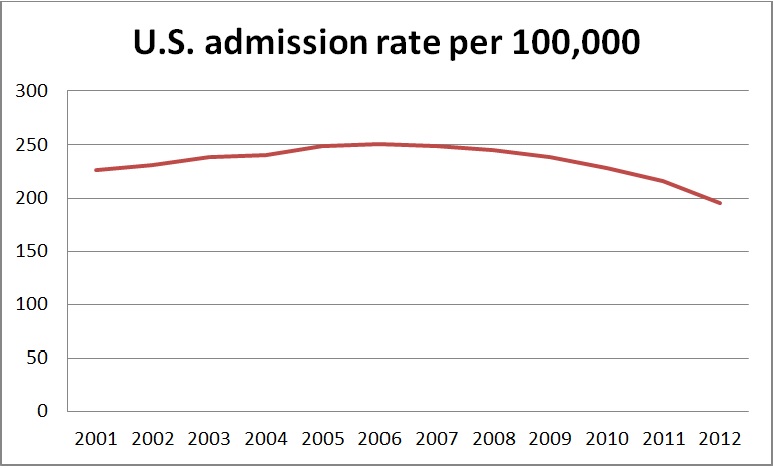 One wouldn’t describe that as “plummeting” I wouldn’t think. The admission rate is down 22 percent since its peak in 2006.

Here it is again, just this time with more years: 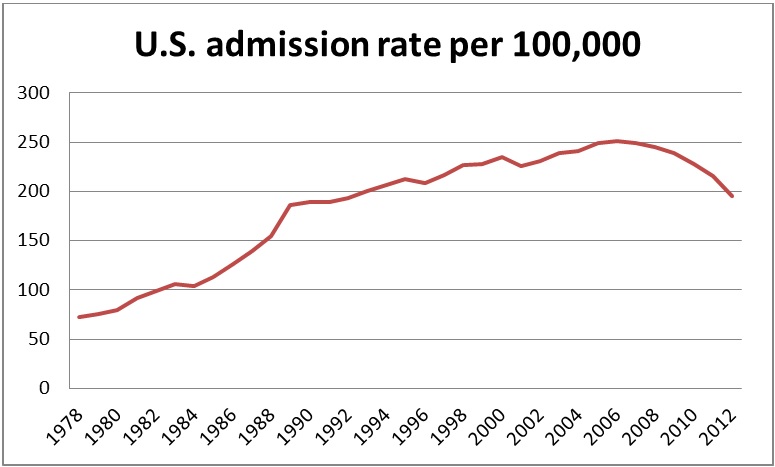 Another consideration is the release rate.  It’s also going down: 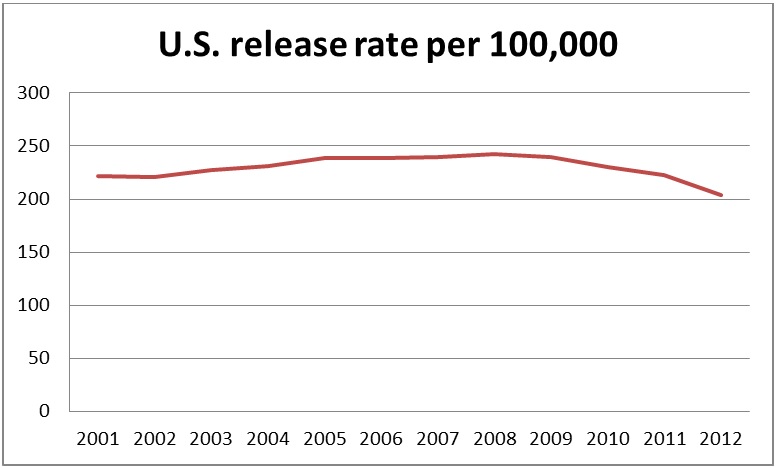 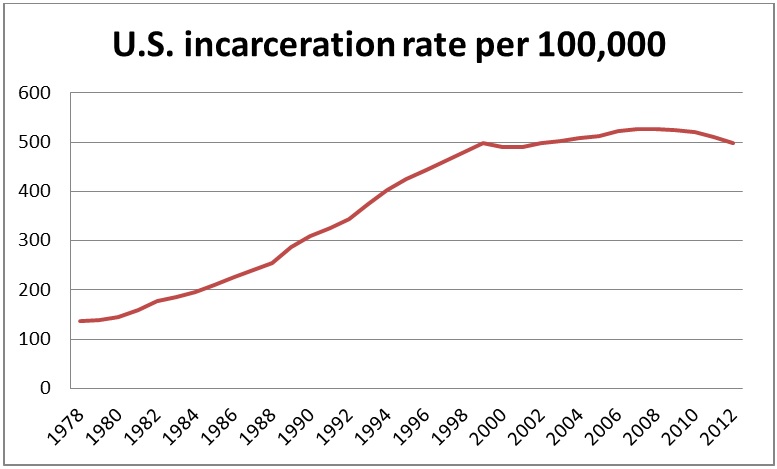 Or, zooming in to show its recent history: 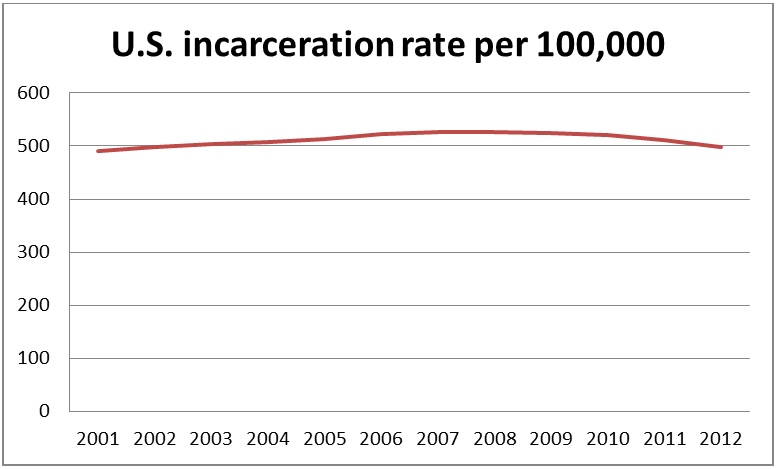 As for individual states’ incarceration rates, experiences over the past decade have varied greatly.  Since 2001, West Virginia’s incarceration rate has increased almost 63 percent , while California’s has dropped over 23 percent. (These are the biggest increases and decreases, respectively.) Here are a few notable state trends: 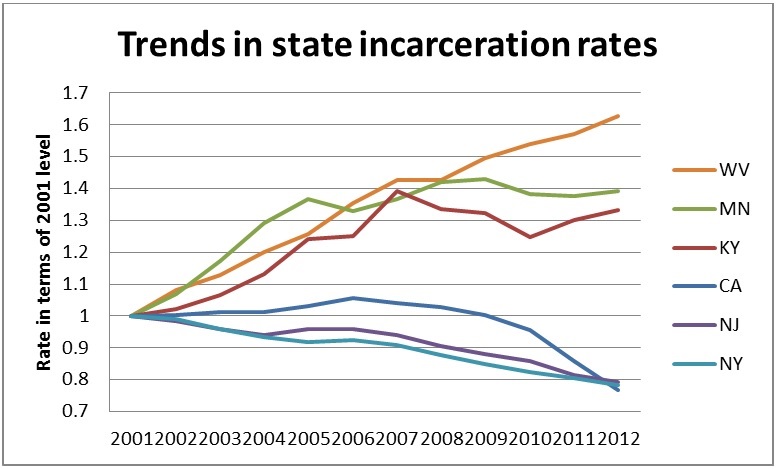 These are the states with the most extreme increasing and decreasing incarceration trends. So they can be compared easily, the graph is in terms of the states’ 2001 incarceration level (i.e. the 2001 level = 1). California, New Jersey, and New York have dipped over 20 percent from their 2001 levels, while West Virginia, Minnesota, and Kentucky have seen over 30 percent increases.

Incarceration is a state-specific issue in other senses as well. Clearly the trends can vary dramatically, but so can the rates themselves. In 2012, Louisiana’s incarceration rate was 873, while Maine’s was 159.

Eleven states decreased incarceration over the period 2000–2011. The rest increased it. Here are the ones that decreased it, and by how much: 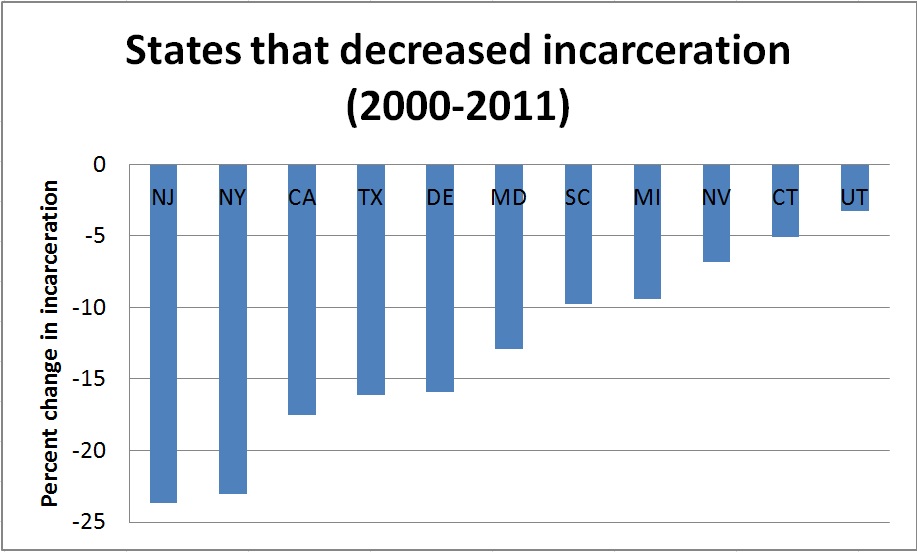 Here are the ones that increased it, and by how much:

Here are the states arranged by their changes in incarceration and in crime over the 2000s. The circles (the states) are sized by population: 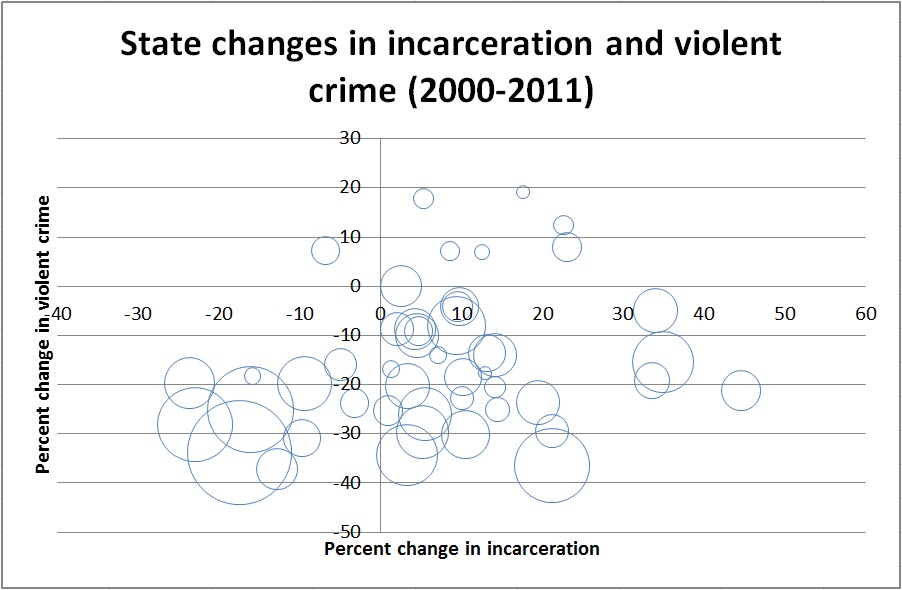