As the early stages of the 2016 presidential race begin, state legislatures are already considering hundreds of laws that could determine voters’ access to the ballot. Since the beginning of the 2015 legislative session, and as of May 13, 2015, at least 113 bills that would restrict access to registration and voting have been introduced or carried over in 33 states. Over the same time period, at least 464 bills that would enhance access to voting were introduced or carried over in 48 states plus the District of Columbia.

For the third year in a row, bills to expand voters’ access to the ballot box outpace those to restrict voting, both in terms of introduction and enactment. This strong show of support for making the ballot accessible has not necessarily put voters ahead of where they have been in recent years, because some recent restrictive legislation continues to make it harder for citizens to participate.

Of the 113 bills restricting access in this legislative session (including bills carried over from last session), 6 of them are active in 5 states, in that there has been legislative activity beyond introduction and referral to a committee in 2015 (such as hearings, committee activity, or votes). 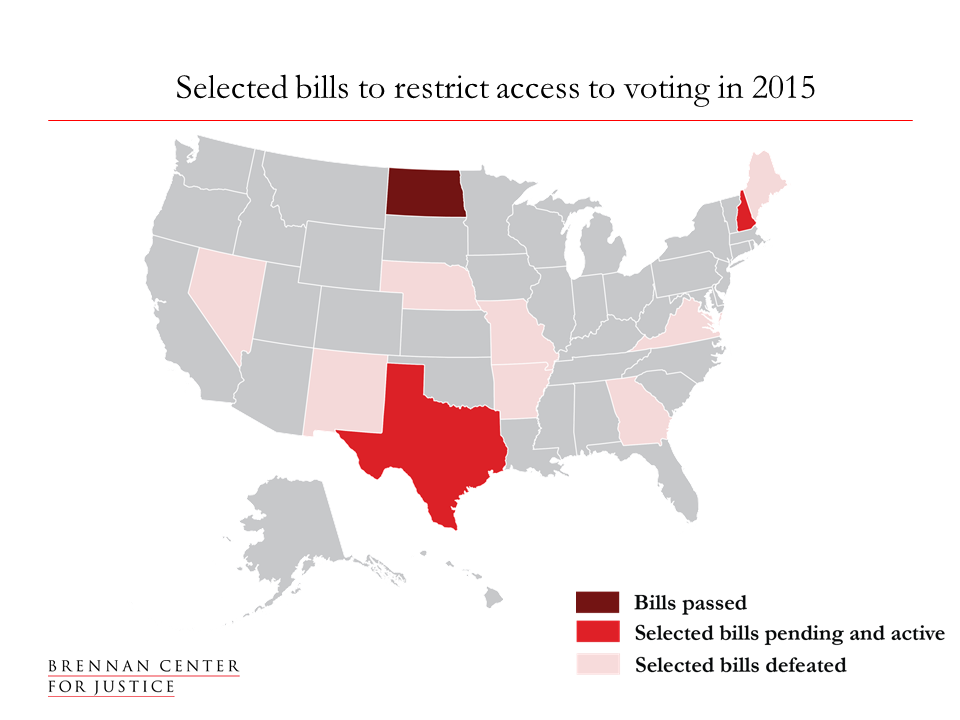 Note: If a state falls into more than one category, the map reflects the legislation that has advanced furthest in the legislative process.

Voter ID remains at the forefront of the voting wars, but enactment has slowed. Nearly half of the voting bills introduced so far this session that restrict access are aimed at establishing voter ID requirements or tightening pre-existing ones. Voter ID remains largely a partisan issue. Of the 52 restrictive ID bills introduced so far, most have Republican-only sponsorship. Only one state, North Dakota, passed a voter ID bill this legislative session — all others failed. Nevada, a Republican-led state without an existing strict photo ID law, had a rancorous fight. Arkansas and Missouri, where state courts struck down ID laws, had renewed efforts this session to put ID requirements before the voters as ballot questions. Voter ID bills also failed in Maine, Nebraska, and New Mexico.

Only one restrictive bill has been enacted thus far. This session, North Dakota passed a bill making its already-restrictive voter ID law even more onerous for voters. Thus far, this is the only restrictive law passed and signed, and it is noteworthy that it exacerbates existing restrictions rather than imposing a new one. This stands in contrast to recent prior years, which saw numerous burdensome voting bills at around this time of year. As amended, North Dakota’s new law allows for only four forms of ID: a current North Dakota driver’s license or non-driver ID card, a tribal ID, and a long-term care certificate. Persons stationed or living outside of the country can present a current military ID or passport. The ID requirement applies to absentee voters, with a narrow exception for voters with disabilities unable to travel to get an accepted ID. In those instances, a disabled voter may obtain an absentee ballot without ID, but only if another eligible North Dakota voter confirms in writing that the absentee voter is eligible to vote.

As court battles continue, state legislators are also waging wars against voting restrictions. There are ongoing lawsuits over new voting restrictions in Arizona, North Carolina, and Texas. In a few states, legislative battles happened alongside those court fights. The most interesting example comes from Texas, which has a high-profile court battle over photo ID. The Texas legislature enacted a bill that would provide a certified copy of a Texas birth certificate free of charge to a voter who states she is seeking it to obtain an election identification certificate, a minor adjustment. More impactful ameliorative bills failed to pass. More alarming, a bill passed by the Texas legislature would exacerbate the restrictive ID law by eliminating non-expiring photo identification cards for the state’s senior citizens. There are also bills pending in North Carolina — which has a trial beginning this July over new voting restrictions passed in an omnibus law in 2013 — to restore some early voting hours cut by the challenged law and to expand the list of IDs accepted to vote, but neither is active. In Arizona, where there is an ongoing suit over a requirement that voters present documentary proof of citizenship before registering, legislators introduced bills to repeal or mitigate the burdensome law, but the session expired with none of the bills progressing.

Legislators from both sides of the aisle introduced and supported numerous voting bills expanding access to the ballot box as well. Of the 464 bills enhancing access that have been introduced or carried over this legislative session, 33 are active in 16 states. 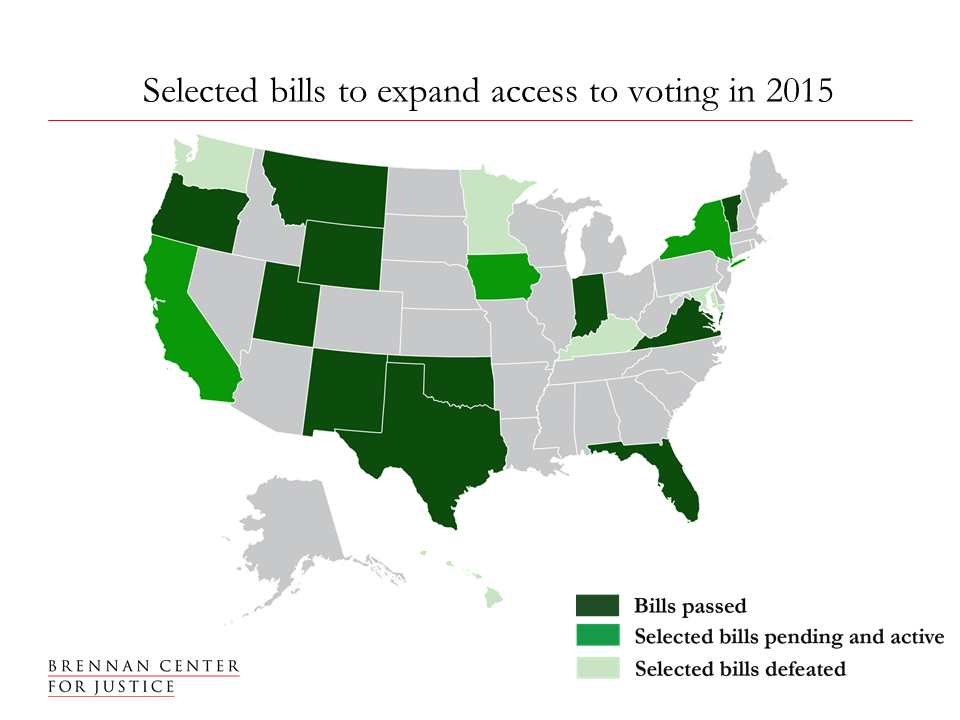 Note: If a state falls into more than one category, the map reflects the legislation that has advanced furthest in the legislative process.

Oregon triggers a surge of automatic registration bills. In March, Oregon passed a breakthrough law to modernize voter registration by automatically registering eligible citizens who have driver’s licenses (and do not ask to remain unregistered). Soon after Oregon’s bill was introduced, 14 additional states — Alabama, Arizona, Arkansas, California, Georgia, Illinois, Louisiana, Minnesota, New Jersey, New York, Ohio, South Carolina, Texas, and Vermont — plus the District of Columbia introduced bills that would automatically register citizens who have, apply for, or update driver’s licenses, and that information would be electronically sent over. In some states, such as Georgia, Illinois, and Ohio, the legislation would register citizens who have conducted business with other government agencies as well. The bills vary as to the specific mechanism by which individuals are registered, and other details — for instance, when and how an individual may opt out of registration. But all seek to reduce the burden on individual voters and instead require the government to ensure eligible citizens are registered.

Other reforms are gaining bipartisan support. In Vermont, a bill to establish Election Day registration was enacted on a bipartisan basis. Indiana enacted a bill, with bipartisan support, to allow state agencies that issue SNAP and TANF benefits to electronically transfer voter registration information to election officials (which is currently in place only at the DMV). A bill to restore voting rights to people with past criminal convictions passed the Maryland legislature in April by a substantial majority and with some bipartisan support, but was vetoed by the governor. The legislature will have the opportunity to override the veto when it is back in session; the bill passed the State Senate with enough votes to override a veto and the House only two short of the necessary amount. In Minnesota, a bill restoring voting rights with bipartisan co-sponsorship advanced before being defeated.

Selected Bills to Enhance Voter Access Pending and Active in 2015

These voting law changes come amid a high-pitched battle over voting rights.

Since the 2010 election, 22 states have new laws making it harder to vote — ranging from photo ID requirements to early voting cutbacks to registration restrictions — and 17 states will have them in place for the first time in a presidential election in 2016. Those 17 states are: Alabama, Arizona, Georgia, Indiana, Kansas, Mississippi, Nebraska, New Hampshire, North Carolina, North Dakota, Ohio, Rhode Island, South Carolina, Tennessee, Texas, Virginia, and Wisconsin.*

*Note: This list was updated to include Arizona in March 2016. 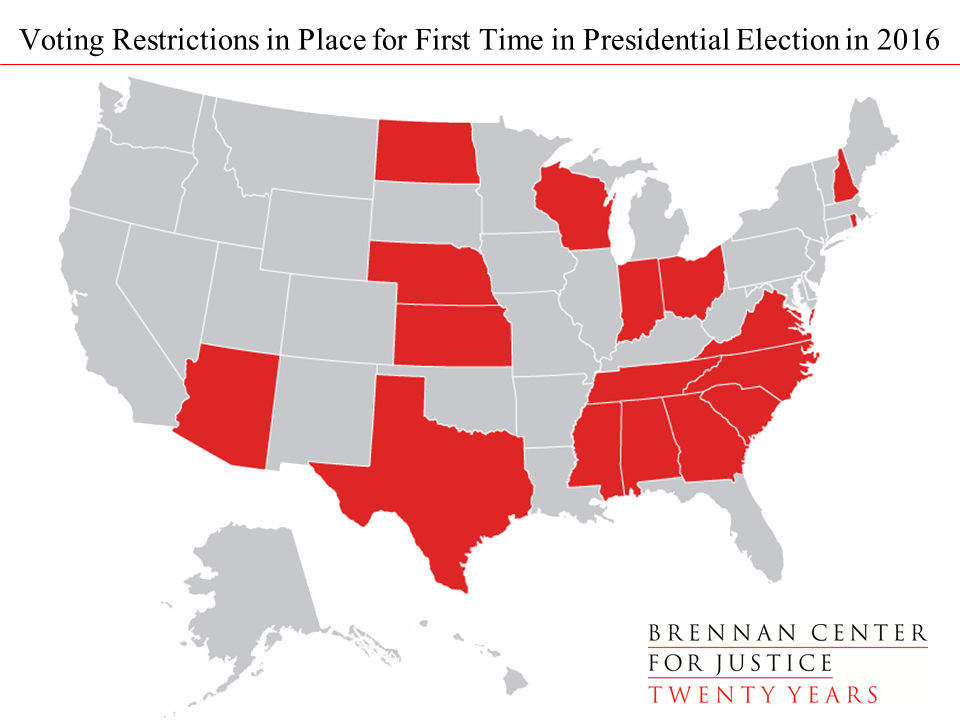 There has also been some positive momentum to improve voting. After long lines marred the 2012 election, 23 states plus the District of Columbia passed new legislation to improve access to the polls. 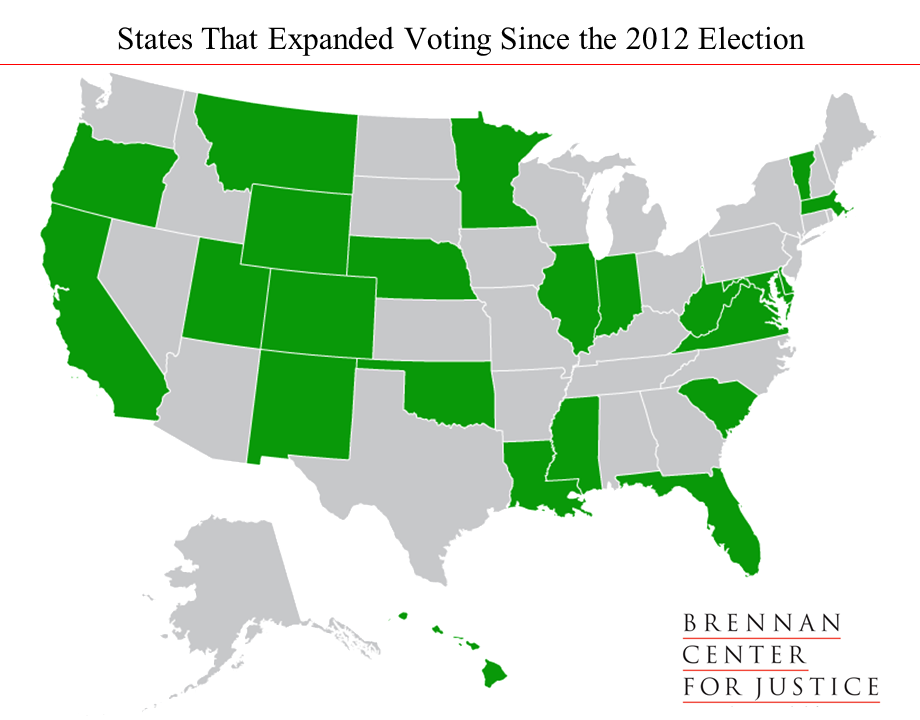