Cross-posted on the Texas Tribune

The Voting Rights Act, which became law 50 years ago this month, is rightly celebrated for helping expand the electoral power of African-American and Latino communities across the United States. But those gains likely would not have happened, or would have been much diminished, if another parallel revolution hadn’t taken place at the same time.

That revolution is the one that started with the Supreme Court’s 1964 decision in Reynolds v. Sims, which required states to end discriminatory redistricting practices that overrepresented rural areas and small towns in state legislatures while underrepresenting the booming urban centers to which African-Americans and immigrants — and Americans of all sorts — were increasingly flocking.

In the 50 years since the Supreme Court’s representation revolution, it has been a bedrock of redistricting law, followed in Texas and virtually every state, that districts should be drawn to have the same numbers of people. As a result of that revolution, legislative seats moved from rural regions to more populous cities and fast-growing suburbs, helping to create districts where minority communities — newly empowered under the Voting Rights Act — could make their voices heard.

But that principle is under attack today in Texas in a case that the Supreme Court will hear this fall, in which a group of litigants (backed by the same lawyers who are challenging the University of Texas at Austin’s affirmative action program) argues that districts should be drawn to contain not equal numbers of people, but equal numbers of eligible voters.

The Texas litigants in the case, known as Evenwel v. Abbott, claim that the current Texas Senate map is unconstitutional because up to half of adult Latinos in urban areas like Dallas and Houston are non-citizens, meaning that many Latino-majority state Senate districts have significantly fewer actual voters than non-Latino districts. 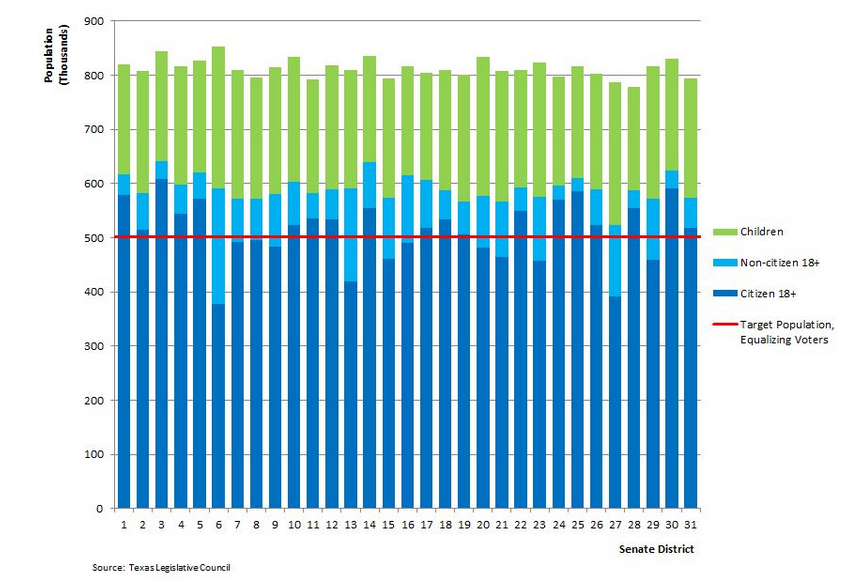 But changing the rule would undermine both the representation revolution and the Voting Rights Act. Because of the concentration of children and immigrants in cities and suburbs, drawing districts on the basis of eligible voters would shift representation back to less-populated areas, recreating the very sort of representational inequalities the Supreme Court struck down in the 1960s. Moreover, because Latinos in places like Texas are often geographically dispersed, the need to find voters to add to Latino-majority districts would make it harder to create or maintain such districts. While districts could still be drawn, they would likely be more open to the challenge that they were unconstitutional racial gerrymanders.

And distilled to its essence, the Texas litigants’ beef can be hard to understand. To be sure, there are voter disparities in the Texas Senate map. But it’s hard to argue that the situation in Texas today is anything like the problems that gave rise to the malapportionment cases of the 1960s.

Before Reynolds v. Sims, the U.S. suffered from a dramatic malapportionment crisis that disempowered large parts of its population in ways that are hard to imagine today. By 1960, for example, Los Angeles County’s population had boomed to more than 6.1 million people, accounting for almost 40 percent of California residents. Yet under the state’s antiquated constitution, the gigantic county had just a single state senator (out of 40) in the California Legislature. Other California counties with as few as 14,000 people were also entitled to one senator, resulting in a constitutionally sanctioned gerrymander that guaranteed barely 10 percent of California voters a lock on control of the state Senate.

And California was hardly unique. Across the country, malapportionment left urban and suburban areas underrepresented in state legislatures and put rural voters in control of important policy decisions on things like schools and infrastructure.

In other words, Latinos control roughly the same percentage of Senate seats as their share of Texas’ adult citizen population. That’s a far cry from California in 1960, when Los Angeles County, with 38.3 percent of the state’s population, had 2.5 percent of its Senate seats. In fact, it could be argued that Latinos are still underrepresented in the Texas Senate. Despite a large (and growing) Latino population in the booming Dallas-Fort Worth region, the Legislature in 2011 failed to draw a district in the region where a Latino-preferred candidate has a shot at winning. Indeed, Texas does not have a single Senate district north of San Antonio where Latino-preferred candidates win.

The same holds true for the Texas House. Latinos are currently able to elect just 33 of 150 of the members of the Texas House, or 22 percent of the body. And as for seats in the U.S. House, only seven of Texas’ 36 congressional seats are reliably controlled by Latino voters — less than 20 percent of the total. 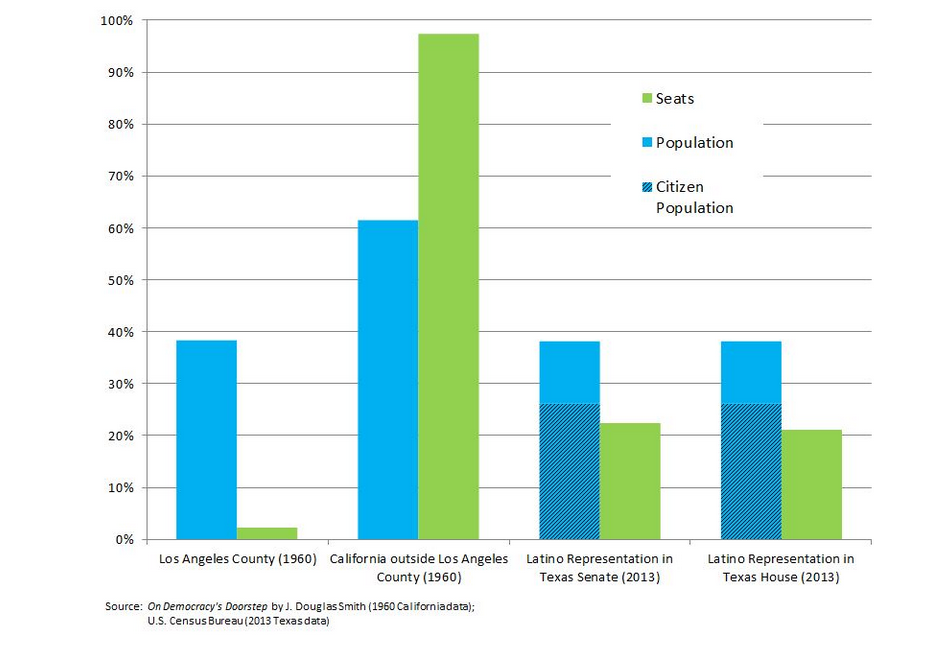 But the issue goes well beyond the share of seats. A look at the workings of the Texas Legislature shows how pernicious the argument in Evenwel is. Texans just lived through a legislative session where the issues that dominated lawmakers’ agenda were things like loosening of gun regulations and the abolition of in-state tuition rates for undocumented students — all issues important to conservative Anglo primary voters but far from the concerns that Texas Latinos say are their top priorities. And in terms of legislative power, members from Latino districts chair just one of the Texas Senate’s 14 committees and nine of 38 committees in the Texas House.

All of this is a far cry from the situation in California and other states in the 1960s in which a small number of rural voters controlled legislatures and dictated legislative priorities. By contrast, it’s easier to argue that Latino communities in Texas today have too little representation, not too much.