In the wake of the Supreme Court decision on Citizens United v. Federal Election Commission, the Brennan Center has offered testimony to House and Senate Committee Hearings, and proposed a 4-point plan to counteract the effects of the decision and restore the primacy of voters in our elections and the integrity of the electoral process.

The Brennan Center staff testified at three different Congressional Committee meetings during the week of February 1, 2010.

The Brennan Center strongly endorses a four-step strategy to take back our democracy:

4. Advance a voter-centric view of the First Amendment

Senate Committee on Rules and Administration Hearing on “Corporate America vs. The Voter: Examining the Supreme Court’s Decision to Allow Unlimited Corporate Spending in Elections”, Feb. 2, 2010

The four-point plan outlined above was entered as testimony by Senator Charles Schumer before the Senate Committee Hearing held in the wake of Citizens United. Watch the entire hearing online.

You can read our submitted testimony here, written by Brennan Center Executive Director Michael Waldman and Director of the Democracy Program Susan Liss.

Yale Law Professor Heather Gerken also testified at the same hearing, and endorsed our our work and proposed reforms. Read her testimony [pdf].

Citizens United opened the door to corporate and union money in elections. To counteract this decision, and encourage further participation in our democracy, the Brennan Center strongly urges public financing for elections.

Public funding won’t come close to matching the massed funds of corporate interests that will now once again dominate elections -– but it will offer voters and candidates a chance to build an island of workable democracy in a sea of special interest money. Some of our work includes innovative plans to boost the power of small donors by matching the gifts of small donors.

NYC’s campaign finance law provides a model. For over two decades in New York City, city funds match all local small political contributions of up to $175—on a 6-to-1 basis. This boosts competitiveness and political participation. Brennan Center Counsel Frederick A.O. Schwarz Jr. administered NYC’s system for five years; he offers a first-hand view of a public financing system to remedy damage done by the Supreme Court’s recent, radical, decision.

See more of our work on Public Campaign Financing.

One critical way to counter the flood of corporate money into our electoral process is to add millions of new voters by bringing our voter registration system into the 21st century. Attorney General Eric Holder, in noting his support for this important democracy reform, said that modernizing the voter registration system would “remove the single biggest barrier to voting in the United States.”

We have a number of proposals for how to accomplish adding this many voters to the rolls.

Under the system proposed by the Brennan Center and backed by a bipartisan coalition, as many as 65 million additional eligible Americans could join the electoral system permanently – while curbing potential for registration fraud and abuse. Such an approach would automatically and permanently register all eligible citizens who wish to be registered, and provide failsafe mechanisms to give voters the chance to correct their registrations before and on Election Day.

Committee on House Administration Hearing on “Defining the Future of Campaign Finance in an Age of Supreme Court Activism”, Feb. 3, 2010 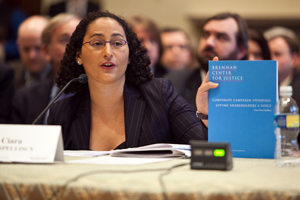 The Brennan Center suggests two specific reforms: first, require managers to obtain authorization from shareholders before making political expenditures with corporate treasury funds; and second, require managers to report corporate political spending directly to shareholders. These requirements will increase corporate accountability in two important ways. First, the authorization provisions place the power directly in the hands of the shareholders, thereby ensuring that shareholders’ funds are used for political spending only if that is how the shareholders want their money spent. Second, the disclosure requirement serves valuable information interests, leaving shareholders better able to evaluate their investments and voters better-equipped to objectively consider choices at the polls.

With greater amounts of corporate money flooding the political process, corporate accountability is more important than ever in a post-Citizens United era.

4. Advance a voter-centric view of the First Amendment 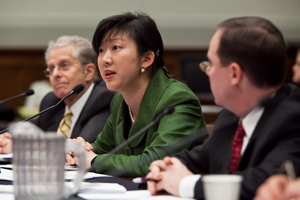 “Through focused and sustained efforts, opponents of campaign finance reform have co-opted the First Amendment to serve as a weapon in advancing the power of corporate special interests. To effectively counter this twisted version of the First Amendment, a new Constitutional jurisprudence should be developed, one that puts ”We the People" back in the center of First Amendment law."

Read her submitted testimony. Video of the hearing will be online soon.

Ms. Youn also wrote an editorial for the L.A. Times that outlines this issue.

Media Appearances from Brennan Center Staff on these Issues

● Michael Waldman in the NY Times and the Washington Post.
● Monica Youn on NewsHour and an appearance on the Bill Moyers Journal.