In 2022, state lawmakers introduced, and in some instances passed, legislation that would make state courts more political or limit their ability to serve as independent checks on governors or state legislatures. These measures undermine the critical role that state courts play in our democracy to ensure lawmakers do not overstep their authority and to act impartially when vindicating individual rights.

In some of this year’s bills, state lawmakers sought to insulate their actions from judicial review by prohibiting judges from hearing cases challenging the constitutionality of the laws they passed. In others, lawmakers sought to prevent judges from enforcing certain court decisions or to impeach judges who blocked certain laws.

In the lead-up to the Supreme Court’s decision overturning Roe v. Wade, state legislatures targeted judicial powers over abortion. In Oklahoma, for example, lawmakers enacted two anti-abortion bills that were modeled off Texas’s vigilante anti-abortion law, S.B. 8. The bills contain provisions that explicitly prohibit courts in the state from hearing lawsuits to stop the enforcement of those laws. footnoteOKHB4327OKSB1503_lo5k9ks OK H.B. 4327, OK S.B. 1503. OK H.B. 4327, OK S.B. 1503.  Lawmakers in Arkansas, Alabama, and Missouri considered (but did not pass) similar bills as it became clear that advocates would ask state courts to decide whether state constitutions protect abortion access even if the Supreme Court ruled the federal constitution does not. footnote1_90oabc7 1 AL H.B. 295, AR H.B. 1118, MO H.B. 1987.

A Brennan Center review of bills considered this year shows that legislators in at least 25 states introduced at least 74 bills that would have politicized or undermined the independence of state courts.* Of these bills, at least five were signed into law across three states (Iowa, Oklahoma, and Wyoming). footnote2_bitc2el 2 IA H.F. 2481, OK S.B. 523, OK H.B. 4327, OK S.B. 1503, WY S.F. 102. An additional 22 bills advanced in a significant way, either passing favorably out of a committee or subcommittee, receiving a hearing, or passing through one house of the legislature. (Our analysis of legislation that targeted the role or independence of state courts in previous years can be found here.)

In 2022, legislators in at least 25 states considered at least 74 bills targeting state courts, 5 of which have become law in 3 states.

In addition, two bills passed in 2021 were referred to the November ballot in West Virginia and Montana. The West Virginia measure, which voters ultimately rejected, would have prohibited state courts from reviewing the legislature’s actions in impeachment proceedings. The Montana measure, which the Montana Supreme Court ultimately blocked from appearing on the ballot, would have had voters elect justices by districts rather than statewide, opening the door to gerrymandering of the high court.

The Supreme Court’s overruling of Roe will likely continue to loom large over state courts and legislative sessions in 2023. In particular, conservative lawmakers are likely to double down on their efforts to gain an advantage in the courts in states such as Kansas and Montana, where justices who have ruled in favor of abortion protections kept their seats despite opposition in the midterms. In fact, in Montana, several bills targeting the state’s judiciary have already been prefiled, including a bill that would, according to its title, “[a]uthorize gubernatorial appointment of Supreme Court Justices.”

The following is an overview of bills introduced at the state level in 2022, broken down by how they might have weakened the independence or power of the judiciary.

*These bills were identified by the Brennan Center through CQ FiscalNote (with support from the Piper Fund) and media reports. One bill was also identified using the National Center for State Courts’ Gavel to Gavel database. Our analysis includes bills introduced in 2022 as well as any bill introduced in 2021 as part of the same legislative session, provided the bill has advanced in some way in 2022. If a bill’s description does not indicate whether the bill has progressed, that is because the relevant legislative session for that bill is still ongoing. Finally, based on recoding, this updated analysis no longer includes one bill that was included in our June 2022 analysis (OH H.J.R. 2).

Proposals in 16 states would have either enabled the override of court decisions or prohibited state officials, including judges, from enforcing particular laws or court decisions, especially those related to abortion or guns. In all, there were 16 abortion-related bills introduced across 11 states — two of which were enacted in one state. In continuation of a troubling trend that emerged in 2021 in response to the role some state courts played in safeguarding the 2020 election, a bill in one state took aim at the ability of courts in that state to ensure free and fair elections.

Bills Limiting the Enforcement of Other Laws or Court Decisions

Five states considered legislation that would have limited judges’ decision-making powers, limited judges’ control over procedural rules, or made it easier to target judges for unpopular decisions. In West Virginia, voters rejected a legislatively referred proposed constitutional amendment, passed by the state legislature in 2021 and placed on the November 2022 ballot, that would have taken away state courts’ authority over impeachment proceedings.

In one state, a bill would significantly reduce judicial branch resources in retaliation for the state high court’s rulings in a redistricting case.

In one state, a bill would have altered methods for assigning cases in an apparent effort by lawmakers to obtain a more favorable venue for challenges to the redistricting process.

In one state, a legislatively referred state statute, passed by the state legislature in 2021 and referred to the November 2022 ballot, would have gerrymandered the state’s supreme court in response to the perception that the current court is insufficiently supportive of outcomes favored by the legislature.

Nine states considered bills that would have changed how judges are selected, making the process more partisan or political. States use several different methods to select judges. Many use independent judicial nominating commissions to vet and recommend judicial candidates as a way to help insulate judges from political and partisan pressures during the selection process. But the majority of bills considered in 2022 would have either weakened states’ nominating commissions by giving the governor more control over them or eliminated them altogether. Others would have given political actors more control over judicial selection in other ways or altered the selection process for a perceived partisan advantage.

One state is considering proposals that would alter judicial term lengths in ways that would make state supreme court justices more dependent on the legislature or voters for their job security. Currently, justices are appointed by the governor for an initial term of seven years with the state senate’s advice and consent and may be reappointed for tenure (i.e., a term lasting until the justice reaches the state’s mandatory retirement age of 70) via the same process.

Courts continued to be pulled into broader efforts to empower gun owners to carry firearms in public spaces.

Bills in Alabama (S.B. 12), Georgia (S.B. 277), Kentucky (H.B. 689), Mississippi (H.B. 597), South Carolina (H. 4968), Virginia (S.B. 61), and West Virginia (H.B. 3000) would have required courts to allow attorneys, prosecutors, judges, retired judges, or others to carry a firearm or other weapons, such as stun guns, into a courthouse even if that court had a rule prohibiting weapons. S.B. 277 passed the Georgia Senate but failed to otherwise move before the end of the legislative session. S.B. 61 was voted down by a committee of the Virginia Senate. The remaining bills all failed to move before the end of the legislative session. 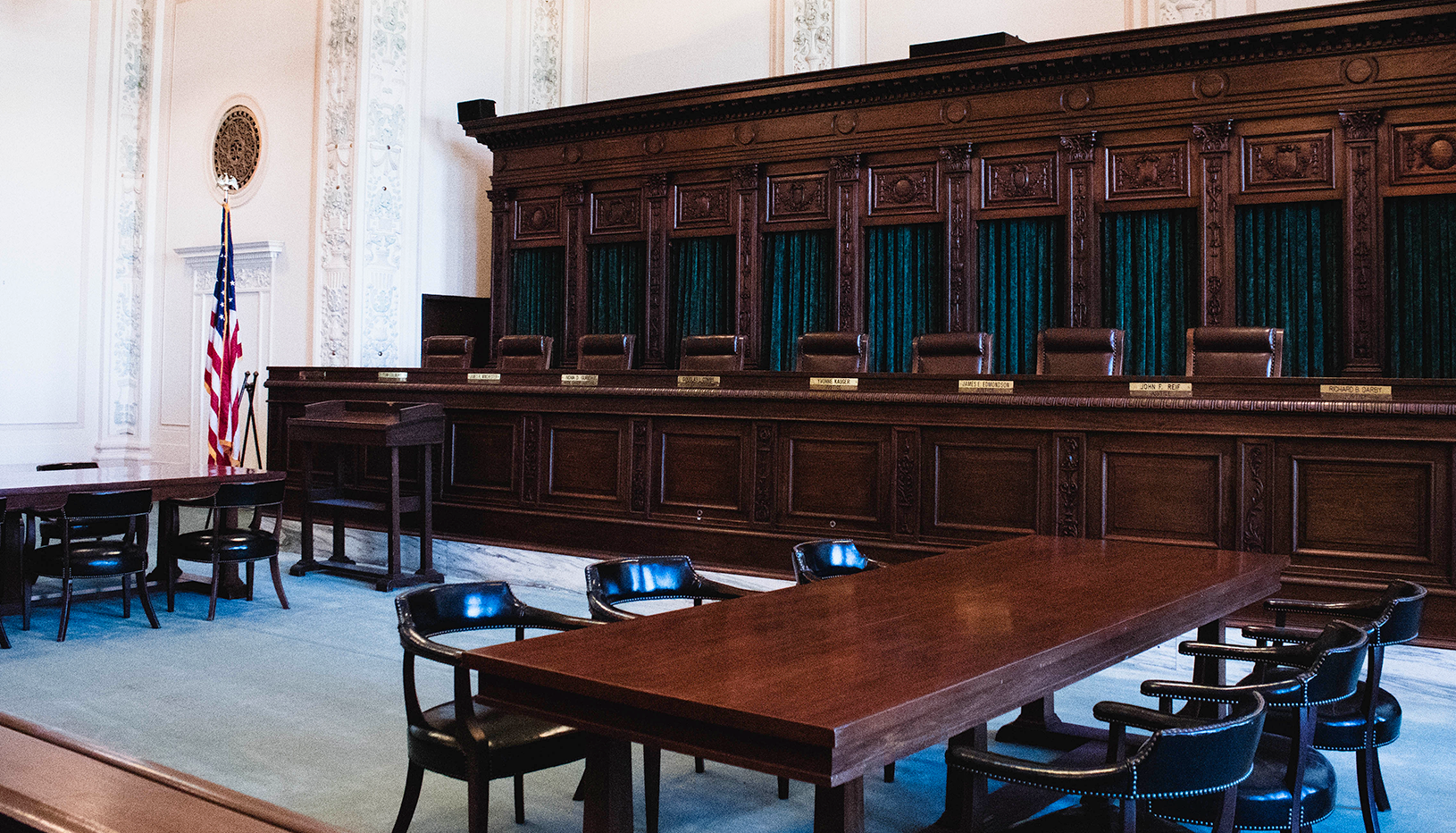 State lawmakers across the country are considering bills that would make state courts more political or limit their ability to serve as an independent check on the governor or state legislatures.