Already in 2014, it is fairly well documented that there has been “an explosion of spending on political advertising” by outside groups. A Brennan Center analysis through this year’s second quarter finds two important facts about such “independent spending” in the most competitive House districts. First, the vast majority of this spending has come from dark money sources, which do not reveal some or all of their original funders, and second, large amounts are coming from single-candidate super PACs, which can offer big donors a way of evading federal contribution limits.

Our analysis covers all candidates who raised more than $200,000 in primary or general elections in the 13 most competitive House districts.[1] We used FEC data collected by the Center for Responsive Politics to examine candidate spending through the end of the second quarter, as well as data from the Sunlight Foundation to examine outside spending for the same period. While our first quarter analysis focused on races where the candidates had together raised more than $2 million, here we focus on an entirely different sample: races in districts where the general election is likely to be highly competitive.

Across all 13 races, candidates spent a total of $21 million. Primary spending comprises a significant portion of that spending total. Most primaries are over, but there are still active nomination contests in five of these races: two each in Arizona and Florida, as well as New Hampshire’s 1st District. Outside spending in these toss-up districts constitutes roughly 20 percent of all spending through June 30th.

Since outside spending tends to peak close to the election, the $5.3 million we find in these districts so far is likely only the tip of the iceberg. Nationwide, super PAC spending is on track to match 2012, a presidential election year. Much of the independent spending we found in our sample was also focused on primaries. For example, 81 percent of the outside spending in NY-21 occurred in the last three weeks before the primary, and in CA-52, it was 70 percent. General election expenditures in toss-up races are likely to be higher than primary spending, so the full extent of outside spending’s rise will only be measurable after Election Day. 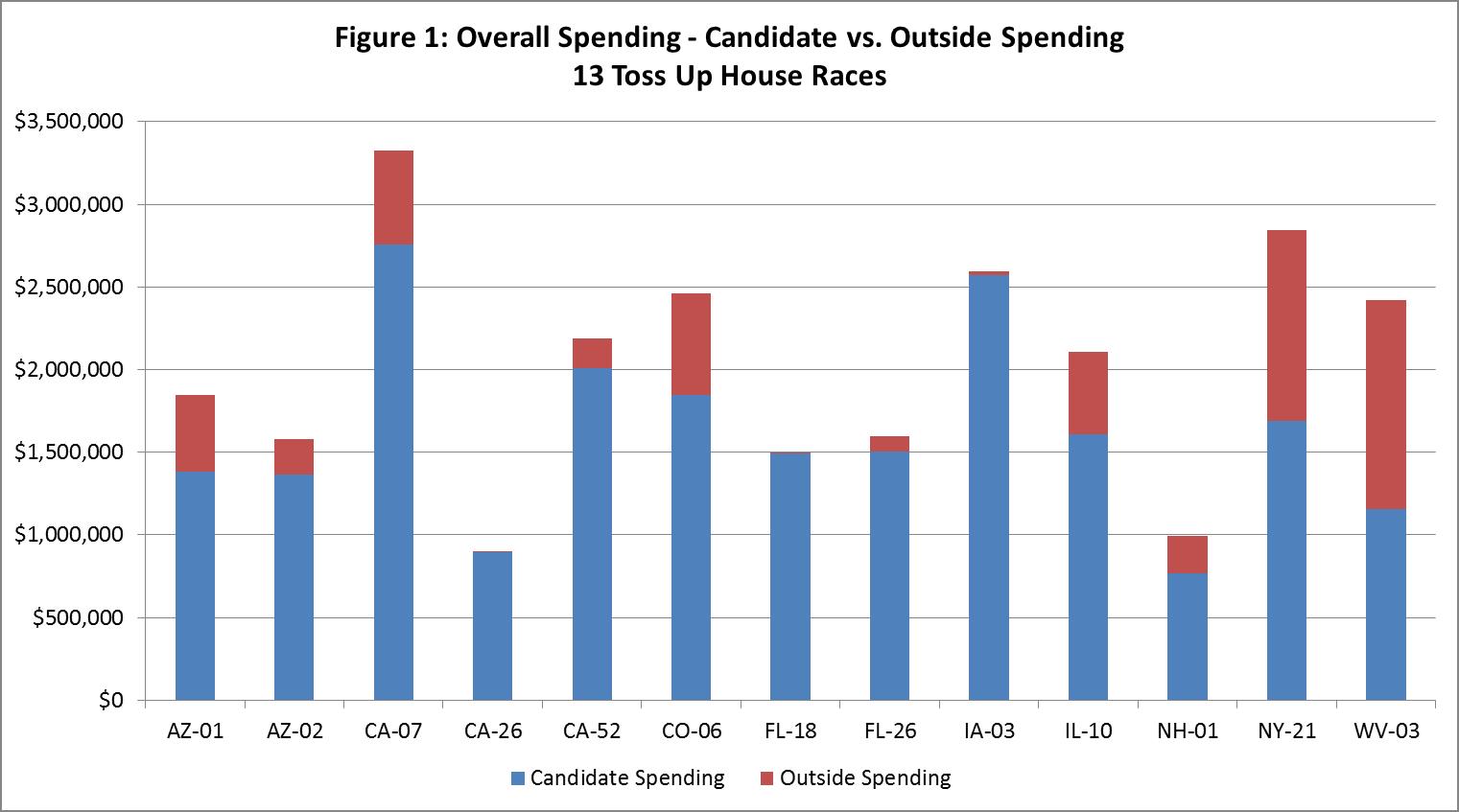 Dark money groups  — those that keep some or all of their donors’ identities hidden from the public — made about 86 percent, or $4.6 million, of the independent expenditures in the 13 toss-up districts. In seven of them, 98 percent or more of the outside money came from dark money groups: AZ-01, AZ-02, CA-07, CO-06, FL-26, IL-10, and WV-03. The great majority of dark money we identified came from just two groups: the U.S. Chamber of Commerce, supporting Republicans, and House Majority PAC, supporting Democrats.

The Chamber of Commerce, a nonprofit trade association that does not disclose its donors, has spent $17 million on the midterms so far, and about $1.5 million supporting Republicans in four of our 13 districts. These expenditures ranged from $200,000 in West Virginia’s 3rd District to $500,000 in Illinois’ 10th District, where the Chamber is the only outside spender so far.

But the biggest spender in our sample is on the Democrats’ side. The House Majority PAC’s spending patterns closely follow those of the Democratic Congressional Campaign Committee. House Majority PAC falls into the category of groups that only partially disclose their donors because it accepts money from corporations and unions without disclosing the original source of those funds. The group spent more than $2 million supporting six of the 13 Democratic congressional candidates included in this analysis. This includes the vast majority of independent spending in West Virginia’s 3rd District, $1 million in support of the Democratic incumbent. The group spent an additional $1 million across five other districts, and accounts for virtually all of the outside spending so far in AZ-01, AZ-02, and FL-26, where it is helping freshman Democratic incumbents. 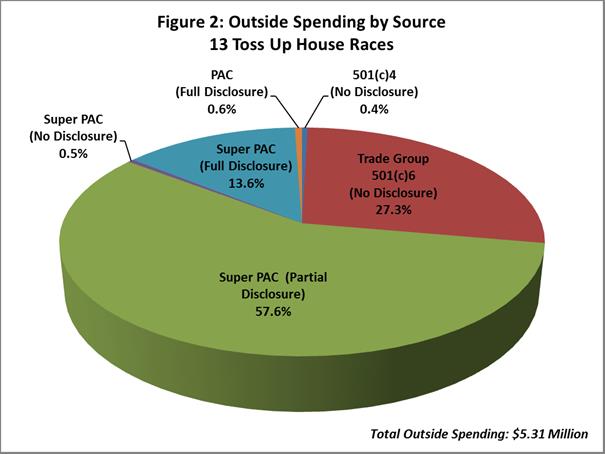 Single-candidate super PACs are a major factor in House races this cycle, and are on track to exceed their 2012 spending levels, when single-candidate groups heavily influenced the presidential race. These groups allow donors to make an end run around contribution limits. A wealthy friend—or someone who hopes to become a friend—can make the maximum contribution of $2,600 directly to a candidate, then give an unlimited amount to a super PAC devoted to electing the same candidate.  Three of the 13 toss-up districts have seen significant amounts of this type of spending, in each case focused on a primary election.

One candidate in the upcoming Republican primary for New Hampshire’s 1st District, Dan Innis, has been supported by $226,000 in spending by a candidate-specific super PAC, which accounts for all the independent spending in the race. The group, New Hampshire Priorities, receives the vast majority of its funding from a single individual, Peter T. Paul, who counts the candidate as a friend and formerly served on his finance team. Paul hit the legal limit on direct contributions to Innis’s primary and general campaigns in October, before founding the super PAC.

The Republican primary for California’s 52nd District ended in the beginning of June. Defeated Tea Party candidate Kirk Jorgensen was the beneficiary of $180,000 in independent spending, 60 percent of which came from a single-candidate super PAC, Responsible Leadership for America. The group received $150,000 from the Caster Family Trust in San Diego, which is reportedly funded by self-storage magnate Terrence Caster and his family. Caster and his wife each gave up to the $2,600 limit to Jorgensen’s primary and general campaigns.

The case of Elise Stefanik, who won the Republican primary for New York’s 21st District in June, shows how a wealthy individual can use multiple avenues to support a favored candidate without being hindered by campaign finance regulation. Hedge-fund founder Paul Singer gave $4.8 million to various groups, making him the fourth-most-generous super PAC donor in the country this cycle. He joined a handful of others from the financial industry to fund a single-candidate super PAC, New York 2014, which has spent $372,000 in support of Stefanik. Some of the super PAC’s donors, including one who put up $150,000, have also given Stefanik maximum direct contributions. In addition, Singer, his employees and other donors with whom he has ties collectively fund a committee dedicated to electing Republican women, Winning Women, which provided 41 percent of Stefanik’s fundraising from contributions in the first quarter.

Unfortunately, it is a near certainty that the FEC data on independent spending we used for this analysis underestimates the amount of outside money spent, because sham issue ads that attack or praise a candidate without explicitly calling for a vote are not required to be reported unless they are aired close to an election. This is distinct from the dark money problem. Dark money spending obscures the original source of the money, but for sham issue ads, it’s not even clear how much money is being spent, or where. Some groups issue press releases on their issue ad spending, and the Federal Communications Commission has begun to require that files relating to political ad buys be posted online, but accurate totals are not available. Simply put, no one knows how much is being spent on sham issue ads.

In four of the districts we analyzed, we found evidence of outside spending that is not included in FEC data. One of the biggest players is Americans for Prosperity, a conservative dark money powerhouse that bought half of the election ad spending in the country in 2013 and the first quarter of 2014. Americans for Prosperity has announced big ad buys to attack vulnerable incumbents in AZ-01, AZ-02, and WV-03. The Libre Initiative, a conservative nonprofit that focuses on Latino-Americans, has also attacked incumbents in Arizona, as well as the incumbent in FL-26. On the liberal side, the dark money group Patriot Majority USA pumped money into ads praising AZ-01 incumbent Ann Kirkpatrick.

Adding together the amounts from these groups’ public statements suggests that unreported ad spending in these four districts is at least $2.7 million. But with no way to confirm organizations’ claims about their own spending, it’s impossible to determine how accurate that total is.

At this point in the midterm elections, most primaries are over and the general election has yet to heat up. Even so, we find significant independent spending in districts where the seat may change hands, and that is likely to rise dramatically in the run up to the general election. It is clear that since the Supreme Court decided Citizens United, outside spending has become an incredibly powerful force in American elections.

Regardless of whether independent spending is harmful per se, there is clearly reason to be concerned with the lack of meaningful regulation surrounding it. The American public deserves information about attempts to influence their vote. But outside money largely escapes the transparency requirements that are essential to a well-functioning campaign finance system. And beyond concerns about transparency, candidate-specific groups allow wealthy interests to support their favored candidates with donations many times larger than federal limits on direct contributions allow. There should be meaningful rules to ensure that independent expenditures are truly independent, rather than a mechanism for evading contribution limits.

The Brennan Center will continue to monitor trends in independent spending as the midterm elections heat up.

[1] In our first quarter analysis of primary spending, we defined viable candidates as those who raised at least $100,000 by the end of the first quarter. This definition was based on the Sunlight Foundation’s definition of a “viable” candidate, available here: http://realtime.influenceexplorer.com/competitive-primaries/. For this analysis, we increased this threshold to $200,000, to account for the added time that candidates have had to raise funds in the second quarter, as primaries have heated up or been completed, and the general election approaches. The total raised by candidates who did not meet the threshold of $200,000 (in total amount raised) is $ 950,157. The total raised by viable candidates who met the threshold (raised above $200,000 in total amount raised) is $ 51,481,366. The eliminated candidates account for just 1.8 percent of the total money raised by all candidates, and including their funds would not have significantly impacted our analysis.