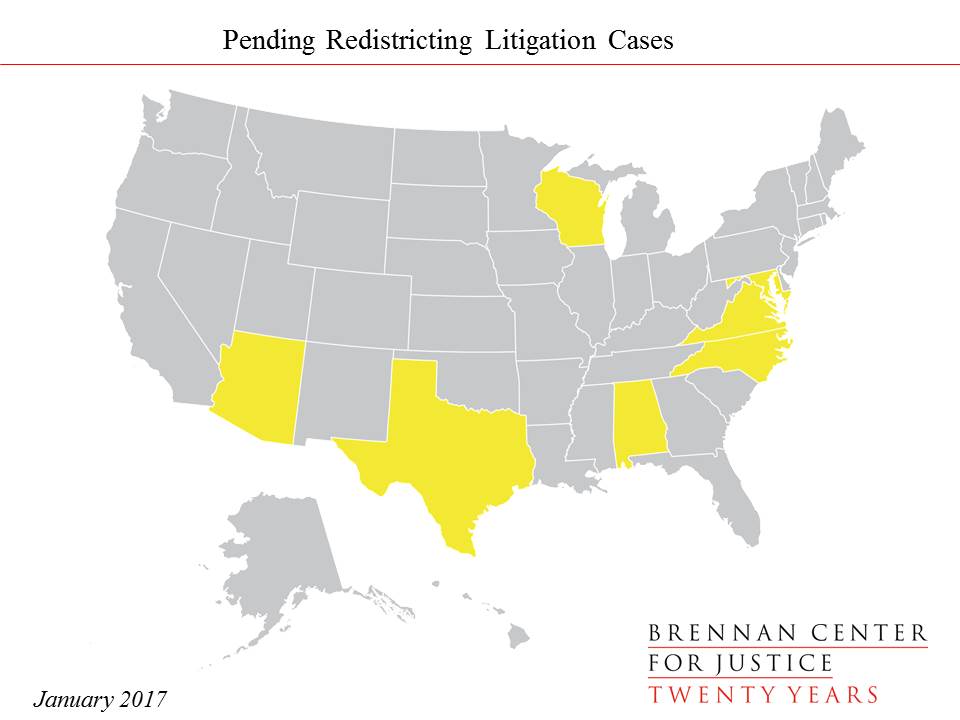 With the third election of the 2010 map cycle behind us, state legislative and congressional maps still are not final in more than half a dozen states because of pending litigation.

Last November, a panel of three federal judges declared that the state house plan adopted by Wisconsin’s Republican-controlled legislature in 2011 was an unconstitutional partisan gerrymander that violated both the Equal Protection Clause and the plaintiffs’ First Amendment freedom of association. The ruling was the first time in over three decades that a federal court invalidated a redistricting plan for partisan bias.

To evaluate the constitutionality of the map, the panel applied a three-part test that asked whether the map had discriminatory intent or purpose, had a discriminatory effect, and if there were some other legitimate reason, like the natural political geography of the state, the maps had a political skew. The panel concluded that the map displayed both bad intent and bad effect, citing evidence that the map drawers used special partisan measurements to ensure that the map maximized Republican advantages in assembly seats. Despite Democrats winning a majority of the statewide Assembly vote in 2012 and 2014, Republicans won sixty of the ninety-nine Assembly seats.

Wisconsin Republicans dispute the assertion that they intentionally engineered a biased map, arguing that partisan skews in the map reflect a natural geographic advantage they have in redistricting as a result of Democrats clustering in cities while Republicans are spread out more evenly throughout the state. The court, however, said the state’s natural political geography “does not explain adequately the sizeable disparate effect” seen in the previous two election cycles.

On January 27, the three-judge federal panel ordered the Wisconsin Legislature to create a remedial redistricting plan in place by November 1, 2017. The three-judge panel rejected the state’s request to wait until the Supreme Court heard the case. However, the panel did not grant one of the plaintiffs’ principal requests: to have judges, not lawmakers and the governor, be in charge of redrawing the legislative boundaries. The court stated in its opinion that the legislature is “the best institution ‘to identify and then reconcile traditional state policies within the constitutionally mandated framework of substantial population equality.’”

Wisconsin has said that it anticipates asking the Supreme Court to review the case.

Key pleadings for Whitford v. Gill can be found here.

A challenge to alleged partisan gerrymandering also is pending in Maryland, where a federal lawsuit challenging Maryland’s Sixth Congressional District will likely go to trial later this year.

In Benisek v. Lamone, the plaintiffs argue that the 2011 congressional map adopted by the Democratic-controlled legislature violates Republican voters’ representational and associational rights guaranteed by the First Amendment because lawmakers deliberately targeted and punished voters who supported Republican candidates when drawing district lines.

According to the plaintiffs, lawmakers intentionally used information about voters’ histories and party affiliations to place Republican voters in districts where they were outvoted by Democrats, and thus flip a reliable Republican district into a safe Democratic seat.

Last August, the three-judge panel hearing the case denied the state’s motion to dismiss and held that a map could be a partisan gerrymander violation of the First Amendment if the plaintiffs could satisfy a three-part test laid out by the court.

Discovery is currently underway at the district court, and the current expectation is that the court will hold trial in the case late this spring or summer.

Key pleadings for Benisek v. Lamone can be found here.

In North Carolina, three cases are pending that challenge the 2016 remedial congressional plan adopted by the North Carolina legislature to replace an earlier plan struck down by courts as a racial gerrymander.

The three-judge panel in the racial gerrymandering case denied the plaintiffs’ objections saying that the court was not in a position to “resolve this question based on the record before it,” and the plaintiffs appealed to the U.S. Supreme Court.

The Supreme Court will likely decide whether to take the appeal this spring or summer, once it has issued its opinion in the McCrory racial gerrymandering appeal.

Key pleadings for Harris v. McCrory can be found here.

In the meantime, groups of plaintiffs led by the League of Women Voters and Common Cause filed two additional cases – both currently pending in the Middle District of North Carolina – that also challenge North Carolina’s 2016 remedial map on partisan gerrymandering grounds.

A pre-trial conference is scheduled for early February in both cases, with a joint trial expected later in 2017.

Key pleadings for League of Women Voters v. Rucho can be found here.

Key pleadings for Common Cause v. Rucho can be found here.

In McCrory v. Harris, North Carolina is asking the Supreme Court to reverse a three-judge panel’s ruling that the state’s original congressional map was a racial gerrymander.

The dispute in the case centers on whether Republican lawmakers unconstitutionally packed African-American voters in North Carolina’s 1st and 12th Congressional Districts when redrawing the 2011 map. The panel in the district court agreed with the plaintiffs, ruling that the legislature prioritized race over other redistricting principles and packed minorities into districts where African Americans had long previously elected their preferred candidates successfully. North Carolina rejects these findings, contending that it drew one of the districts to comply with the Voting Rights Act and the other for partisan political advantage.

The state appealed to the Supreme Court last summer and the Justices held oral argument in December at the same time they heard argument in Bethune-Hill v. Virginia State Board of Elections (discussed below).

Key pleadings in McCrory v. Harris can be found here.

In North Carolina v. Covington, North Carolina also is asking the Supreme Court to reverse the decision of a different panel of three federal judges ruling that 28 of the state’s legislative districts were unconstitutional racial gerrymanders.

In August, the panel unanimously agreed with the plaintiffs that the 2011 state map was designed to weaken the influence of black voters by unnecessarily increasing the percentage of black voters in districts where they had previously been successful in electing their candidates of choice.

The panel ordered the state to redraw these districts by March 15 and then hold a special primary and general election in fall 2017. The state submitted an emergency motion to stay the panel’s order to the Supreme Court. The court granted the motion to stay, which puts the lower court’s remedy of the special elections on hold while the appeal process proceeds.

A decision by the high court on whether to hear the state’s appeal is expected before the end of June.

In Dickson, the plaintiffs contend that North Carolina’s maps violated state and federal law and were racially gerrymandered. The plaintiffs allege the legislature used a racial proportionality target in order to determine the number of majority-minority districts that would be drawn, and required that each district meet a fixed 50% black voting age population (BVAP) percentage target. The legislature attempted to justify its actions as necessary to avoid violating Sections 2 and 5 of the Voting Rights Act (VRA).

In a 4–2 decision, the North Carolina Supreme Court agreed with the trial court that complying with the VRA was a compelling interest for the legislature when drawing its maps, and ruled that the challenged districts were constitutional.

On appeal, the U.S. Supreme Court remanded for further proceedings. The state court again ruled against the plaintiffs, however, leading them to file a second petition for Supreme Court review, asking the Court to determine whether Section 2 of the Voting Rights Act requires a jurisdiction to draw a racially proportionate number of majority-black legislative districts each with a BVAP of more than 50%. The petition is pending with the Court.

Key pleadings for Dickson v. Rucho can be found here.

The Supreme Court is expected to rule by the end of June in Bethune-Hill v. Virginia State Board of Elections, a case posing the question whether the Virginia’s 2011 House of Delegates plan unconstitutionally packed African Americans into districts.

In the district court, a panel of three federal judges ruled that race was a predominant factor in the drawing of one of the state’s African-American districts, but the legislature’s reliance on race was justified because of the state’s need to comply with the Voting Rights Act. The panel held that race was not a primary consideration in the design of 11 other challenged districts despite the legislature’s imposition of a 55% black voting age population floor for those districts. The U.S. Supreme Court held oral argument in December.

If the Court reverses the panel’s ruling, the district court could make changes to the map for the upcoming 2017 election.

The panel originally rejected claims of racial gerrymandering, but in 2015, the Supreme Court reversed in a 5–4 decision and instructed the lower court to reconsider whether the new redistricting map drawn by Alabama’s Republican-led legislature diluted the voting strength of the state’s African Americans by packing them into districts. Although Alabama was under an obligation imposed by the Voting Rights Act not to diminish the effectiveness of existing African American districts, the Supreme Court said the percentage of the black voting age population necessary to accomplish that end could not be determined by fixed rule but instead required a district-by-district analysis.

In a 2–1 decision, the panel upheld the constitutionality of 24 of the 36 challenged districts, ruling that the legislature drew the districts were conscious enough of race to comply with the Voting Rights Act, but not so conscious of race that they violated the Fourteenth Amendment. The court has ordered the legislature to adopt a remedy correcting the deficiencies in the 12 unconstitutional districts in time for the 2018 elections.

Alabama will decide in the next ninety days whether to appeal a second time to the Supreme Court.

Litigants in Texas are awaiting for a ruling in a redistricting case alleging that Texas’ state house and congressional maps violate the Voting Rights Act and the U.S. Constitution. A panel of three federal judges completed trial in the case in August 2014 but has not yet ruled.

The plaintiffs recently requested that the panel issue a decision within a fixed amount of time. The district court, however, denied that motion on January 5, and said that it would issue an opinion as soon as possible.

Key pleadings for Perez v. Texas can be found here.

Vesilind v. Virginia Board of Elections

In Vesilind v. Virginia Board of Elections, a group of citizens contend that Virginia’s 2011 legislative districts were drawn in violation of the state’s Constitution. The plaintiffs argue that the General Assembly subordinated the constitutional requirement of compactness to achieve other political objectives, such as political advantage and incumbent protection.

In September, the Virginia Supreme Court remanded the case for further proceedings, and a trial is set to take place in March 2017.

A case challenging Arizona’s congressional maps for constitutional deficiencies is preparing for trial.

Republican legislators and voters filed their first complaint in 2012, alleging the state’s independent redistricting commission did not follow mandatory, constitutional guidelines when it drew the 2011 congressional map. Plaintiffs have singled out provisions that require map drawers to comply with sections 2 and 5 of the Voting Rights Act, evaluate the competitiveness of districts, hold a meaningful public comment period, and consider the legislature’s recommendations.

The Superior Court of Arizona dismissed a few of the plaintiffs’ claims for failure to state a claim. After the plaintiffs filed a second amended complaint, the Superior Court stayed the case pending the U.S. Supreme Court’s resolution of Ariz. State Legs. v. Arizona Independent Commission. The Supreme Court ultimately issued an opinion validating Arizona voters’ right to remove the responsibility for redistricting from the state legislature and delegate it to an independent redistricting commission. Following the opinion, the plaintiffs filed a third amended complaint and the parties have filed cross-motions for summary judgment. The Superior Court has scheduled oral argument on the cross-motions for February 10.