North Carolina voting issues are in the spotlight once again, thanks to swirling questions around the use of absentee ballots in the 9th Congressional district.

Last week, the North Carolina State Board of Elections voted unanimously not to certify the 9th District’s U.S. House race — in which Republican Mark Harris leads Democrat Dan McCready by a slim margin — because of irregularities in the district’s absentee ballots.

In particular, fewer ballots were returned in the 9th District than in the rest of the state. In addition, out of the 9th District ballots that were returned, there was a higher rate of ballots that were spoiled — and thus uncounted — than in other districts, the Brennan Center’s analysis confirms. To top it off, these discrepancies appear to have disproportionately affected low-income communities.

At least three voters in the 9th District have provided affidavits stating that individuals came door-to-door to collect mailed ballots, according to reports in the New York Times. These unknown visitors allegedly told the voters that they would deliver their ballots. One voter, Datesha Montgomery, reported that she voted only for school board members and sheriff, but the woman who collected her ballot said that “she would finish it herself.” This is illegal under North Carolina law. If voters are getting help with the ballot delivery, it can only be from certain direct family members (unless one of the special rules for nursing home residents is applicable).

The state is no stranger to voting-related controversies: In 2016, a federal appeals panel struck down North Carolina’s law restricting early voting and imposing strict voter ID requirements. The panel called it “the most restrictive voting law North Carolina has seen since the era of Jim Crow.”

But the controversy over the 9th District race raises a new set of issues. Here are a few key points that should not get lost:

First, voters are not the problem.

Since 2010, 25 states have passed restrictive legislation making it harder for citizens to register or vote. These range from a strict voter ID law in Texas to shorter early voting periods in Florida. Collectively, these laws have placed the burden of election security onto individual voters and mistakenly positioned them since as the main culprits behind election fraud. There is, however, no evidence of widespread fraud committed by voters. Instead, legislation on election fraud in response to this controversy should focus on insiders or operatives with their special knowledge of how the system works; on preventing ballot tampering; and on ensuring that absentee ballots are returned.

Second, this was voter suppression, not voter fraud.

The concern should be whether there was tampering with ballots cast by eligible voters. In the case of the 9th District, three voters filed affidavits claiming someone unauthorized had collected their absentee ballots, which were later not counted because they were “spoiled.” But someone seems to be trying to do a bait and switch. There have been no allegations that the voters were not who they said they were. As a result, adding a strict voter ID law to the state constitution, as some have called for, would not fix the problem at hand. Additionally, there already are laws in North Carolina around who can collect and return a ballot. (In this case, those laws were violated because individuals who are unrelated to the voter are not allowed to collect that voter’s ballot, except in rare circumstances involving people in nursing homes.)

Third, we need to investigate whether this was the tip of the iceberg. 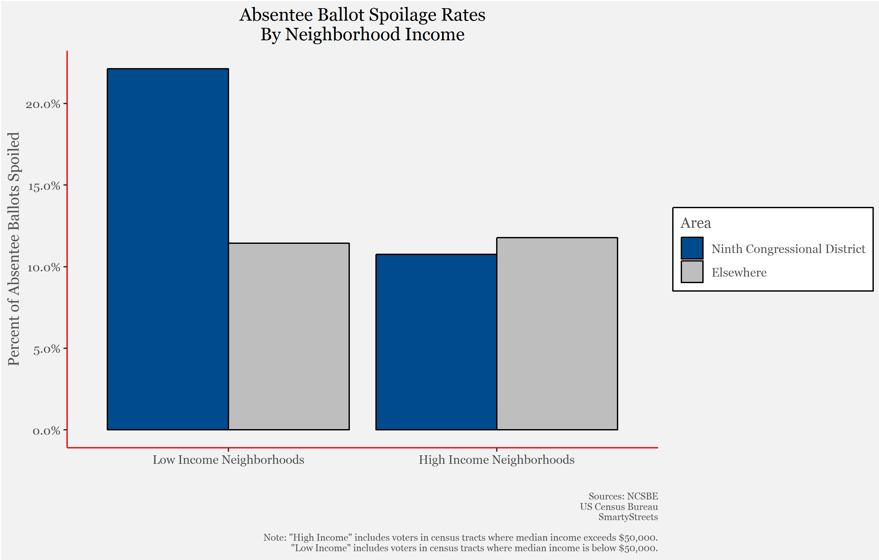 This, however, isn’t all of the story. Not only were submitted ballots from low-income neighborhoods more likely to be spoiled but these ballots were less likely to be returned at all. 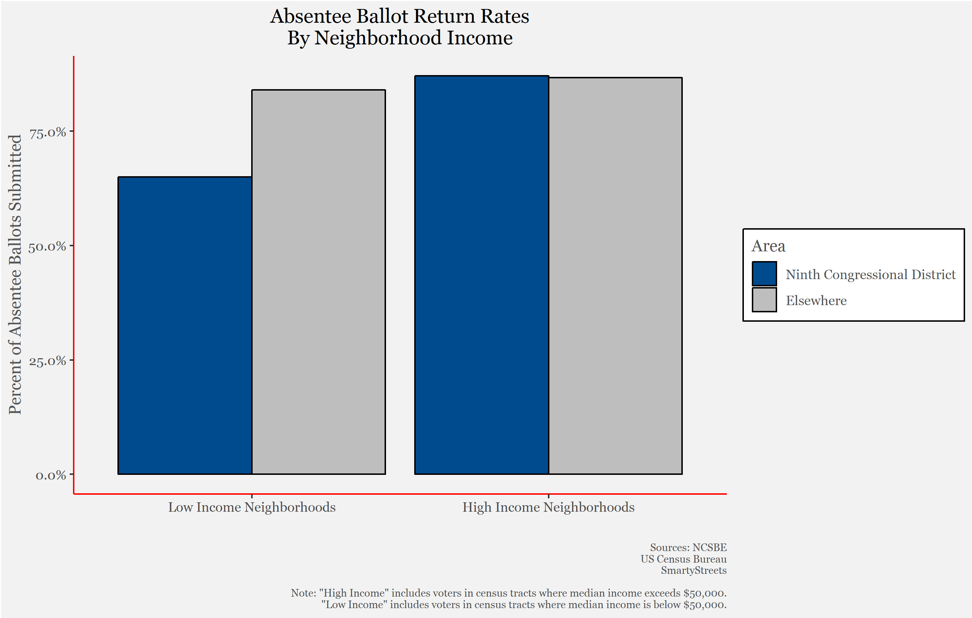 The combination of high spoilage rates among the ballots that were returned (which agrees with the affidavits filed by voters) and low return rates from these neighborhoods is cause for serious concern. To be sure, there is not yet independent evidence that criminals were collecting ballots and disposing of them, but these numbers indicate that possibility.

Nonwhite voters in the 9th District were also much more likely to submit spoiled ballots than in other parts of the state. Although this disparity is not as glaring as the disparity arising from neighborhood differences, it is still significant and worrying, and it demands further explanation. 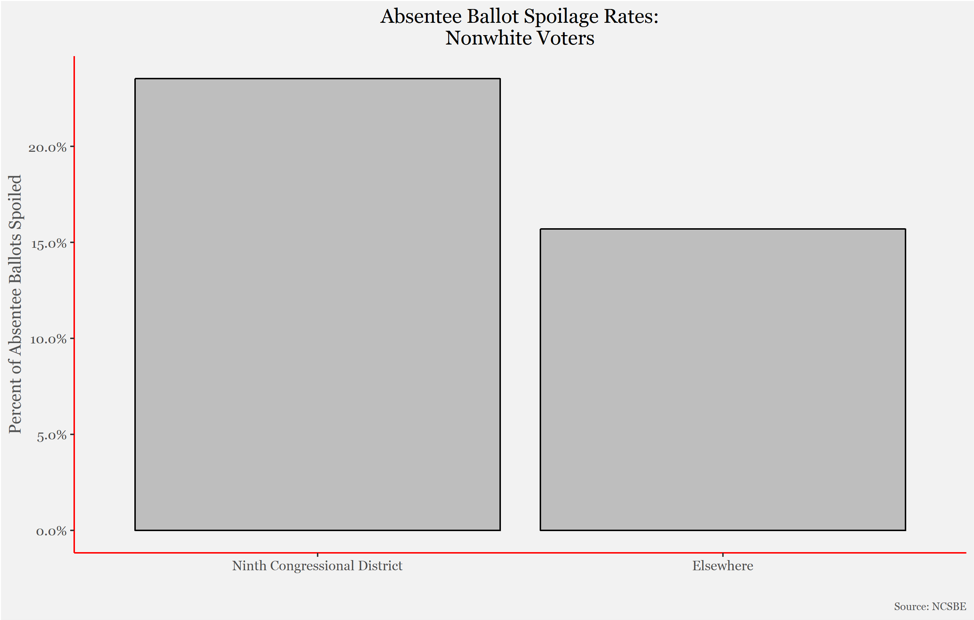 Finally, when we slice the data by political affiliation, there are problematic discrepancies in the absentee ballot spoilage rate. Republican absentee voters in the 9th District were slightly more likely to submit spoiled ballots than Republican voters elsewhere in the state. The difference, however, is much greater among Democratic voters: 18.7 percent of ballots returned by Democratic voters in the 9th District were spoiled compared to just 12.5 percent of ballots outside of the district. 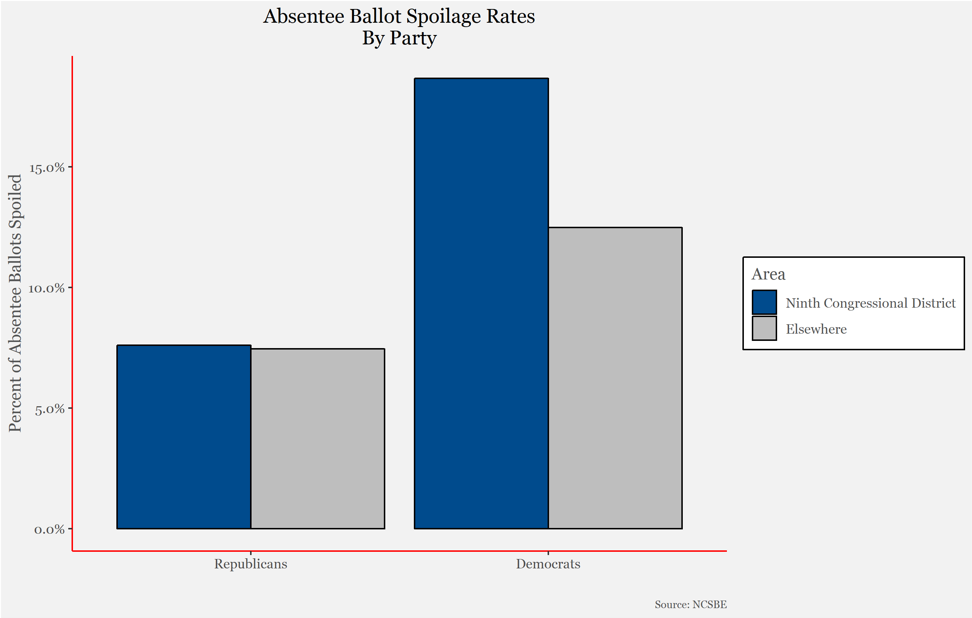 To be clear, these numbers do not alone prove systematic election fraud. They do, however, give cause to investigate these voters’ claims.

Vote suppression is destructive. It weakens our democratic institutions and cheapens our democracy. Credible claims need to be investigated, and perpetrators need to be held accountable.  It would be misguided to put additional barriers in front of the ballot box for eligible voters when our energy should be spent on actual criminals.