Public safety is the government’s first and perhaps most important duty. So it should come as no surprise that criminal justice policy came up both in the first presidential debate, and this week’s vice presidential forum. We can expect it to arise again in Sunday’s presidential town hall.

These ongoing debates about crime on the national stage are fairly new. For the last decade and a half, it had ceased to be a major topic of conversation thanks to falling crime rates nationwide.

So why is crime back in the news and on the debate stage this year? One explanation is increasing concern about recent FBI data, showing the murder rate and violent crime rate rising in 2015.

Any rise is troubling. But it would be a mistake to overstate this change — or worse, to overreact to it. Crime rates nationwide currently stand at or near lows not seen since the 1960s, as the graph below shows. The overall crime rate continues to fall, dropping in 2015 for the 14th year in a row. 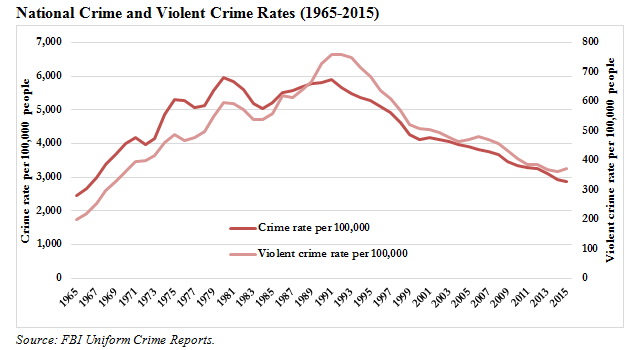 Violent crime also remains low compared to where it was 5, 10, or 25 years ago. There was a 3 percent increase in the violent crime rate in 2015, however.

Murder rates tell a similar story. The murder rate increased 10 percent last year, and currently stands near 1960s levels. But it remains well below the peaks seen in the 1990s and even below the early 2000’s. 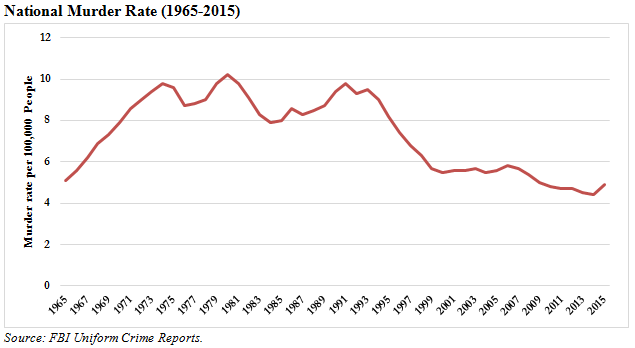 According to FBI data, a full 20 percent of this increase was due to upticks in four cities — Baltimore, Chicago, Milwaukee, and Washington, D.C. — which make up just over 1 percent of the population. (The Brennan Center found similar results in our 2015 study of crime rates in the 30 largest cities. We concluded that half of the murder increase was attributable to three cities — Baltimore, Chicago, and Washington, D.C.)

Our preliminary analysis of 2016 data showed a similar phenomenon. While murder rates in Baltimore and Washington, D.C., are expected to decrease significantly, we project that a troubling jump in Chicago will account for nearly half of this year’s 13.1 percent increase. The causes there are complex, but gangs, guns, and falling police numbers may explain some of the change.

What about the site of the next presidential debate — St. Louis, Missouri? Unfortunately, as the chart below shows, St. Louis’s experience tracks Chicago’s. Like the Windy City, St. Louis has seen crime remain relatively flat or increase slightly over the last 25 years. According to the FBI, the murder rate in St. Louis was 59.3 per 100,000 last year, or around 14 times higher than New York City, whose murder rate is continuing to fall or hold mostly steady. But unlike Chicago, the Brennan Center projects that murders in St. Louis will fall in 2016. 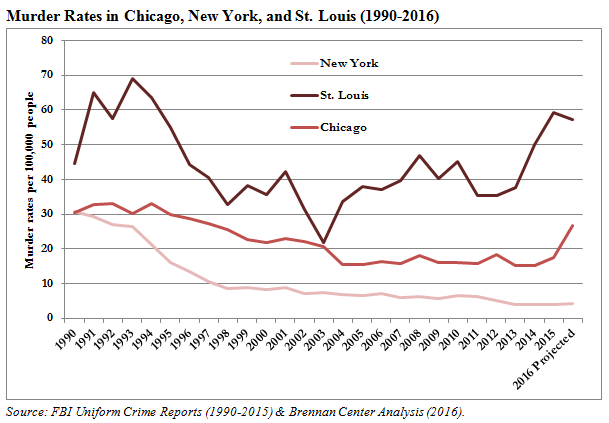 Despite the relative safety of our country today, we need to confront the challenges faced by cities like Chicago and St. Louis. As the Brennan Center showed in a report last year, that can start with expanding economic opportunity. Lower unemployment and higher incomes both correlate with falling crime.

Unsurprisingly, criminal justice policy also matters. Increased police numbers and smart, evidence-based policing tactics, such as CompStat, helped to turn the tide against crime in the 1990s and 2000s. Increasing police legitimacy and improving officers’ relationship with the communities they serve is also important for keeping murder rates down.

“Stop and frisk,” another police tactic, may sound like an easy answer, and it’s been floated recently as a solution to local crime increases. But the data, as shown in a Brennan Center analysis, tell another story. Even after ending the controversial program, New York has continued to reduce its violent crime rate.

Finally, we know that pushing incarceration rates higher is unlikely to be effective. A previous Brennan Center analysis showed the effect of incarceration on crime has basically been null for the last 15 years. Police officers agree, too.

American policymakers have made great strides toward keeping the public safe. That progress cannot stop. Hopefully, the presidential candidates can learn from history, and from data of the last 50 years, and help bring about an even safer future.