At the height of the Sanders-Clinton battle for the Democratic presidential nomination, Bernie Sanders — and the press — regularly trumpeted his extraordinary success raising campaign funds from small donors. I know someone so primed by Sanders’ vaunted $27 average donation message, that she gave him almost $1000 in $27 increments.

Sanders has blazed a new trail for future politicians, some commentators have cooed. He “has effectively outlined a political purity test for future candidates,” wrote one Atlantic columnist.

Sanders did bring in a staggering amount from small donors — more than $132 million from people who give less than $200. It represented almost 60 percent of all the money he amassed. In contrast, Clinton raised slightly less than $45 million using small donors, accounting for about 22 percent of her funds.

Having shown politicians how it should be done, following any other path in the future is tantamount to asking for a bribe or an assault on democracy, Sanders claimed after winning the New Hampshire primary: “What the American people are saying… is that we can no longer continue to have a campaign finance system in which Wall Street and the billionaire class are able to buy elections. Americans, no matter what their political view may be, understand that that is not what democracy is about. That is what oligarchy is about, and we will not allow that to continue.”

The prospect of political campaigns fueled by small donors holds enormous appeal. For some it fulfills a utopian vision. One pro-Sanders commentator gushed in the New York Observer: “While many donors expect to get something in return for their donation — ranging from influence-peddling power to winning tax loopholes or defense contracts to raising enough money to be named ambassador to France — the Sanders small donor brigades give their average donation of $27 for one purpose and one purpose only: to make our country and world a better place.”

For others, it’s a practical way to counterbalance the power of large donors, PACs and super-PACS. In fact, brigades of small donors may be the only realistic way to restore balance to campaign finance as long as Citizens United stands in the way of many laws limiting corporate and large donor contributions.

But for the professionals who run political campaigns, small donors are a pipe dream, or worse, a prescription for more extremism and dysfunction in Congress.

One senior Democrat who has run Senate offices and campaigns told me that if his current Senate candidate wanted to fund his campaign via small donor contributions, he would have to “replace policy work with more incendiary messaging.”

A Senate filled with small donor-driven politicians would be filled with people like Ted Cruz, Bernie Sanders, and Elizabeth Warren, he said. It’s “a very different model for the office and less likely to have bipartisan accomplishments….The expectations you generate [raising small donor money] makes it much harder to pragmatically build a compromise.”

But is it even realistic to believe that major political campaigns could be funded mostly by small donors? Presidential campaigns maybe. Both Sanders and Ben Carson garnered enough media attention to stoke national small donor bases that provided more than 50 percent of their funds. But how is a Senate candidate supposed to do that?

I looked at FEC reports for all Senate general election candidates from the 2010, 2012, and 2014 cycles and the current 2016 candidates to see who had managed to raise substantial sums from small donors. (See note below on methodology).

On average, the 218 candidates in the survey raised about 14 percent of all their campaign funds from small donors. (See Chart). Only four cracked the 50 percent mark from small donors: Sharron Angle, Alan Grayson, Christine O’Donnell, and Bernie Sanders. Nine more candidates over-performed, garnering a small donor percentage two standard deviations above the mean, although none exceeded 50 percent. 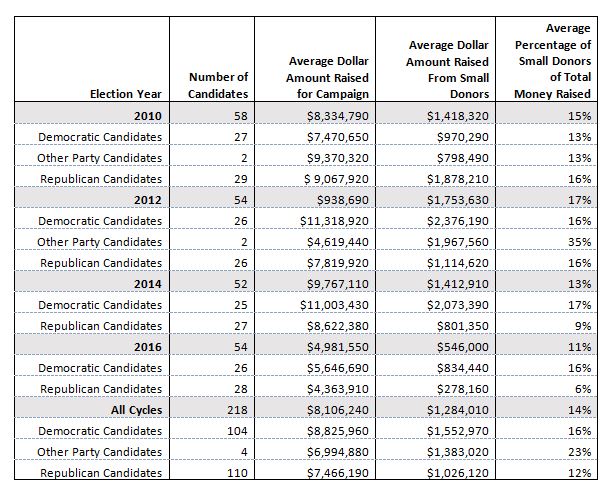 By far the most successful candidate at raising small donor money (as a proportion of funding) was Christine O’Donell, Delaware’s 2010 G.O.P. Senate candidate, who took in almost $5 million from small donors, representing 67 percent of her bankroll. A Tea Party favorite who lost by nearly 17 points, O’Donnell’s campaign won a measure of fame for running a spot in which she declared, “I am not a witch.”

In terms of total dollars raised from small donors, O’Donnell was outstripped that year by Nevada’s Sharron Angle.  Another Tea Party favorite, Angle was running against then Senate Majority Leader Harry Reid. She raked in $15.62 million from small donors, many of whom were undoubtedly eager to help bring down the man they saw as the chief Senate architect of Obamacare. Reid won by about six points.

These top four small-donor candidates illustrate what the Democratic Senate campaign strategist warned about: polarizing rhetoric drives small donor success. Two of these four candidates, Sanders and Grayson, serve in Congress but neither has a record of bipartisan accomplishment. “That requires compromise, and compromise is offensive to them on both an ideological and political/marketing basis. It would screw up their brand of ‘purity’ which would cost them millions in contributions and perhaps get them a primary challenge,” one former Democratic Senate chief of staff who now raises money for Democratic candidates said.

During the period I looked at, only one person beat Angle in the small-dollar race: Massachusetts Democrat Elizabeth Warren, who raised $19.03 million via small donations for her 2012 Senate race. However, she raised even more from large donors and PACs, almost $23 million.

The data shows that very few candidates have relied on small donors. The average amount raised from small donors was $1.28 million per race, which is nice, but won’t do the trick in most races. The rare candidate who has been able to rely on small donors has either had a very high-profile, nationalized race or has been an ideological firebrand — or both.

Sanders did not even break new tactical or technological ground with his presidential campaign. Most of his small donor money was raised using ActBlue, a Democrat-oriented online fundraising platform.

ActBlue has already been enormously successful harnessing small donor energy for politics. It boasts raising nearly $1.2 billion (and counting) since 2004. To be sure, the Sanders campaign has probably swelled the rolls of small donors who have given their credit card information to ActBlue. That might increase the small-donor base for other politicians. But I suspect the impact will be incremental not earthshattering.

A quick glance at ActBlue’s fundraising from the 2014 political cycle reveals a pattern. Though ActBlue dispersed $274.6 million that year to political candidates (and some vendors), two entities alone took in 38 percent ($105 million) of the money: the Democratic Senatorial Campaign Committee and the Democratic Congressional Campaign Committee. Not exactly your small, upstart candidate looking to revolutionize politics and political fundraising.

The individual candidate who took in the most money ($7 million) from ActBlue in 2014 was Alison Grimes, who challenged Senate Majority Leader Mitch McConnell for his Kentucky seat. Her race was, in essence, a reprise of the small donor story from the Angle-Reid race of the year before. McConnell won by about 16 points.

Small donor fundraising via ActBlue or any of the other small donor platforms is driven almost exclusively via emails or texts. But the response rate to these tools has dropped in the last few years. What provokes donations, according to a senior Democratic campaign manager, are high-octane messages that “attack, create visceral reactions in order to get people to give.” Anyone who has ever been on the receiving end of email solicitations knows how often they invoke the apocalypse. In 2014, I got ten emails from Democratic fundraisers with the subject line “All Hope is Lost.”  “Disaster” and “Outrageous” were other favorite subject lines.

So the question remains. For most federal political candidates who need to raise millions of dollars, are small donors a panacea? We know that on a state and local level small donors coupled with matching fund programs have had notable positive effects. And expanding it to the federal level could make the technique both a credible means of funding campaigns and potentially modulate the inflammatory aspect of email fundraising. But until that comes to pass, small-donor driven federal campaigns are still more of a wish than a promise.

I pulled the FEC financial receipt summary data for 248 Senate general election candidates who ran in 2010, 2012, and 2014. In addition, I looked at the current data for 60 primary and general candidates for the ongoing 2016 campaign. The total number of candidates was 308.

Any candidate who raised less than $1,000,000 was eliminated because they are not viable contestants.

That left a universe of 236 candidates. Self-funded candidates were then eliminated, which was defined as any candidate who loaned or donated more than half of the campaign’s funds. These candidates, like the low-funding candidates, could justifiably be considered another sort of campaign finance animal.

In determining what percent of the campaign funds were provided by small donors, I first defined a small donor as anyone who contributes less than $200. These donations are “unitemized individual contributions” in the FEC reports. I then determined the proportionate share of small donors to all money raised by the campaign.