Earlier this week, the Brennan Center released a report analyzing high-dollar primary elections. Some of the key factors we observed are dramatically illustrated in the Republican primary for Florida’s 19th District. This expensive early primary has largely been fueled by two sources of money: candidate self-financing and candidate-specific super PACs. The high level of candidate self-financing illustrates how individual wealth can be an avenue to a seat in Congress — a body in which millionaires now have a majority. The recent advent of candidate-specific super PACs means that the support of a small group of wealthy benefactors — or even just one — can alone make a candidate a viable contender.

Retired businessman Curt Clawson won the district’s April 22 primary with 38 percent of the vote. Clawson was unknown in politics until he plowed $3.4 million of his own money into his campaign. The primary selected the nominee for a special election to fill the seat left open by the resignation of Trey Radel; in this safe Republican district, the winner of the GOP primary is expected to take the seat.

The leading candidates Clawson defeated were Lizbeth Benacquisto, the state senate’s majority leader, and Paige Kreegel, a physician and former state representative. Self-financing aside, Benacquisto raised several times more than Clawson, but she couldn’t keep up with his independent wealth. Kreegel, who was a distant third in the fundraising race, also largely self-financed, providing almost half of his own campaign funds in the first quarter. 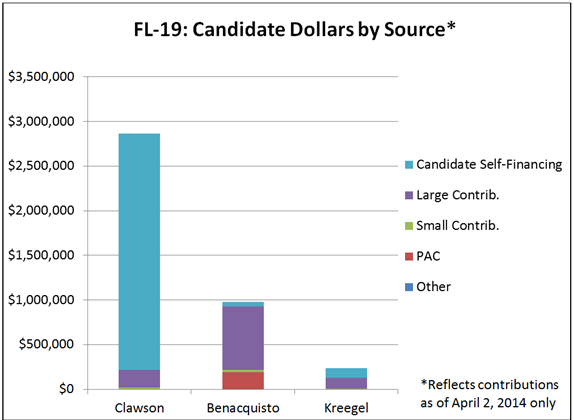 This primary race was characterized by massive outside spending. More than $2.5 million came from independent groups, with $2 million of that in the last three weeks before the election.

The vast majority of independent spending in this contest has come from super PACs. The high rate of donor disclosure in this race compared to other high-dollar primaries is striking. Interestingly, of the races the Brennan Center analyzed, this one had the highest rate of both candidate-specific outside spending and donor disclosure. Disclosure may pose advantages for donors to single-candidate groups because the target candidate will know of their support. 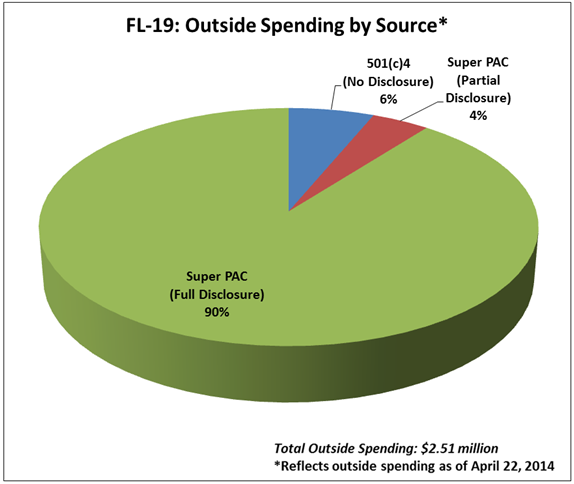 Paige Kreegel had two recently-formed candidate-specific super PACs in his corner. One, called A Bright Future, spent more than $100,000 in support of his campaign and was funded entirely by a single individual who gave the maximum contribution to Kreegel’s campaign.

But another super PAC spent far more: Values Are Vital — run by Kreegel’s friend and former fundraiser — racked up $1.5 million worth of expenditures supporting Kreegel and attacking his opponents, all in the last three months. The vast majority of Values Are Vital’s revenue came from two individuals, reportedly friends of the candidate. After funding the super PAC, they both gave maximum contributions to Kreegel’s primary campaign. 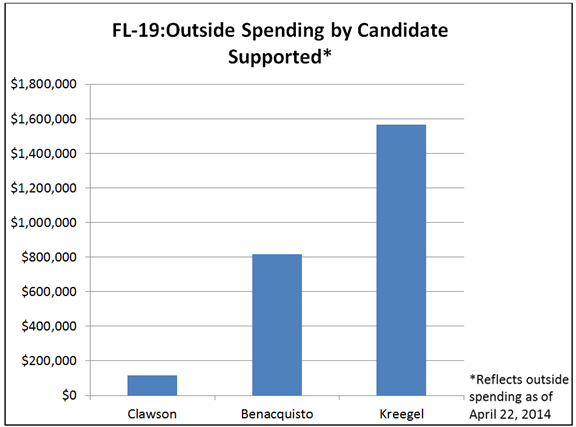 Lizbeth Benacquisto was the beneficiary of more than $766,000 in outside spending from a super PAC, Liberty and Leadership Fund, on ads either supporting her or attacking Clawson. The group registered as a super PAC with the FEC in January, listing the same address as Benacquisto’s state PAC. Its only reported fundraising has been from corporations, which are barred from contributing to federal candidates.

The PAC also had strong ties to the state Republican Party. The Tampa Bay Times traced $300,000 from the Florida GOP to Liberty and Leadership Fund through two other PACs. The PAC’s treasurer, William S. Jones, also works with other political committees connected to Republicans in the state senate.

Benacquisto and the state party have denied any relationship with Liberty and Leadership Fund, but the money trail between the two raises the issue of circumvention of contribution limits. State parties can legally donate a maximum of $5,000 to each individual candidate. The possibility of circumventing these limits by moving money through multiple organizations was at issue in the Supreme Court’s decision in McCutcheon v. FEC. Chief Justice John Roberts’ controlling opinion argued that aggregate limits are unnecessary given the base limits on contributions to individual candidates and FEC enforcement of rules about earmarking contributions. But the Liberty and Leadership Fund example — whether an attempt to circumvent limits or not — provides a model for interconnected repeat players to ensure that amounts in excess of contribution limits will be spent on behalf of a favored candidate.

The super PACs supporting Benacquisto and Kreegel were formed for this election and each spent virtually exclusively on their favored candidate. Multiple connections between the groups and the candidates make it hard to argue these groups are truly independent, even if they obey the letter of the law prohibiting coordination with candidates.

The type of campaign finance practices employed in the FL-19 primary suggest that stronger rules governing the funding of our elections are necessary. We now operate under a definition of independence that blinks at reality, and it runs the risk of making the contribution limits that survived McCutcheon meaningless.