Today, Gov. Bruce Rauner made it official: Automatic Voter Registration is coming to Illinois. His signature was the final seal of approval for a groundbreaking bill with support that was not only bipartisan, but unanimous.

Automatic Voter Registration (AVR) modernizes the voter registration process by changing it from an “opt in” to an “opt out” system. In other words, when eligible citizens interact with certain government offices, they are added to the voter rolls unless they say no. Officials then transfer registration information to the appropriate elections office electronically, instead of on paper. AVR helps get more people registered to vote, cleans the voter rolls, and saves states money.

Following its first passage in Oregon in 2015, AVR is becoming the new normal at a dramatic pace: 10 states plus Washington, D.C., have now approved AVR. This year, Nevada’s legislature passed an AVR bill that will become law if the voters approve it on the 2018 ballot. An effort to pass a bill in Massachusetts is gaining momentum. And, legislation has been reintroduced at the federal level as well. Amongst all this national momentum, Illinois is worth highlighting for several reasons.

First, Democrats and Republicans came together to enact AVR in Illinois. This is the latest example of lawmakers cooperating to make voter registration work better. In a state with a divided government, this sends an unmistakable signal: policymakers understand that AVR helps everyone. It helps voters by getting them on the rolls, increases election security by leading to more up-to-date registration records based on reliable, vetted information, and saves money because voter registration becomes more efficient.

These benefits mean AVR is gaining consensus support, particularly recently. Already this year, Congress allowed AVR legislation in Washington, D.C., to go into effect after it was passed unanimously in 2016 (by a City Council composed of 13 Democrats and 2 Independents). In June, Rhode Island became the ninth to pass AVR legislation with substantial bipartisan support. Gov. Gina Raimondo signed the bill in July.

This year’s advances followed a 2016 session that also saw widespread support for AVR legislation. In 2016, Vermont and West Virginia’s legislatures passed AVR bills with broad bipartisan support. In November of that year, Alaska approved a ballot initiative with overwhelming support after it was endorsed by high profile Democrats and Republicans in the state.

Oregon was the first to enact AVR in 2015. The reform had strong support from a Democratic Secretary of State. After a Republican took over in 2016, he embraced AVR and took steps to expand its reach. California also passed a bill in 2015, with primarily Democratic votes.

In states where AVR has been adopted without legislation, the bipartisan trend also holds. Connecticut’s Secretary of State announced implementation in 2016. Shortly afterward, Colorado and Georgia began implementing an automatic process between their driver’s license offices and state election officials.

By making AVR law, Illinois stands in stark contrast to states whose legislatures are acting in a partisan manner to suppress voting. Gov. Rauner’s signature — especially against the backdrop of the immense momentum for AVR nationwide — removes all doubt that common-sense change is possible. AVR is a bipartisan, pro-voter change with broad backing, and other states across the country should follow suit. 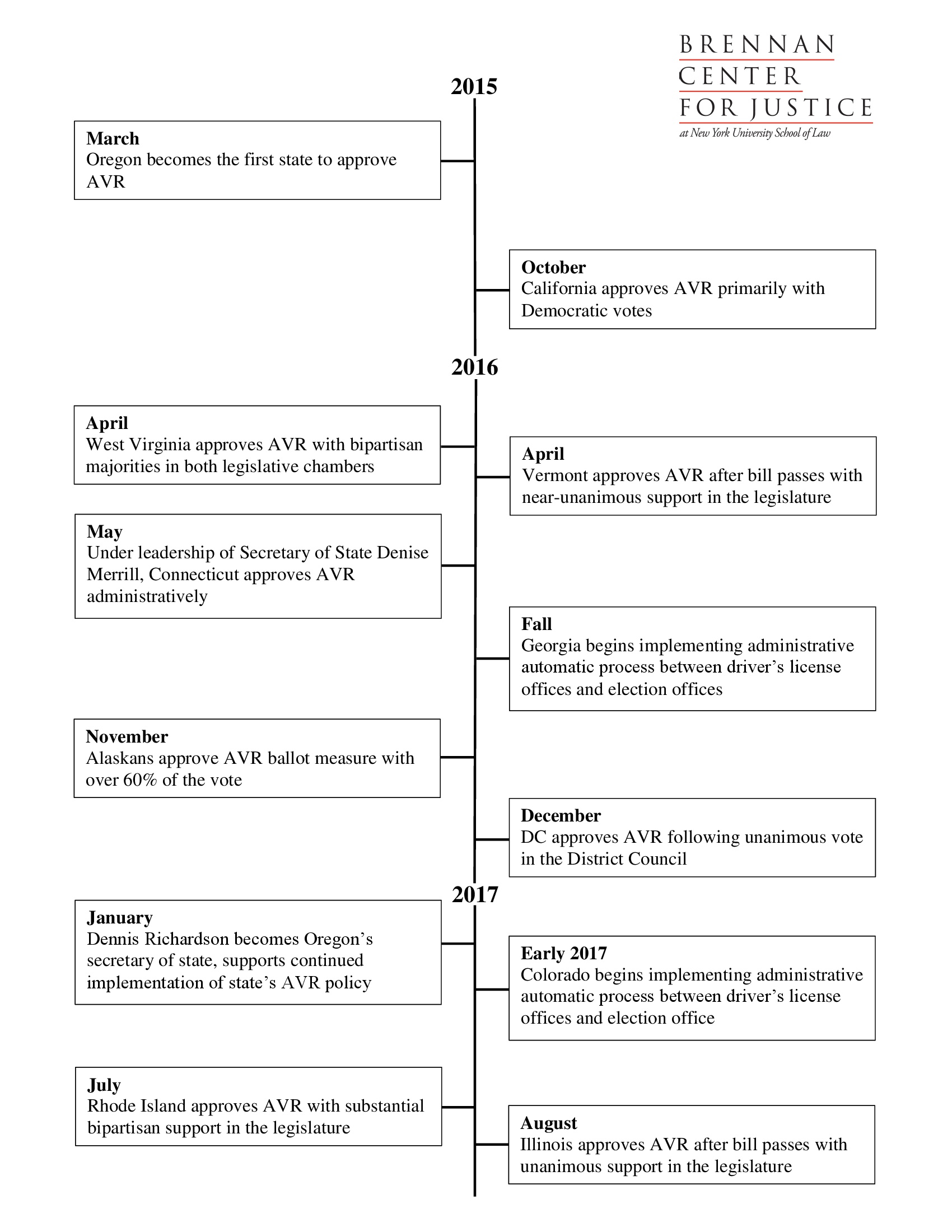 Second, this reform now covers a huge swath of the country. Two years ago, no states had AVR. Now, 1 in 4 Americans live in a state that approved automatic voter registration. That could go a long way toward signing up 50 million eligible but unregistered Americans across the country.  The number could increase even more if Massachusetts passes a bill and Nevada’s voters approve the legislation in their state. 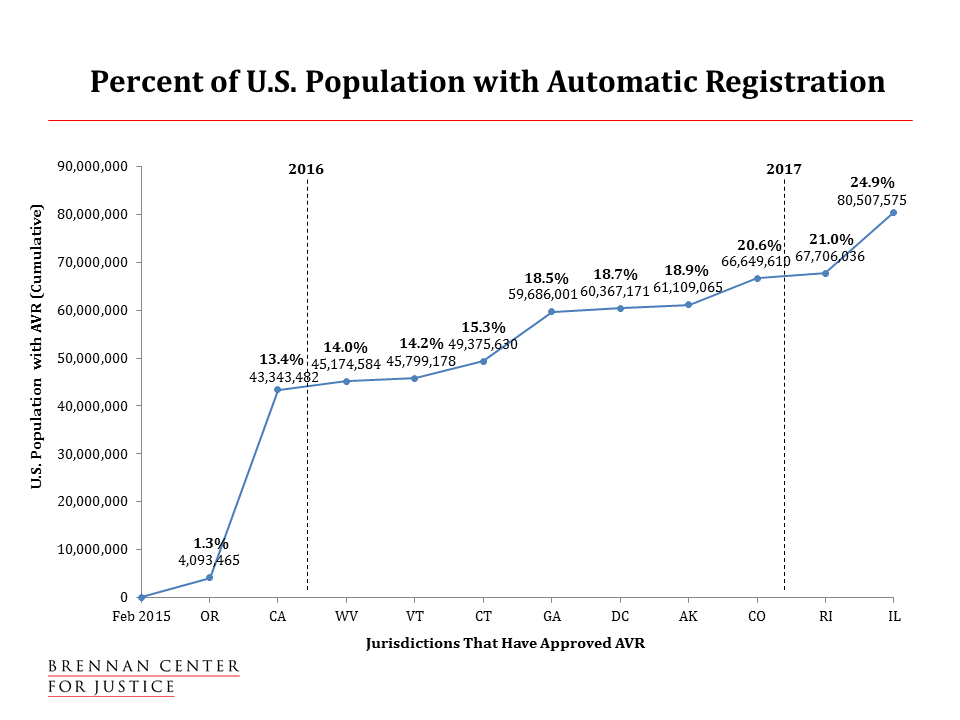 Third, Illinois’ bill is exciting because it could expand AVR beyond driver’s license agencies. Thus far, AVR has primarily been limited to DMVs, in part because those offices tend to have better data transfer capabilities (a notable exception is Alaska, which implemented AVR through the state’s permanent fund dividend). Illinois creates a framework to include offices that provide social services, such as health care. This expands the benefits to everyone: those populations that aren’t served by the motor vehicle offices get better opportunities to register. This is a major step forward in AVR that should be developed in other states.

This legislation represents a huge accomplishment for both policymakers and civic groups—the culmination of a multi-year effort to improve the registration process. As recently as 2013, Illinois had an antiquated, paper-based system of voter registration. That year, Illinois enacted online voter registration, and in 2014 the state passed a sweeping set of reforms, including same-day voter registration and expanded electronic registration at state agencies. An automatic voter registration bill passed the legislature in 2016, but Governor Rauner vetoed it, while indicating a willingness to consider a different version of the proposal. This year, reform advocates—including Just Democracy Illinois, a coalition of civic groups—worked with policymakers to find a version of the legislation on which everyone could agree. According to Andy Kang, Legal Director of Asian Americans Advancing Justice, Chicago and Co-Coordinator of Just Democracy Illinois, the AVR success story in Illinois is an encouraging model for other states. “Automatic voter registration became a reality in Illinois because a broad coalition of stakeholders were involved and engaged throughout the process,” said Kang. “Instead of being framed as political, automatic voter registration was understood—rightly—as a solution from nonpartisan reformers who want to make democracy work better.”

Now, Illinois is on its way to system of voter registration with benefits for voters and election administrators alike. Cook County Clerk David Orr has long championed this set of reforms, what he calls an “all in” approach to serving voters. Mr. Orr, who will not seek reelection in 2018 after four decades of distinguished service, explained his support for AVR: “It is a win-win. For voters, it takes the burden of registration off their backs and shifts it to the government, where it should be. For election officials, it creates a tremendous tool to clean up the voter rolls, and saves money as well.” Automatic voter registration received the support of many other local election officials as well.

The unanimous support for the bill is a testament to the hard work of the bill’s legislative champions, including lead sponsors Andy Manar and Robyn Gabel and leading Republican sponsor Mike Fortner. It all adds up to a huge step forward in the Land of Lincoln and for the entire country. Although many are seeking to advance partisan ends through efforts to restrict the franchise, there is plenty of good news for voting rights as well.