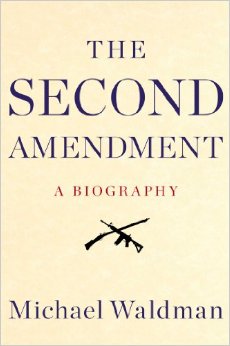 “Waldman relates this tale in clear, unvarnished prose and it should now be considered the best narrative of its subject.” — Publishers Weekly

“This thoughtful, accessible survey of Second Amendment law will be useful to anyone arguing either side of this endlessly controversial issue.” — Kirkus Reviews

“The ongoing debate about the Second Amendment and the right to bear arms continues to set off multiple explosions in the blogosphere. Waldman’s new book will not make the most zealous NRA advocates happy, but for anyone who wants his or her history of the Second Amendment straight-up, this is the most comprehensive, accessible, and compelling version of the story in print.” — Joseph J. Ellis, author of Founding Brothers

“From the founding of the Republic to the Newtown massacre and beyond, Michael Waldman vividly portrays the evolution of a nation’s passionate debate over the right to keep and bear arms. Activist, conservative justices on the U.S. Supreme Court may have thought they ended that debate in 2008, but with rich detail and crisp narrative, Waldman shows how the it continues to reverberate across the landscape with important lessons for all Americans.” — Marcia Coyle, author of The Roberts Court

“Through most of American history, the Second Amendment guaranteed the right to be a citizen-soldier, not an individual vigilante. With wit and erudition, Michael Waldman tells the story of how the Amendment’s meaning was turned upside-down and inside-out.” — David Frum, author of The Right Man: An Inside Account of the Bush White House

“Michael Waldman gives us the turbulent life story of the Second Amendment. If one clause of the Constitution better deserved a quiet retirement, it is our right to keep and bear arms, a vestige of the Founding Fathers’ concern with the role of the militia in a republican society. Yet today the Second Amendment has become one of the feistiest, most disputed clauses of the Constitution, and Waldman vividly explains why this obscure, minor provision has become so controversial.”— Jack Rakove, author of Original Meanings

“Partisan pseudo-histories of gun regulation and the Second Amendment abound. Michael Waldman’s excellent book slices through the propaganda with candor as well as scholarship. It advances an authentic and clarifying history that will surprise and enlighten citizens on all sides of the issue. Here is a smart and cogent history that performs a large public service.” — Sean Wilentz, author of The Rise of American Democracy

In recent years, the U.S. Supreme Court has handed gun rights advocates a string of stunning victories, ruling for the first time in American history that the Second Amendment of the Constitution guarantees an individual’s right to own a gun. Yet the Second Amendment remains the most misunderstood and explosive part of the Bill of Rights, which has grown only more contentious after a series of horrific mass shootings. Now, Michael Waldman, president of the prestigious Brennan Center for Justice at NYU School of Law, presents a provocative, often surprising, and much-needed history of this brief, but momentous, constitutional provision – from Bunker Hill and James Madison to Newtown and Justice Scalia – in THE SECOND AMENDMENT: A Biography (Simon & Schuster; May 20, 2014; $24.00). The Second Amendment is not what either conservatives or liberals generally believe it to be, Waldman argues, and the impact of the landmark Supreme Court rulings on gun rights and gun regulation in the future is far from obvious.

For the first two centuries of American history, Waldman observes, the Second Amendment received scant notice. Few people understood its provisions; scholars paid it little attention; and lawyers rarely raised it in court.  But over the past four decades, it has been thrust to the center of public controversy. Politicians declare themselves its “strong supporters.” The news media bristle with reports of proposed new gun laws, or new legal challenges to them. The Second Amendment has become a synonym, in powerful unspoken ways, for America’s gun culture, and a symbol of many of the deep divisions that cleave the nation.

The Second Amendment is one awkward sentence.  It reads in its entirety:

A well regulated militia, being necessary to the security of a free state, the right of the people to keep and bear arms, shall not be infringed.

For 218 years, judges overwhelmingly concluded that the amendment simply authorized states to form militias, which we now call the National Guard. Its foggy wording and odd syntax caused lawyers and scholars to debate its puzzling commas and clauses. Then, in 2008, in the case of District of Columbia vs. Heller, an opinion of the U.S. Supreme Court written by Justice Antonin Scalia declared that the Constitution confers a right to own a gun for self-defense in the home. From that point forward, the red-hot debate over gun control and its constitutionality had to take place in this new and not at all clear legal context, as it will into the foreseeable future.

Los Angeles Times: “A smart history of guns and the U.S. …[Waldman’s] calm tone and habit of taking the long view offers a refreshing tonic in this most loaded of debates.” (5/23/14)

The Daily Beast: “The true meaning of the Second Amendment…tart, concise…This typically shrewd observation stamps Waldman as not just a preeminent legal scholar but a sensible person, someone worth reading, in other words, even if you don’t agree with him.” (5/31/14)

Chicago Tribune: “An insightful look at both the historical foundation of the Second Amendment and the successful campaign by the National Rifle Association and constitutional ‘originalists’ to restore it — or reinvent it, depending on which reality you subscribe to — as a lodestar for gun rights. …The Second Amendment: A Biography is a welcome re-injection of historical context into the present debate over the rightful role of guns in American culture.” (6/13/14)

The Washington Post, Katrina vanden Heuvel: “Compelling…Published three days before the rampage in Isla Vista, Calif., that killed six and wounded 13, the book shows how we got to this moment of routine gun violence — and offers a way out.” (6/3/14) Michael Waldman is president of the Brennan Center for Justice at NYU School of Law, a nonpartisan law and policy institute that focuses on improving the systems of democracy and justice. He was director of speechwriting for President Bill Clinton from 1995 to 1999 and is the author of My Fellow Americans, POTUS Speaks, and three other books. Waldman is a graduate of Columbia College and NYU School of Law. He comments widely in the media on law and policy.