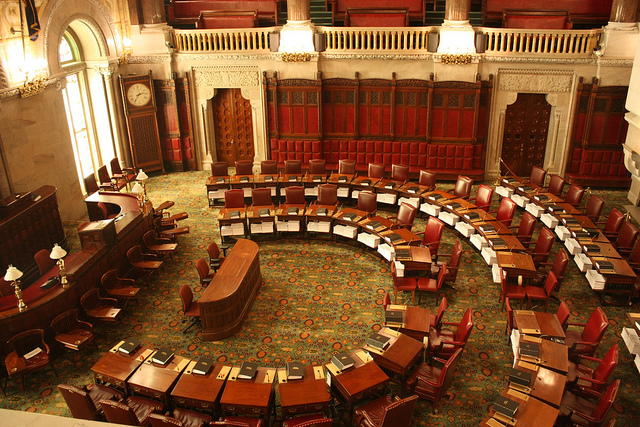 Crossposted at The Times Union

The stage is set for Gov. Andrew Cuomo to finally deliver on his longstanding promise to upend the culture of corruption in Albany.

All that remains is for him to stand firm during current budget negotiations on his proposal for public financing of elections for all state offices. With the support of Assembly Speaker Sheldon Silver, Senate Majority co-Leader Jeff Klein, Senate Minority Leader Andrea Stewart-Cousins and a significant majority of New Yorkers, the governor has everything he needs to finish the job.

The greatest remaining dangers are efforts by opponents to promote “compromise” that looks like reform but keeps special interests and corruption as firmly entrenched tomorrow as they are today. It must be stated clearly that these alternatives would not be compromise, but a costly and unnecessary abdication of leadership that will allow the status quo to persist for the entirety of Cuomo’s anticipated second term in office.

Some of the alternatives are too absurd to be taken seriously.

One suggests the way to clean up Albany is to apply the new campaign finance rules only to election of the comptroller, while leaving those writing the laws to go about business as usual.

Not even Houdini could pass off that misdirection as real reform.

The most commonly floated idea is to strip the campaign finance proposal from the budget in favor of a constitutional amendment. It worked when New Yorkers were hoodwinked out of a decade of fair and impartial electoral districts, the cynical theory surely goes, so why not for this?

The process for constitutional amendment, which requires passage by the Legislature in two consecutive sessions and then a statewide referendum, would guarantee that the new system could not be in place before 2018 at the earliest. With the “astronomical” costs of corruption described by Moreland Commission Co-Chair and Republican District Attorney William Fitzpatrick, New Yorkers cannot afford the delay.

When pressed to defend their position, amendment boosters offer the pretense that enshrining the rules in the state constitution is necessary to protect them from future attacks. The experience with the matching funds system in New York City, which has been strengthened on several occasions since it was first enacted, proves the opposite. As popular as the governor’s proposals are, they are likely to become even more popular once implemented and New Yorkers get a taste of a government that works for their interests rather than special interests.

Moreover, legislators need the flexibility to improve the system to respond to changing conditions and innovations from special interests seeking to disrupt its efficacy. The constitutional process will make changes near impossible, and lead the system to failure rather than success. Neither of these facts are lost on those promoting the amendment path.

In the alternative, opponents of reform may claim that amending the constitution is an essential matter of democratic process — New Yorkers should get a say in a decision of such importance. That is nothing more than a cop out.

The legislature has all the authority it needs to enact this policy by simple statute, and uses that power regularly on far more controversial issues when it suits it. What New Yorkers need is leadership from those they’ve already elected to represent their interests, not another chance to vote.

No one has spoken more clearly and persuasively on the importance and urgency of this reform than Cuomo himself. At a speech before business leaders last year, he said that "government is only as good and only as powerful and only as effective as the trust from the people, and we don’t have it…

In the coming weeks, the governor has a simple choice to make: Will he allow the forces fighting for the status quo to win and continue to attempt to govern without the public trust? Or will he stand and deliver on the transformation he has long promised?

When one considers the great moments of leadership in American political history, the phrase “maybe tomorrow, if they’ll let me” seems distinctly out of place.