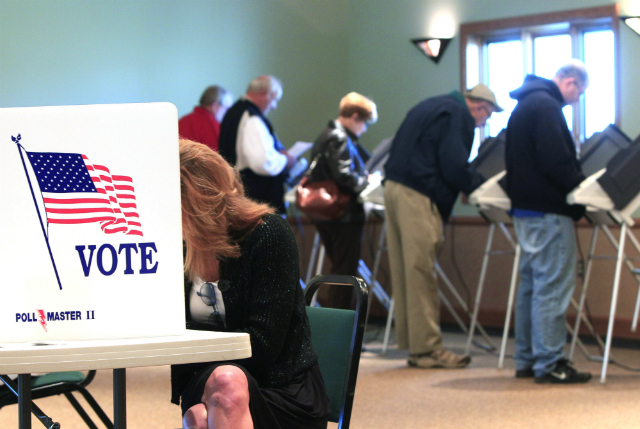 Is the tide turning on voting rights? Leading up to the 2012 election, state legislatures passed dozens of laws to make it more difficult to cast a ballot. Last year, the Supreme Court gutted a key voting rights protection. Despite ongoing shenanigans in some parts of the country, things look much brighter two months into 2014, with increasing public bipartisan support for making our elections more free, fair, and accessible. Look at what has happened this year already.

Last month, the bipartisan Presidential Commission on Election Administration (co-chaired by the heads of both President Obama and Mitt Romney’s presidential campaigns) agreed on common-sense recommendations to improve elections, including ideas to expand early voting and modernize registration. Bipartisan leaders in Congress introduced a bill to strengthen the Voting Rights Act (revisions made necessary after the Supreme Court eviscerated one of its most powerful tools against discriminatory election practices). And, this month, Attorney General Eric Holder and  Republican Sen. Rand Paul of Kentucky — unlikely bedfellows in almost any policy debate — each spoke out in favor of restoring voting rights to people with past criminal convictions.

This bipartisan trend to advance voting rights has spread to at least some states, as well. Last week in Nebraska, the state legislature unanimously approved a bill that will allow Cornhuskers to register to vote online and require the Department of Motor Vehicles to electronically transfer voter information to the county election administrator’s office. These kinds of modernization efforts deliver proven benefits. Research shows that digitizing registration increases the accuracy of the voter rolls, boosts registration rates, curbs the possibility of fraud, and saves states considerable time and money. Online registration is also more convenient for voters and election officials.

The Nebraska law puts into practice two of the voting commission’s top ideas to improve elections administration in this country. And like the commission, the state’s law exemplifies the emerging theme of bipartisan support for pro-voter reforms. The bill was introduced by Republican State Sen. Bob Krist, at the behest of Republican Secretary of State John Gale, and was supported by senators across the political spectrum in Nebraska’s nonpartisan legislature. Watching a voter-friendly bill sail through in a red state shows that policies benefiting all voters need not divide lawmakers along old and tired party lines.

Although Nebraska provides an example of the triumph of common-sense reform over partisan jockeying, the Cornhusker state by no means stands alone. Other states are also on the verge of improving voting access. In Massachusetts, a bill with bipartisan support is in the final phases of passage. This comprehensive voter registration and modernization proposal would implement online registration, create early in-person voting (another recommendation lauded by the presidential commission), and allow voters to register at their polling place on Election Day.

In fact, state legislation introduced this year shows real momentum toward improving our elections in every corner of the map. In the first three weeks of 2014 alone, at least 190 bills that would expand access to registration and voting were introduced in 31 states, compared to only 49 bills in 19 states that would restrict access, according to an analysis from the Brennan Center for Justice.

Unfortunately, although states from red Nebraska to blue Massachusetts are looking to improve election administration, some lawmakers haven’t gotten the message and are pushing retrograde voting restrictions.

The Georgia House passed a bill this week to cut the number of early voting days in municipal elections from three weeks to six days. Ohio, for example, is cutting early voting on weekday evenings and Sundays — two times heavily used by black voters. And last week, Gov. John Kasich signed two other voting restrictions. One may limit access to absentee ballots. The other eliminates Ohio’s popular “Golden Week” — during which voters can register and cast a ballot all in one trip.

Ironically, the Ohio legislature has been too busy moving along anti-voter laws to devote its energy to passing online voter registration, a reform being called for by Ohio’s Republican Secretary of State Jon Husted, and the bipartisan presidential commission.

But the actions in Ohio are out of step with what’s happening in the rest of the country. We cannot go back to the dark days of trying to shut voters out of the process. Lawmakers nationwide must work this legislative session to put aside party differences and stand together to pass laws in support of the voter. After the blows election administration and voting rights have taken in recent years, voters of all partisan stripes definitely deserve some victories.