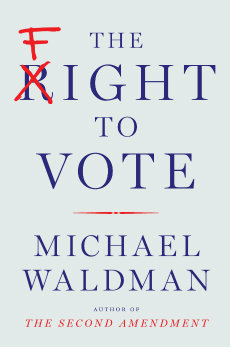 "Waldman’s important and engaging account demonstrates that over the long term, the power of the democratic ideal prevails — as long as the people so demand.” — The Washington Post

“An important history in an election year”—The Miami Herald
“An engaging, concise history of American voting practices…” — The Wall Street Journal
“Waldman draws a clear picture full of amusing anecdotes of voting and voting rights over the past 228 years. He demonstrates how the political establishment, fearing change, usually has been behind the people on this question.” — Buffalo News
"[An] important book…Waldman’s bracing account of voting rights and political equality arrives right on time for the 2016 presidential campaign.” — Booklist, Starred Review
“A compelling—and disheartening—history of voting in America… Waldman urges citizens to find a way to celebrate democracy and reinvigorate political engagement for all. A timely contribution to the discussion of a crucial issue.” — Kirkus Reviews

“With the Voting Rights Act under threat, it’s good to have a book that clarifies how tough getting—and keeping—that right has sometimes been.”— Library Journal

“Michael Waldman’s masterly history reminds us that ‘We the People’ can and must restore our experiment in Constitutional freedom.” — Pulitzer-prize-winning author Taylor Branch, author of America in the King Years

“The Fight to Vote is an important and powerful reminder that we forget American history at our peril: that democracy was hard-won and that with the right to vote once again under attack, it’s ours to lose.” — Linda Greenhouse, Knight Distinguished Journalist in Residence and Joseph Goldstein Lecturer in Law at Yale Law School

“Through this book, Michael Waldman delivers a message every American needs to hear. The struggle for the right to vote is not over. It is still being waged even today. We must use it or we can lose it.” — The Honorable John Lewis, United States House of Representatives

Michael Waldman, author of The Second Amendment: A Biography and President of the Brennan Center for Justice, is a leading law scholar and public policy activist. In his new book, THE FIGHT TO VOTE (Simon & Schuster; Hardcover; Feb 23, 2016; $28), Waldman takes a succinct and comprehensive look at a crucial American struggle: the drive to define and defend government based on “the consent of the governed.” There is no other book like it – a current, readable history of voting rights in the United States. Waldman traces the full story from the Founders’ debates to today’s challenges: a wave of restrictive voting laws, partisan gerrymanders, and the flood of campaign money unleashed by Citizens United

As we enter the 2016 elections, Waldman’s book is a needed reminder that voting rights have never been — and are still not — a guarantee. Waldman emphasizes that the fight to vote has been at the center of American politics since the nation’s founding: “It didn’t start at Selma,” he notes. From the beginning, and at every step along the way, as Americans sought the right to vote, others have fought to stop them.  Raucous debates over how to expand democracy have always been a part of American politics. We continue to see the issue come up this year: Hillary Clinton has shown a high-profile embrace of democracy reform, advocating for universal, automatic voter registration; Bernie Sanders rails against Super-PACs and wealthy campaign donors that obstruct popular representation; Donald Trump boasts about his independently financed campaign — but warns about voter fraud.

In THE FIGHT TO VOTE, Waldman addresses these hot button issues while providing a much needed context of the history behind voting rights and the varied attempts to expand (and limit) those rights over the years. Various groups and individuals have affected election laws in America since the nation was founded. As Waldman writes, “Through their stories, this book focuses on key moments, turning points when controversy eventually yielded a lurch forward — or when the country actually moved backward.  I believe we are at such an inflection point today.”