Unusually high judicial vacancy levels coupled with unprecedented workloads are burdening federal district courts like never before. Judicial vacancies have remained uniquely high throughout Barack Obama’s presidency, with annual vacancies averaging significantly higher than those experienced during George W. Bush’s presidency. As seats remain unfilled, millions of Americans who rely on district courts are being denied the justice they deserve. The President and the Senate must find a way to fill these crucial seats.

Recent public attention on federal judicial vacancies has largely focused on the appellate courts. Yet, since 2009, the slow pace of nominating and confirming judges has also precipitated a crisis in the district courts — the trial level courts that resolve the vast majority of federal cases. As of July 1, 2013, there were 65 vacancies in the district courts out of a total of 677 judgeships, creating a vacancy rate of almost 10 percent. Only 23 nominees are currently pending before the Senate, while 18 district court judges have been confirmed since the start of 2013. The Administrative Office of the United States Courts anticipates that four additional vacancies will open by July 15, 2013, followed by seven more vacancies by January 2014.

The high number of vacant judgeships limits the capacity of district courts to dispense justice and affects the millions of Americans who rely on district courts to resolve lawsuits and protect their rights. District courts are the workhorses of the federal judicial system, resolving legal disputes, conducting civil and criminal trials, and overseeing cases from filing to termination. These courts touch the lives of everyone from the small business owner in a contract dispute, to the family targeted by consumer fraud, to the artist protecting her copyright from infringement. When district courts are not functioning efficiently, it reverberates throughout our entire judicial system.

This analysis examines data on district court vacancies and judicial workloads since 1992. Its findings suggest that judicial vacancy levels are sufficiently high that it is affecting the functioning of our courts.

These findings demonstrate the urgent need for the President and Senate to act to fill district court vacancies. Indeed, our findings suggest that to fully address the increasing district court workload, more judgeships are required — further highlighting the importance of filling vacant seats now. 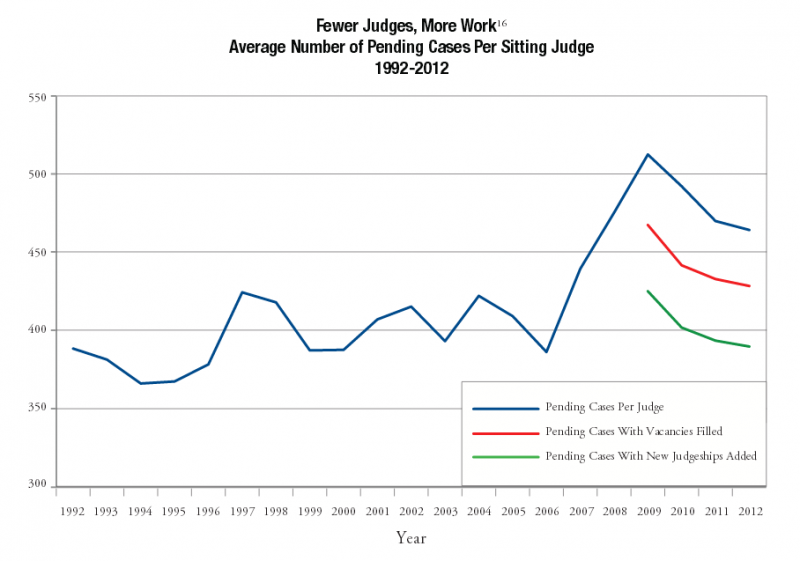