The Brennan Center first examined the growing number of federal district court vacancies in a July 2013 report, finding that these vacancies have burdened federal judges with unworkable caseloads. Additional studies were completed in November 2013 and February 2014.

Our most recent analysis, published in July 2014, featured interviews with trial court judges, court administrators, and practitioners who documented the harmful impact of high vacancy levels on the administration of justice, including case delays and reduced time for judges to spend on individual cases.

Without continued attention by the President and Senate, many federal judgeships are likely to remain unfilled for the foreseeable future. The White House and Senate should prioritize identifying nominees for unfilled judgeships and continue their recent progress in confirming qualified nominees.

*As reported by the Administrative Office of the U.S. Courts

While most attention to federal judicial vacancies has focused on the appellate courts, our district courts have also experienced high levels of vacant judgeships. District courts are the workhorses of the federal judicial system, resolving legal disputes, conducting civil and criminal trials, and overseeing cases from filing to termination.

In our most recent analysis, the Brennan Center examined 10 districts that currently have judicial vacancies or that recently had vacancies filled. Interviews with 20 chief judges, court administrators, and practitioners suggest that vacancies affect the ability of many courts to effectively and timely administer justice.

“We don’t neglect the seventh amendment, the right to a civil trial. But we tell people, if this is what you want to do, it will take time to get there.”

“Sometimes you’d like to be able to spend more time thinking and writing, or having more hearings. We just don’t have time to do that.”

“It’s a trickle-down effect. When you have a vacancy it        affects all parts of your court system.”

“It’s like an emergency room in a hospital. The judges are used to it and people come in and out and get good treatment. But the question is, can you sustain it? Eventually you burn out.”

The Need for New Judgeships

Congress has not passed a comprehensive judgeship act since 1990, and the last time that any district court judgeships were created by Congress was in 2002. Nationwide, 32 out of 94 districts have been recommended for additional judgeships by the Judicial Conference of the United States, based on the districts’ workload and self-assessment of need. When these recommended additional judgeships are added to the number of existing vacancies, districts’ “effective vacancy rates” are striking, with 20 districts in 14 states left with vacancy rates of 25 percent or higher, as of July 14, 2014. 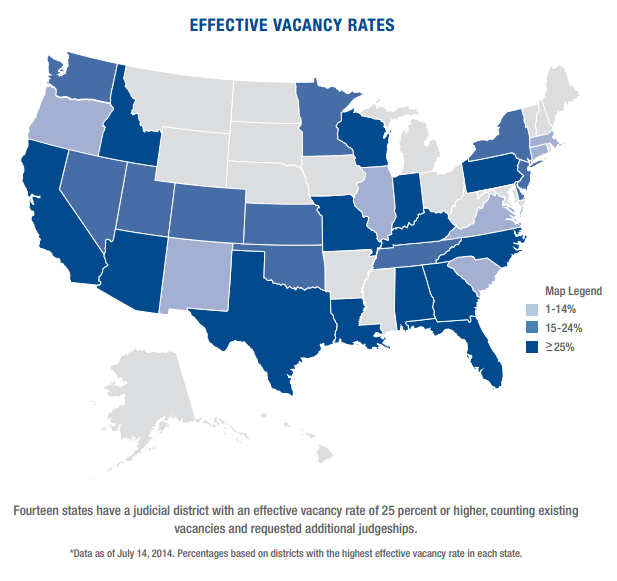