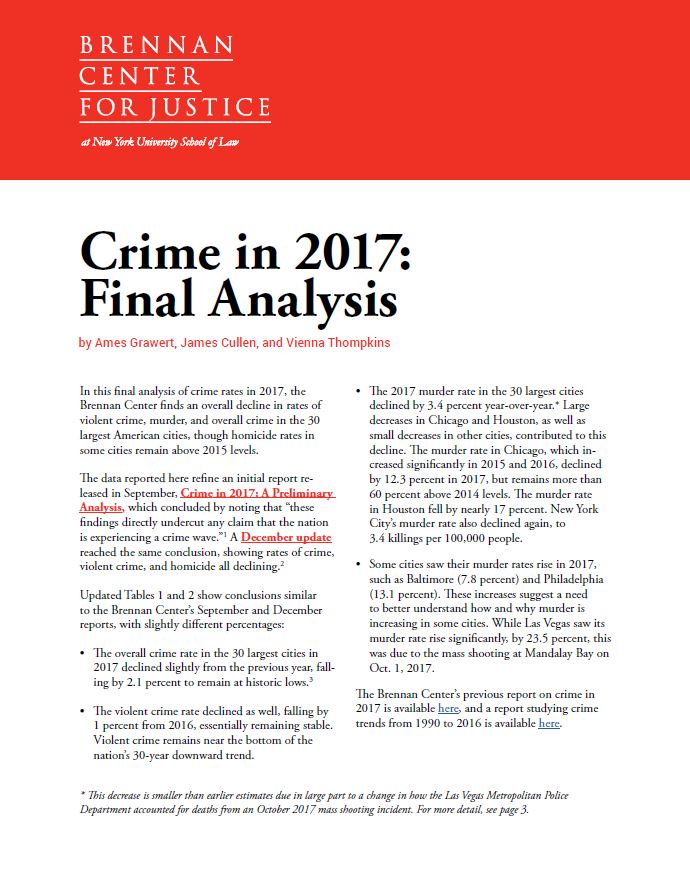 In this final analysis of crime rates in 2017, the Brennan Center finds an overall decline in rates of violent crime, murder, and overall crime in the 30 largest American cities, though homicide rates in some cities remain above 2015 levels. Download the report here.

The data reported here refine an initial report released in September, Crime in 2017: A Preliminary Analysis, which concluded by noting that “these findings directly undercut any claim that the nation is experiencing a crime wave.” A December update reached the same conclusion, showing rates of crime, violent crime, and homicide all declining.

– The overall crime rate in the 30 largest cities in 2017 declined slightly from the previous year, falling by 2.1 percent to remain at historic lows.

– The violent crime rate declined as well, falling by 1 percent from 2016, essentially remaining stable. Violent crime remains near the bottom of the nation’s 30-year downward trend.

– Some cities saw their murder rates rise in 2017, such as Baltimore (7.8 percent) and Philadelphia (13.1 percent). These increases suggest a need to better understand how and why murder is increasing in some cities. While Las Vegas saw its murder rate rise significantly, by 23.5 percent, this was due to the mass shooting at Mandalay Bay on Oct. 1, 2017.