Cross-posted on The Daily Dot

I don’t normally write about video games. I’m a civil rights lawyer, and I usually write about lofty things like privacy and national security. But that changed last week when the FBI released a comically bad video game for teens designed to stop extremist violence.

Don’t Be A Puppet, the latest release from the FBI, is an online game to help school-age kids spot homegrown violent extremists in homeroom. Sure, I know what you’re thinking: Terrorist attacks are extremely rare here in America (compared to, say, gun violence). But the bureau spent a lot of money on this, OK? So they’re rolling it out to hundreds of thousands of kids all over the country despite some concerns from beta testers. It’s a part of the Obama administration’s much-vaunted Countering Violent Extremism program, and I have to say, I was expecting more. Both the concept and design seem dated, and not in that fun, Nintendo way.

Maybe the old-school vibe is intentional. After all, hunting for radicals is something the FBI has been doing for decades, from the first Red Scare in the early 1900s to the second Red Scare after World War II. It’s a classic, really. This time around, the FBI repeats its fan-favorite mistakes of the past and adds a refreshing post-9/11 twist. 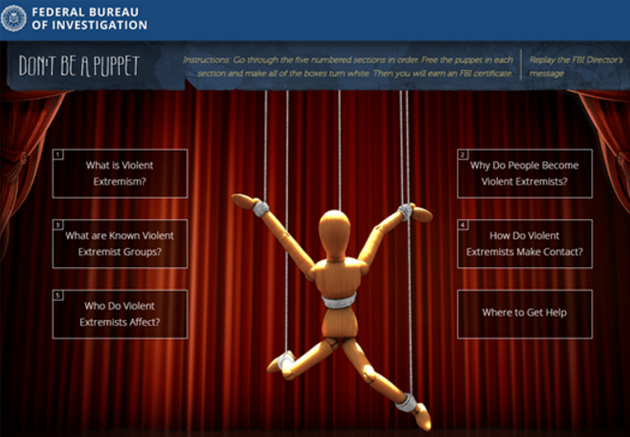 [Full disclosure: My employer, the Brennan Center for Justice at NYU, recently sued the Department of Justice to release information about Don’t Be a Puppetfollowing reports that it was discriminatory and would cause kids to look at their Muslim classmates with suspicion.]

Don’t Be a Puppet is an interactive website designed for use in social studies class, and it features a series of quizzes, puzzles, and oddly frustrating video games sure to draw eye rolls everywhere. Each of five modules that students complete gets them one step closer to freeing a marionette bound by the metaphorical strings of extremism. There is the “Distorted Beliefs Matching Game,” for example, along with assorted terrorist trivia, and my personal favorite, the “Slippery Slope to Extremism.” Yes, that’s correct, the FBI made a video game out of the proverbial slippery slope. It’s like a no-frills reboot of SkiFree from 1991, except that now you’re a pixilated goat…a goat that prevents violent extremism. As far as I can tell, there is no national security purpose whatsoever to that part of the game. 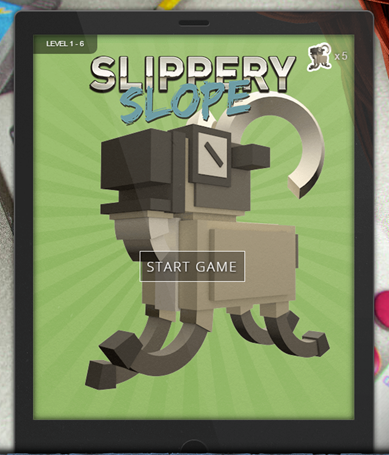 If Don’t Be a Puppet has one redeeming quality, it is that it doesn’t automatically single out Muslim Americans as the go-to suspicious population. It casts a relatively wide net, covering extremists of all stripes, from anarchists, to environmentalists, to white supremacists. But the whole effort seems to internalize one major glitch: there is no typical trajectory toward violent extremism, no set of easily identifiable warning signs that can be reduced to children’s video game.

Consider, for example, the section titled “How Do Violent Extremists Make Contact?” The FBI lays out a four-step process of radicalization (“Immersion,” “Identification,” “Indoctrination,” and “Action”) that mirrors a 2006 intelligence assessment and a 2007 report by the NYPD that were widely debunked anddiscredited as overbroad, overly simplistic, and full of methodological errors. Building on this flawed foundation, Don’t Be a Puppet then asks students to view fictional online posts and spot the potential terrorists: 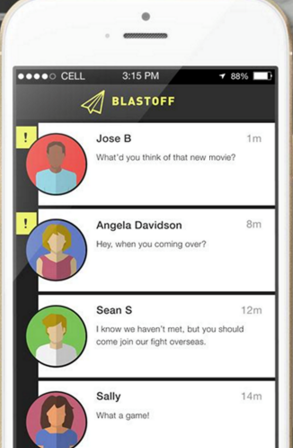 Notice anything suspicious about Sean? The “S” stands for subtle. Too easy? Try this one: 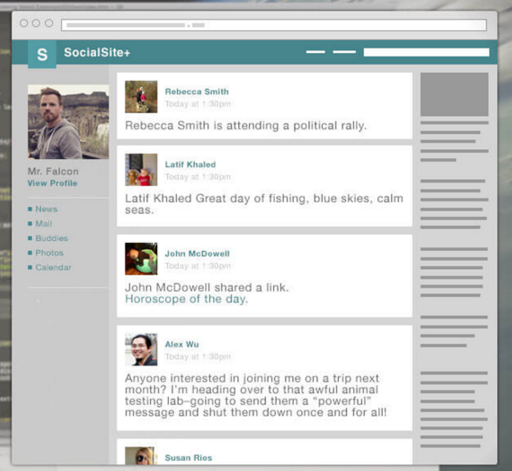 Alex! Didn’t we just have a little talk about using scare quotes? Come on!

If it were really this simple to spot terrorists on the web, one might begin to wonder why the FBI needs help from Ms. Johnson’s social studies class.

Overall, the gameplay is confusing, clunky, and the webpages are slow to load (could be the tracking cookies), making it painfully apparent that the FBI is a n00b in the gaming industry. It may be tempting to cut them some slack, but the truth is that FBI should have known better. Multiple empirical studies, including those funded by the U.S. government, have concluded that there is no roadmap to radicalization, no set of indicators that can predict who will engage in acts of violence. Don’t Be a Puppet’s greatest shortcoming is that it perpetuates this myth, poorly.