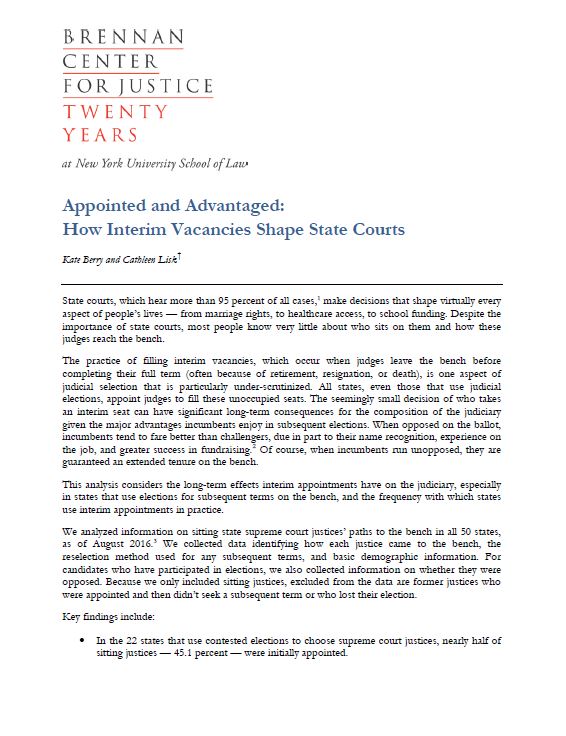 State courts, which hear more than 95 percent of all cases, make decisions that shape virtually every aspect of people’s lives –– from marriage rights, to healthcare access, to school funding. Despite the importance of state courts, most people know very little about who sits on them and how these judges reach the bench.

The practice of filling interim vacancies, which occur when judges leave the bench before completing their full term (often because of retirement, resignation, or death), is one aspect of judicial selection that is particularly under-scrutinized. All states, even those that use judicial elections, appoint judges to fill these unoccupied seats. The seemingly small decision of who takes an interim seat can have significant long-term consequences for the composition of the judiciary given the major advantages incumbents enjoy in subsequent elections. When opposed on the ballot, incumbents tend to fare better than challengers, due in part to their name recognition, experience on the job, and greater success in fundraising. Of course, when incumbents run unopposed, they are guaranteed an extended tenure on the bench.

We analyzed information on sitting state supreme court justices’ paths to the bench in all 50 states, as of August 2016. We collected data identifying how each justice came to the bench, the reselection method used for any subsequent terms, and basic demographic information. For candidates who have participated in elections, we also collected information on whether they were opposed. Because we only included sitting justices, excluded from the data are former justices who were appointed and then didn’t seek a subsequent term or who lost their election.

Previous studies have examined interim selection on state supreme courts, most recently looking at data from contested election states from 1964–2004. Since 2000, however, the landscape of judicial selection has changed dramatically. The process has become more politicized and elections, when they occur, are more expensive. Updated data makes it possible to assess the pathways to the bench in this new electoral environment. This analysis also extends beyond past studies by including data on the reselection pathways for interim appointees, illustrating the long-term consequences interim appointments can have.

The data reveals a disconnect in many states between the formal system of judicial selection and practice. If a state chooses to elect judges in order to forward certain goals, such as public accountability or democratic input, the regular use of interim appointments raises questions about whether its system is, in fact, serving these purposes.

Additionally, the data reveals how crucial appointments are to nearly all states’ selection systems. States committed to selecting a high-quality and diverse bench should therefore focus on structuring their interim selection process to meet these goals.