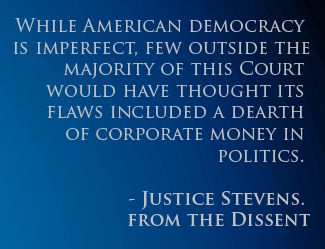 On January 21, 2010, the U.S. Supreme Court issued its ruling in Citizens United v. Federal Election Commission. In a 5–4 opinion written by Justice Kennedy, the Court broadly held that:

(1) no distinction can be drawn between the First Amendment rights of individuals and corporations in the electoral context, and that
(2) “independent expenditures, including those made by corporations, do not give rise to corruption or the appearance of corruption.”  Id. at 42.

Justice Kennedy found that the Government has

“muffle[d] the voices that best represent the most significant segments of the economy.’ And ’the electorate [has been] deprived of information, knowledge and opinion vital to its function.”  (38)

“Essentially, five Justices were unhappy with the limited nature of the case before us, so they changed the case to give themselves an opportunity to change the law.”  (6)

“The Framers thus took it as a given that corporations could be comprehensively regulated in the service of the public welfare. Unlike our colleagues, they had little trouble distinguishing corporations from human beings, and when they constitutionalized the right to free speech in the First Amendment, it was the free speech of individual Americans that they had in mind.” (37)

“At bottom, the Court’s opinion is thus a rejection of the common sense of the American people, who have recognized a need to prevent corporations from undermining self government since the founding, and who have fought against the distinctive corrupting potential of corporate electioneering since the days of Theodore Roosevelt.  It is a strange time to repudiate that common sense. While American democracy is imperfect, few outside the majority of this Court would have thought its flaws included a dearth of corporate money in politics.” (90)

On July 31, 2009, the Brennan Center for Justice – serving as counsel for itself, the Center for Independent Media, blogger Zack Exley, the Editorial Board of political blog Calitics.com, Laura McGann, editor of the Washington Independent, and New York technology and art center Eyebeam – filed a supplemental amicus curiae brief in Citizens United v. FEC.  The brief urged the Supreme Court to preserve landmark precedents that support limits on corporate spending in elections.  Both institutions and individuals who use new technologies to comment on federal elections joined the brief in an effort to address concerns raised by those seeking to overturn the law regarding the impact that campaign finance rules have on journalists, bloggers and other non-traditional media.

Brennan Center Legal Director Burt Neuborne, with four former officials from the American Civil Liberties Union, also submitted a brief (here) that, along with the Brennan Center brief, was noted in the 8/29/2009 New York Times article covering the case.

Background on the Case

In the lead-up to the 2008 presidential election, Citizens United, a non-profit corporation, produced a 90-minute documentary entitled Hillary: The Movie. The film criticized Hillary Clinton at a time when she was the top contender in the Presidential Democratic primary. Citizens United intended to show the film by purchasing airtime to run the video using video-on-demand technology.

Section 203 of the 2002 Bipartisan Campaign Reform Act (popularly known as “McCain-Feingold”) prohibits corporations from using their general treasury funds to fund “electioneering communications” in the 30 days before a primary and the 60 days before a general election. “Electioneering communications” are defined as broadcast advertisements that clearly identify a candidate for federal office and target a significant portion of the relevant electorate.  Citizens United filed an as-applied challenge against Section 203 seeking declaratory and injunctive relief holding that Hillary: The Movie could not be constitutionally classified as an electioneering communication.

On June 29, 2009, rather than issuing a decision in the case, the Supreme Court ordered additional argument and directed parties to file supplemental briefs addressing the question of whether, to resolve this case, it is necessary to overturn either or both Austin v. Michigan Chamber of Commerce, 494 U.S. 652 (1990), which upheld a regulation on corporate treasury fund spending in Michigan state elections, and the part of McConnell v. Federal Election Commission (FEC), 540 U.S. 93 (2003), which upheld the “electioneering communications” section of BCRA, 2 U.S.C. § 441b.

Case History of Citizens United in the U.S. Supreme Court

For an exhaustive database of court filings at both the appellate and district levels, including access to the 40 other supplemental amici briefs, please visit the Federal Election Commission’s Citizens United webpage.