Since 2008, the United States has begun to slowly reduce its prison population.

Last month, the Bureau of Justice Statistics released its yearly data on correctional populations, and it had some relatively uplifting news. The decline in our prison population has continued, and may even have accelerated.

In 2015, the prison population fell by a little over 2 percent, with similar decreases in the jail, probation and parole populations. In fact, 2015 marked the largest drop in the incarceration rate in over 45 years.

This is real progress. The first graph shows that the imprisonment rate has fallen to its lowest point in 15 years. 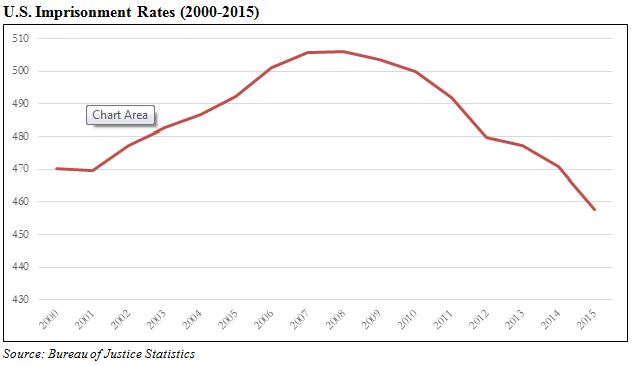 But the second graph, below, shows that we still have a long way to go. These recent gains bring the imprisonment rate down to around 2000 levels (now at 458 per 100,000 people), but that’s still more than 3 times as high as it was in 1980 (138 per 100,000). The recent decline is a step in the right direction, but not substantial enough to truly end mass incarceration. 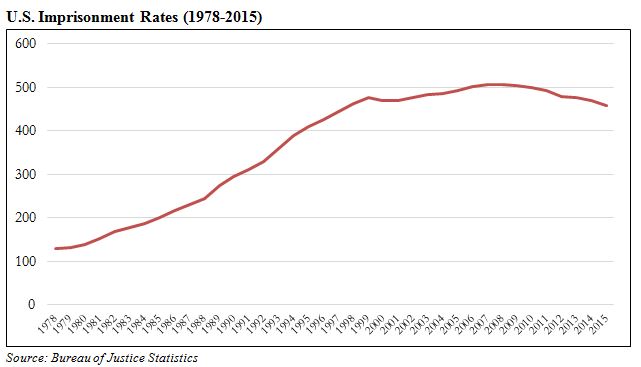 The prison population remains far out of line with both history and other wealthy democracies. The United States has less than 5 percent of the world’s population but nearly 25 percent of its prisoners. Other countries — and many individual states — have found ways to lower crime rates while spending much less on their criminal justice systems and imprisoning far fewer people.

But even with the recent drops, 1 in every 37 adults remains under some form of correctional supervision at any given point. The average American Facebook user should expect about 10 of their friends to be in prison, jail, parole or probation at any given time.

If that does not seem to align with your own Facebook account, that may be because the problem of mass incarceration isn’t experienced evenly. African American imprisonment rates remain almost six times as high as white imprisonment rates, and general involvement with the system is marked by even greater disparities.

So, there is much work left to be done. While the incarceration rate fell by just under 3 percent last year, continuing this trend will be exceptionally difficult. And even at this pace, the United States would not reach the level of incarceration it had in 1985 until 2040. However, if the country can stay the course, mass incarceration can be undone, however slowly. A possible path forward? Officials could take the recommendations of a recent Brennan Center report, which finds that 39 percent of the prison population is unnecessarily incarcerated. Recommendations include refraining from using imprisonment for lower-level crimes, and ensuring prison sentences for serious and violent crimes are proportional to the crimes committed.

The United States just had the largest drop in the incarceration rate in decades. But to bring our numbers in line with comparable democracies (and back to where they were before the surge in the late 1980s and 1990s), we will need to repeat it 25 years in a row.