In an election year, it is not remarkable to hear politicians promising to keep Americans safe (again). What is remarkable, however, is that such a statement would resonate with Americans at a time when crime rates hover near all-time lows.

It should be no secret that, nationally, crime rates have fallen dramatically over the past quarter century. In fact, most Americans have not lived through a period of time safer than what they experienced during the second term of the Obama presidency. Data compiled annually by the FBI calculating the number of crimes committed shows a clear and remarkably consistent trend. From 1992 through 2014 (the most recent year for which complete FBI data is available) the violent crime rate decreased 52 percent and the property crime rate fell 47 percent. The combined crime rate has decreased, year over year, in 22 out of the past 23 years tracked by the FBI.

Rates of Property Crimes and Violent Crimes in the United States, 1992–2014 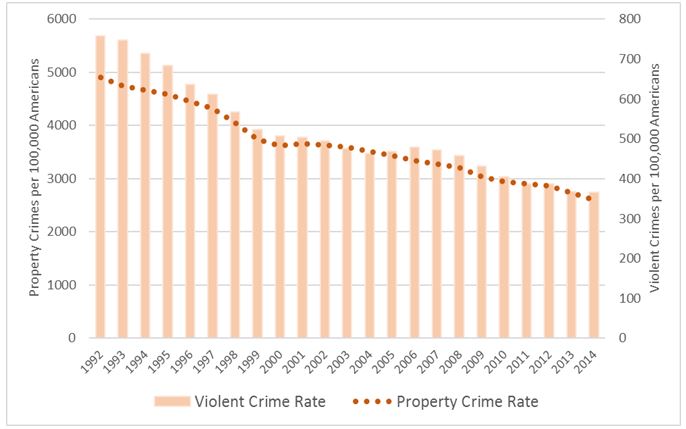 So why are national leaders promising to fix a problem (skyrocketing crime rates) that hasn’t really existed for more than two decades? The answer may be that many Americans never got that message.

Each year Gallup asks a representative sample of Americans “is there more crime in the U.S. than there was a year ago, or less?” These poll have consistently found a plurality of respondents (70 percent in 2015) who say there is more crime. In each year polled from 2002 thru 2014 more than half of those questioned have responded that there was more crime in America than there was one year prior – despite the fact that we know the total number of crimes per capita decreased in all of those years and even the total number of crimes fell in all but one of those years (2003, when they increased by less than one-tenth of one percent).

Percentage of Americans Who Believe There is More Crime in the U.S. Than There Was a Year Ago 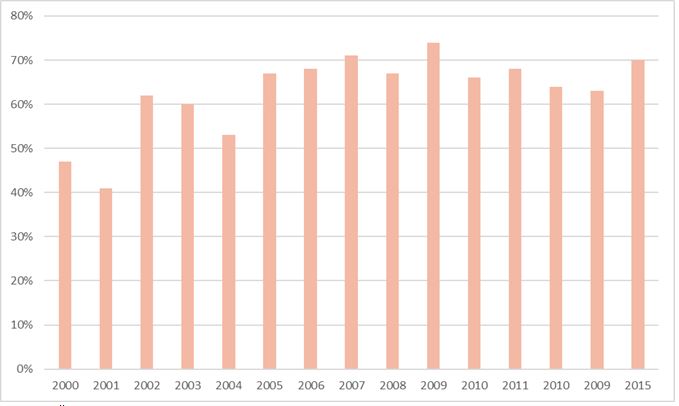 Where is the disconnect? How can Americans so consistently over-estimate the amount of crime happening around them? Answers to these questions remain elusive, but a clue may come from Americans’ responses to another question asked by the Gallup pollsters: “Is there more crime in your area than there was a year ago, or less?”

Surprisingly, this prompt elicits a “more” response from 20 percent fewer respondents, on average, than the question about national crime levels. For a non-negligible group of Americans, it appears they are confident crime is rising in the rest of America, just not in their community. And while it is easy to see why the 46 percent of people who believed there was more crime in their area might also believe crime was on the rise elsewhere, it is more difficult to understand how nearly a quarter of those who offered opinions in 2015 didn’t see crime levels ticking up in their area but still (incorrectly) assumed it was a mounting problem for the nation as a whole.

Is There More Crime in Your Area Than There Was a Year Ago, or Less? 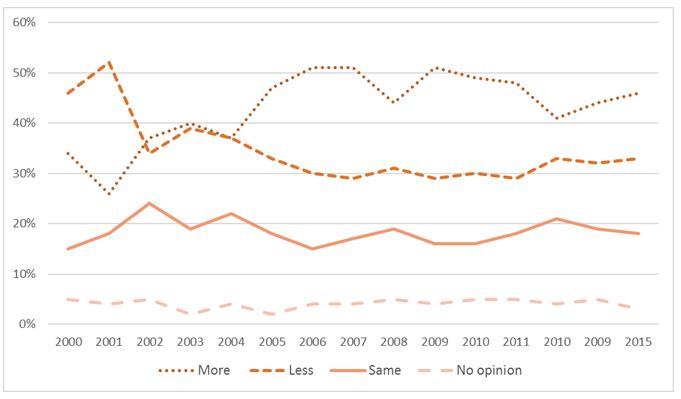 One of the chief culprits fingered as contributing to Americans’ unfounded beliefs about changing crime levels is the media. “The media is a powerful force that can cloud perception,” writes MIT Professor Marc Gerstein in his book Flirting with Disaster, “…the news media and social gossip tend to promote stories that are unusual or emotionally intense.” Many social scientists agree that viewing newscasts that frequently include stories of horrific crimes can influence individuals’ perceptions of the rate at which these events are occurring across the nation as a whole. This would be fine if the number of news stories about crime closely tracked the actual amount of crime occurring, but there is good data showing that actual crime levels have little to do with how prominently the topic is featured in the popular press.

The Project for Excellence in Journalism tracked and compiled a News Coverage Index made up of news stories from thousands of outlets nationwide including cable news channels, network television stations, newspapers, online sources and radio programs. The table below compares the portion of stories that were categorized as being about crime in the years 2007–2012.  It indicates that the portion of news stories related to crime shared little correlation with crime statistics collected by the FBI. For instance, news stories about crime increased more than 30% in 2012, despite the fact that violent crime rose by less than 1% that year and the total crime rate (including property crimes) actually fell.

The public’s misperception of crime levels is particularly dangerous because public opinion strongly influences public policy. Offering facts that contradict voters’ opinions is an uphill climb, especially if another candidate is willing to pander to constituents’ suspect beliefs in return for political support. This historical truth can explain why an entire day of the Republican National Convention was themed Make America Safe Again at a time when, for most of those in attendance, crime rates in their hometowns were near the lowest point they have been in more than half a century.

As former U.S. House Speaker Newt Gingrich put it while speaking at the convention, “The average American, I would bet you this morning, does not think crime is down, does not think they are safer.” And he is exactly right: most Americans have it wrong when it comes to crime levels. Facts notwithstanding, crime reduction and public safety appears to be as good a platform to run on now as it has ever been. Responding to an interviewer who lamented that “[the people] may feel it, but the facts don’t support it” former Speaker Gingrich replied “As a political candidate, I will go with how people feel and I will let you go with the theoreticians.” Regrettably, that may not be such a bad strategy.