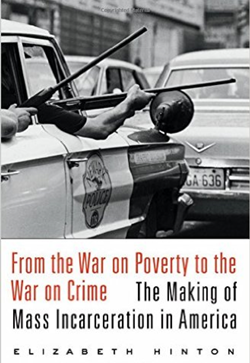 This review first appeared in The National Book Review.

The statistics are stunning. This very second, more than 2.2 million people sit behind bars in America. To put this into perspective, the United States is home to the largest prison system on the planet.  But corrections today encompasses more than just metal bars. An estimated 6,851,000 people are under some sort of correctional supervision, such as probation or electronic monitoring. If you do the math, it’s about one in 36 adults.  The racial disparities are striking: according to the Sentencing Project, one in every 10 African-American men in his thirties is in prison or jail on any given day.

Elizabeth Hinton, professor of history and African American studies at Harvard University, examines how mass incarceration happened in America in her new book, appropriately titled From the War on Poverty to the War on Crime: The Making of Mass Incarceration in America. Hinton’s approach is novel. Most criminal justice experts cite President Ronald Reagan’s War on Crime as the driver for today’s current levels of incarceration.  Hinton argues that President Lyndon Johnson’s Great Society policies— which aimed at improving conditions for the most impoverished Americans — laid the foundation for mass incarceration and its attendant racial injustices.  Reagan’s policies, she says, were merely “the fulfillment of federal crime control priorities that stemmed initially from one of the most idealistic enterprises in American history during the era of civil rights.”

This may be a surprising claim, but it is not a unique one: there are a growing number of academics today who are blaming liberals for creating mass incarceration and for the sizable racial disparities that exist in the justice system.  Naomi Murakawa, political scientist and associate professor of African American studies at Princeton, made this argument in her recent book The First Civil Right: How Liberals Built Prison America. Murakawa points to federal legislation written by liberals to reduce discretion in sentencing and parole.  The liberals’ goal was to avoid racially disparate punishment — judges, they argued, generally used their discretion in ways that hurt racial minorities.  Time has shown, however, that reducing judicial discretion only resulted in more racial disparities, as African-Americans ended up spending more time in prison as a result.

University of Pennsylvania professor of political science Marie Gottschalk, made a similar case in her 2015 book Caught: The Prison State and the Lockdown of American Politics. Gottshalk contends that African-American advocacy groups have not always led the way in criminal justice reform and have in fact, at various points in history, supported measures that created more punitive criminal justice policies that have harmed African-Americans. She notes that the majority of the Congressional Black Caucus supported the Anti-Drug Abuse Act of 1986, a law that notoriously, and controversially, punished crack cocaine use (a crime African-Americans are more likely to be convicted of) 100 times more harshly than powder cocaine use (which skews more white).

Building on this theme, Hinton’s well-researched book is filled with historical anecdotes painting a colorful picture of the nation’s persistent struggle with crime since President Johnson coined the phrase “War on Crime” more than fifty years ago.  A year before President Johnson declared this war, Congress passed his Economic Opportunity Act of 1964, which Hinton calls “the most ambitious social welfare program in the history of the United States."  The Economic Opportunity Act, which invested almost $1 billion in fighting poverty, would prove to be one of the most important parts of President Johnson’s War on Poverty, and his larger Great Society initiative, in which billions of dollars were spent on dozens of antipoverty programs. Hinton, however, criticizes President Johnson for not spending more money on job creation measures and revamping public schools in poor, urban areas. What came next, in her opinion, set the stage for decades of punitive measures that ultimately resulted in today’s phenomenon of mass incarceration.

Specifically, Hinton points to the so-called “long, hot summers” of 1964 and 1965, which were marked by urban uprisings across the country, from Harlem to Los Angeles, protesting how white police officers treated African-Americans.  In the summer of 1965, a hostile encounter between police officers and an African-American family set off six days of protests in South Central Los Angeles, which would be known as the Watts Riot, resulting in the deaths of 34 people, almost 4,000 arrests, and more than $40 million in property damage.

The Watts riot, in particular, called President Johnson’s antipoverty record into question. Hinton maintains that the Johnson Administration and Congress “championed a law enforcement strategy that merged the War on Crime with the War on Poverty, forging a network of social service and surveillance programs that first emerged in the New Frontier and under the umbrella of the Great Society.” This punitive shift and fundamental change in the funding structure for domestic social programs to include more money for a law enforcement role in social welfare programs, she argues, paved the for President Richard Nixon to vastly expand the nation’s correctional system, and prevented President Jimmy Carter from dismantling the enormous federal crime control programs that he inherited. By the time President Ronald Reagan took office, he doubled the already historically high federal funding for domestic crime and drug enforcement programs.

From the War on Poverty to the War on Crime is smart, engaging, and well-argued.  Its one flaw, however, is that it does not adequately recognize that many of the policies it criticizes, with 50 years of hindsight, were well-intentioned at the time – and, their implications for criminal justice aside, did a great deal of good. It is not until the very end of the book – pages 335 and 340 to be exact – that Hinton throws some morsels of recognition their way, conceding that these policies may have been “a product of their time” and that there are “questions of intent”. But the concession is a grudging one – Hinton writes that these questions of intent “are only relevant to a certain extent” as the real issue is to “uncover the series of decisions that made contemporary mass incarceration possible.”

The last 50 years have brought valuable research about crime, evidence-based programs, and how to improve the lives many Americans through education, community support, and mental health and drug treatment services. To give short shrift to the well-meaning efforts of so many of the nation’s academics, researchers, and policymakers is an unfortunate blind spot in an otherwise well-researched and provocative analysis of the causes of our mass incarceration crisis.