Next Tues­day, New York­ers will take part in a pres­id­en­tial primary that’s getting an unusual amount of atten­tion, both from candid­ates and media. 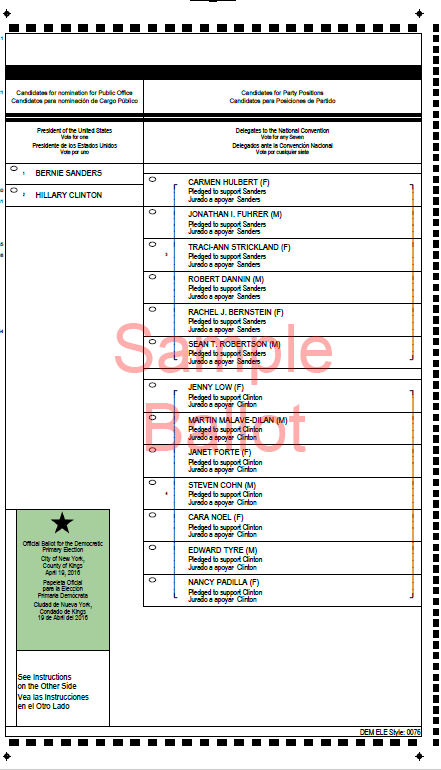 If you read noth­ing else, know this: the winner of the primary will be determ­ined by the votes in the left column, for the candid­ates them­selves. The column on the right is to help determ­ine which deleg­ates will attend the party conven­tion.

At first glance, it’s not neces­sar­ily clear what voting for a candid­ate versus for a deleg­ate accom­plishes — and unfor­tu­nately, the ballot’s instruc­tions do not provide much guid­ance.

Let’s break down how it works: the left column is easy enough — you vote for the pres­id­en­tial candid­ate of your choice. The outcome of the Demo­cratic primary will be determ­ined by this column.

The right side is where it gets tricky. Voters are asked to choose who, among a candid­ates pledged deleg­ates, will attend the party’s conven­tion. Voters may select up to a certain number of deleg­ates in their district (in the above sample, a voter may select up to seven).

Setting aside the merits of such a system, it is presen­ted on the above ballot with little explan­a­tion and laid out in an unclear way. This is not a new prob­lem, but rather the latest in a series of unclear New York ballots, like those with candid­ates from differ­ent parties in the same column, which in the past have led to lost votes.

But that won’t be happen in time for Tues­day’s primary — so Demo­cratic voters should take note before head­ing to the polls, and lawmakers across the polit­ical spec­trum should keep this and other examples in mind when think­ing about reform­ing New York’s elec­tions.

And again, on the Demo­cratic ballot, it’s the left column – the one with the candid­ates them­selves – that will determ­ine the outcome of that party’s primary.