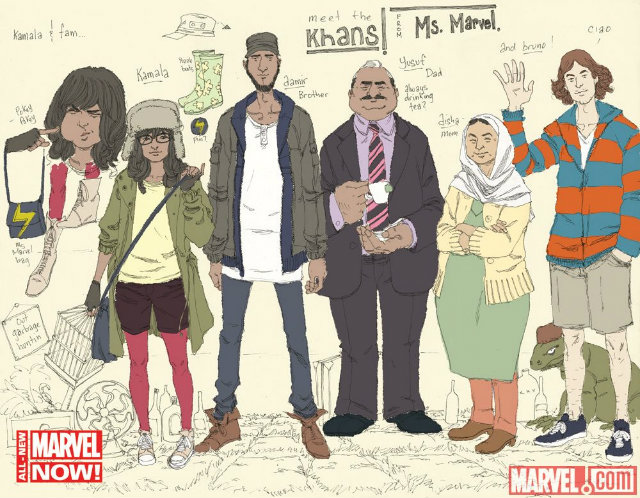 When Marvel Comics announced the debut of its latest superhero — a 16-year-old Pakistani-American Muslim from Jersey City, N.J. — it was correctly seen as a positive development. Created and written by two American Muslim women, Kamala Khan (aka Ms. Marvel) holds promise.

But while Khan is a comic book character, she should not become a caricature.

“Her brother is extremely conservative,” the editor, Sana Amanat, told The New York Times. “Her mom is paranoid that she’s going to touch a boy and get pregnant. Her father wants her to concentrate on her studies and become a doctor.”

American literature is replete with tales of assimilation, from “My Antonia” to “The Joy Luck Club.” The overprotective mother and the demanding father are staples of the genre. But with Khan, there is an additional twist: The “conservative” brother.

When talking about Muslims, “conservative” is often code for someone who embraces a fundamentalist understanding of Islam, which is viewed as just one step short of becoming a terrorist.

In his forthcoming book, “The Muslims Are Coming!” Arun Kundnani identifies two narratives about Islam that have fueled the “war on terror” and its cousin, Islamophobia. Conservatives believe Islam’s problem is that it has yet to reconcile itself with modernity. Liberals believe Islam has been hijacked by ideologues to produce a new, totalitarian ideology, “Islamism.” The idea of a religiously conservative but tolerant Muslim doesn’t fit within either of these paradigms.

We don’t fully know how Khan’s brother will behave, but the creative types at Marvel should think hard about whether they are perpetuating stereotypes or accurately reflecting the complexity of a modern American Muslim family.

Nor should courageous Muslim characters — both real and imagined — be a reason to let ourselves and our leaders off the hook for the pervasive discrimination ordinary Muslims face. It is ironic that Khan’s superpower is that she is a “shape shifter” who can transform her body into any size or shape. Islamophobia, too, takes different shapes.

A recent Oklahoma constitutional amendment banning Shariah (a nebulous body of Islamic law and traditions) was struck down because it discriminated against Muslims. Even so, its proponents have backed similar measures in more than 30 states, and they’ve won in seven states. While not all of these laws overtly target Muslims, their advocates sure do. Florida state Sen. Alan Hays likened Shariah to a “dreadful disease” against which Americans should be vaccinated.

When Gov. Chris Christie nominated a distinguished Muslim lawyer to the New Jersey Superior Court two years ago, there were questions about whether the nominee would apply Shariah, not state and U.S. laws. The ever-blunt Christie, thankfully, dismissed the criticism: “This ‘Shariah law’ business is crap. It’s just crazy.”

Last year, members of Congress, led by Rep. Michele Bachmann, R.-Minn., charged that Hilary Clinton’s long-time Muslim aide, Huma Abedin, was part of an Islamic conspiracy to influence U.S. foreign policy. Prominent Washingtonians took up Abedin’s defense, including Sen. John McCain, R.-Ariz., who declared that the attacks had “no logic, no basis and no merit.”

Although most American Muslims cannot rely on high-profile defenders like Christie or McCain, they surely need government protection. Muslims, who constitute 2 percent of the American population, make up a whopping one-quarter of the docket of the Equal Employment Opportunity Commission. According to the latest data from the FBI, hate crimes against Muslims jumped 50 percent from 2008 to 2011. The ability to gather together to pray is one of the fundamental pillars of religious liberty, but the Department of Justice has found that Muslims face major obstacles when they try to build mosques.

Government agencies have been assiduous in documenting and fighting these types of discrimination. But such support quickly falls away when Muslim communities complain that they have been spied upon because of their faith. Faced with documents that raise extremely troubling questions about how the New York City Police Department monitored Muslims, the city’s political leaders, by and large, have been unmoved. The Justice Department may come to the aid of communities seeking to build mosques, but it has ducked repeated calls to investigate the NYPD’s infiltration of these same institutions. The FBI investigates hate crimes against Muslims, but it continues to target the religiously observant among them as potential terrorists.

Against this, the arrival of Kamala Khan is cause for celebration. She may make a few people think that Muslims can be heroes as well as villains. But vanquishing anti-Muslim prejudice will take a more sustained and energetic effort by Khan’s human counterparts.