Whenever the FBI releases its Uniform Crime Reports (UCR), keen attention is paid to any change in violent crime (such as murder), and property crime (such as burglary).

Less attention is paid to another figure reported in the UCR: the “clearance” rate for crimes. In the simplest terms, a crime is considered “cleared” when it has been solved. Evaluating the rate at which police “clear” crimes is often used as a measure of their effectiveness.

As the chart below shows, clearance rates vary widely by crime. A closer look reveals they vary by other factors as well. 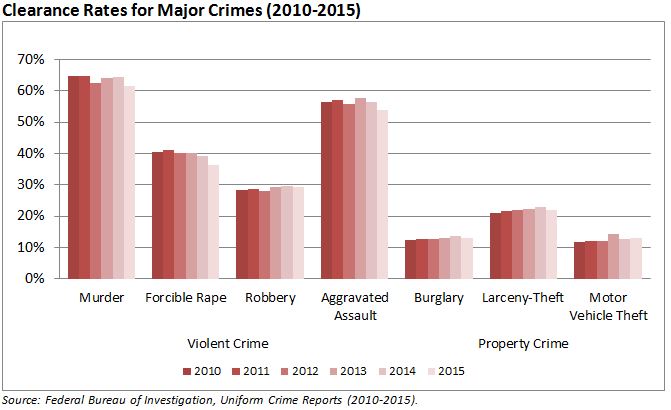 In  2015, for example, officers responded to 14,392 homicides in the United States and reported “clearing” 61.5% over the same period. That means police identified the suspect in about 8,851 murders — similar to previous years, and relatively high compared to other crimes.

Why is the clearance rate for murders so high compared to, say, burglaries? It may be that police departments devote significant resources to solving crimes involving violence and loss of life (note that the clearance rate for aggravated assault is also relatively high). Or perhaps murders are easier to solve than property crimes or more likely to have witnesses.

Despite the focus on solving crimes where an individual perishes, some murders still manage to end up unsolved. What may be surprising is that there are significant disparities even within “un-cleared” homicides.

For one, according to the FBI’s expanded homicide data from 2014, police were not able to identify key traits of the offender, or even describe the relationship between the victim and the killer, in 40 percent of homicides where the victim was black. That’s nearly double the rate for white victims, which stands at around 22 percent.

Let’s take a closer look at the data. Black victims are also more likely to be killed by a firearm than all other types of weapons combined. According to FBI data, in 2014, 78 percent of black homicide victims were killed by guns, compared to 57 percent of white victims. 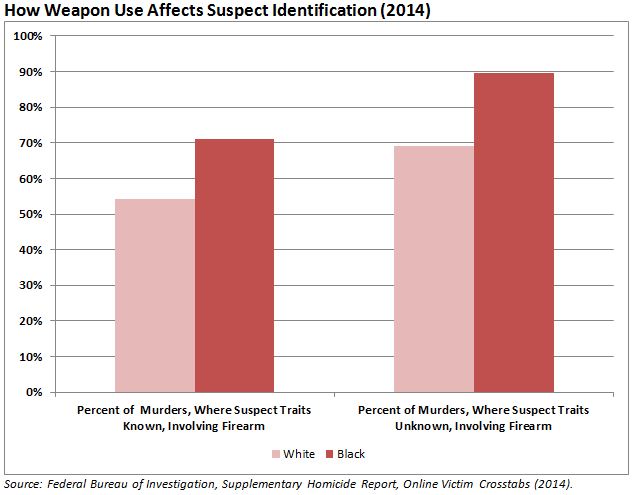 Could this have some impact on the clearance rate disparity? Perhaps. Firearms are the most common means of committing a homicide, serving as the murder weapon for around 68 percent of murders involving black or white victims in 2014. As it turns out, gun homicides are also more difficult to solve. Regardless of race, gun homicides represent a larger share of the crimes where a perpetrator is not identified.

It’s clear that the type of murder weapon employed is an important variable to account for and could partially explain why homicides of black victims are solved less frequently than those of white victims. Of course, there are likely other explanations for the apparent racial disparity in clearance rates, too — reasons that call for more in-depth analysis.

But if the data are any guide, focusing on curbing gun violence could significantly increase the number of killers brought to justice, while decreasing the apparent disparity in justice received by black and white homicide victims.