The United States has the highest incarceration rate in the world. We have 5 percent of the world’s population, yet 25 percent of its prisoners. There are over 2 million people in prison and jail, and nearly 2 million children with a parent incarcerated. Of them, 400,000 are age four or younger. One in three black males born today will go to prison at some point in his life. There are over 500 percent more women in prison today than in 1980. Our incarceration rate is 800 percent higher than Germany’s and 1300 percent higher than Japan’s.
What do you call something like that?
Undeniably, today’s term of art is “mass incarceration.” The phrase now seems ubiquitous, and is in use by The New York Times, The Washington Post, The Wall Street Journal, The Economist, CNN, Al Jazeera, and MSNBC; Harvard Law School, Columbia Law School, The University of Chicago Law School, NYU Law, and myriad other academics; the Brookings Institution, the Sentencing Project, the Urban Institute, the AFL-CIO, and countless others, including the Brennan Center.
The problems embodied by the phrase “mass incarceration” are now the bête noire of criminal justice reform advocates. The term means much to many on both the left and right of the political spectrum: a failure of social justice, a violation of human rights, an ineffective crime-control policy, an egregious waste of taxpayer money.
The term’s use, however, has undergone as dramatic a change as incarceration itself. In fact, it barely existed in its current sense even 20 years ago. Here is the relative frequency of usage of the phrase “mass incarceration” in the U.S. in books published in the last hundred years (a corpus of some 150 billion words), according to Google Books:

Certain early uses of the term are almost tragically quaint. One of the earliest American citations I can find, from a speech to the Meeting of the National Probation Association in June 1938, warns against the difficulties of rehabilitation amid the “mass incarceration of hundreds or even thousands of inmates.” We’ve since reserved the term for something three or four orders of magnitude more extreme.

Its rise to broad use in more immediate history has been remarkable as well. Here are the instances of the phrase “mass incarceration” in newspapers over the last 35 years, compiled using a LexisNexis search: 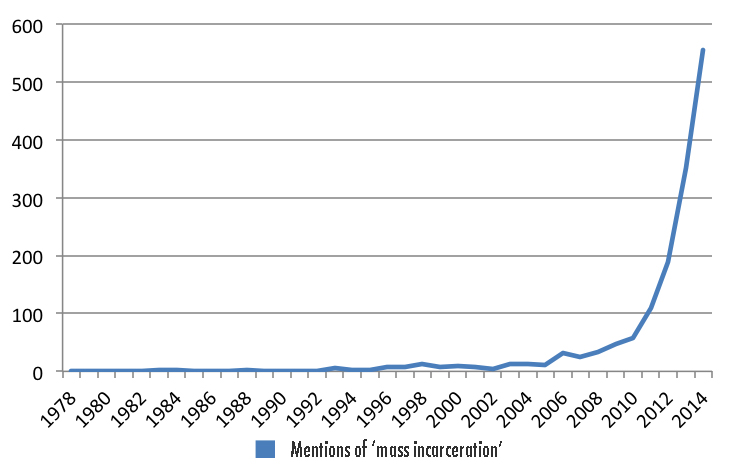 Again, the term was not often used until about ten years ago, and effectively didn’t exist in its current sense ten years before that. (The figure I include for 2014 is a projection based on uses thus far.) Its use also has an interesting relationship to the phenomenon itself. Here again are the newspaper mentions, now compared to the actual U.S. incarceration rate in state and federal prisons (per 100,000 population, in red): 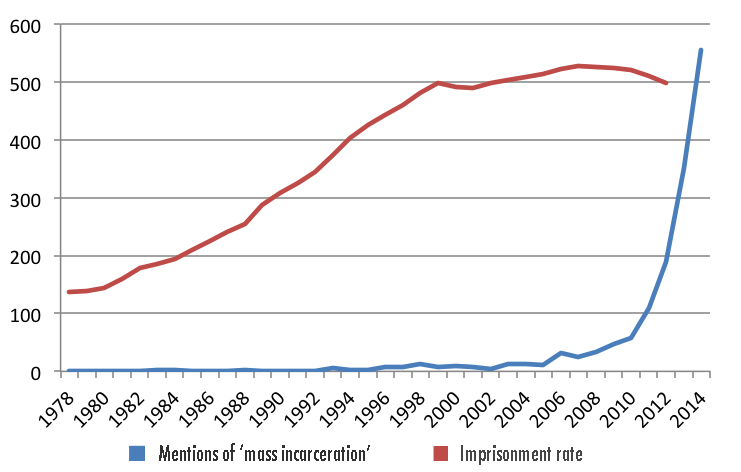 The use of the term (“mass incarceration”) has lagged far behind the use of the policy (mass incarceration). The phrase wasn’t uttered in the press more than ten times in a year before the incarceration rate had already risen to over 235 percent its 1978 level. In the year 2002, with the incarceration rate at over 260 percent its 1978 level, the phrase was used just four times.
But today, even as incarceration rates have largely plateaued, use of the phrase shows no signs of abating. It was used 352 times in 2013, and 278 times already in 2014 (compare that to 12 and 13 times in 2003 and 2004, respectively). The New York Times alone used the phrase 25 times in 2013, and 26 times already in 2014. This phenomenon is as interesting as (but thankfully far less tragic and serious than) the rise in incarceration itself.
So what did we used to call this phenomenon? It’s not entirely clear, and it’s not clear we even had a name for it. In the 1990s, for example, according to Google Books the most commonly used adjectival phrase containing the word incarceration was “shock incarceration,” which seems to be a reference “boot camp” style short prison stints for offenders. For the word imprisonment, the only phrase with a meaningful number of mentions was “false imprisonment.”

More recently, several other terms have also been used to describe the unprecedented levels of incarceration in America. These include “mass imprisonment,” “overcriminalization,” and “overincarceration.” The term “prison industrial complex” also became far more widely used, but its rise as a phrase may have even occurred after that of “mass incarceration.” Here are the frequencies of use of a few of the candidate phrases:

So who or what was responsible for the rise of mass incarceration (the phrase)? There are a few candidates. An obvious one might be Michelle Alexander’s book, The New Jim Crow: Mass Incarceration in the Age of Colorblindness. While that book likely further cemented the term’s use, it can’t have been largely responsible, as it was first published in 2010. A couple of earlier books mention the term, and may stake a good claim to promulgation, including Invisible Punishment (2003, edited by Meda Chesney-Lind and Marc Mauer) and No Equal Justice (1999, David Cole). The latter was responsible for the very first New York Times use of the term in its current sense, in the paper’s book review. (Interestingly, the three books mentioned here were published by The New Press.)

David Garland has been given explicit credit for coining the kindred phrase “mass imprisonment” in a 2001 book. However, Garland acknowledges the contributors to his book (which he edited) for their use of the phrase. Plus, as one can see in the picture above, “mass imprisonment” was used, and used increasingly, well before 2001.

It’s likely no one citation is responsible for the dramatic rise of “mass incarceration.” Rather, a snowballing list of mentions by researchers and advocates, followed some years later by the news media, seem to have cemented it as the term of art. The media’s use of “mass incarceration” has not only made the term widely popular, but has brought increasing public attention to the underlying substantive problem. One reason mass incarceration may have been picked up so quickly by the media is its implication of the enormity of the problem, implying a need and urgency to act.

The phrase, however, is not without its critics. The work of authors such as Michelle Alexander have led some to argue that the term mass incarceration implies that our crime policies were enacted with a deliberate racial intent. Similarly, Robert Weisberg and Joan Petersilia argue that while “mass incarceration” is in many ways a justifiably dramatic term, it may also be melodramatic, “implying some things about American criminal justice that are not entirely true.” On the other hand, Loïc Wacquant argues that “mass incarceration” fails to highlight the outsize effect of the justice system on African Americans and the poor, and instead advocates for the phrase “hyperincarceration.” But, for better or worse, the media’s popularizing of the term may have divorced it from earlier racial connotations. Mass incarceration as used in public discourse is starting to refer simply to the massive size of our incarcerated population.

Critiques notwithstanding, has the seemingly universal adoption of this current phrase enabled discussion and, maybe more importantly, will it effect any broad policy changes?

Importantly, the current term mass incarceration is, if not coopted, then at least recycled. A simple comparison to the now ubiquitous phrase “global warming” helps illustrate that point. Here are both of the terms’ book mentions in the last hundred years:

Both begin to increase in frequency in the mid- to late-eighties, and “global warming” may have even had a more dramatic rise. However, the term “global warming” was never used before 1980. The term “mass incarceration,” while far rarer than today, was used occasionally.

It was used, though, to mean something quite different.

Following the attack on Pearl Harbor in 1941, the U.S. ordered the internment of Japanese Americans on the west coast. Over 100,000 people were incarcerated as a result. Nearly all uses of the phrase “mass incarceration” before 1980 are in reference to this. For example, see this early use in a 1962 lecture, or this from a 1971 education journal.

The history of Japanese internment came to an end with President Ford declaring it a “national mistake” in 1976, and President Reagan signing the Civil Liberties Act of 1988, which allowed for reparations for those interned.

It remains to be seen how the history of our current mass incarceration epidemic will end.

As far as I can tell, the very first appearance of the phrase “mass incarceration” is in Karl Marx’s Eighteenth Brumaire of Louis Bonaparte, published in 1852. (The German is “massenhafte Einkerkerung.” The English translation is from at least 1935, but earlier translations do exist, back to at least 1897.) In this case, the term is invoked to highlight persecution of the French peasantry under Napoleon III.

Coincidentally, this is the same essay where Marx remarks that history repeats itself: “The first time as tragedy, the second time as farce.”
At the very least, the dramatic entrance of “mass incarceration” into American public discourse demonstrates that an increasing number of people are aware of how dire our incarceration crisis has become. If acceptance of a problem’s existence is the first step toward creating public and political will to resolve it, it would seem the United States is at least part of the way there.
Research assistance: Zachery Crowell
(Photo: Thinkstock)
Stay up to date