Newspapers lately have been filled with disturbing headlines about “spikes in crime.” In March, the New York Daily News wrote, “The murder rate in New York City has spiked an alarming 20% in the first two months of the year, prompting NYPD brass to rethink strategy to curb the deadly trend.” The Los Angeles Times reported “LAPD struggles with spike in violent crime, shootings.” Even the BBC asked “Why has the murder rate in some US cities suddenly spiked?”

These headlines, however, conflict with statistical data showing that we are actually enjoying some of the lowest crime rates in more than half a century. Why then do we continue to see headlines that seem to say the exact opposite? Moreover, how is it that most Americans inaccurately believe that crime is on the rise?

Well, when we don’t read past the headlines, it is hard to see the forest for the trees. A closer analysis of crime over time provides a less alarming and more accurate picture of crime trends than the short-term analysis headline writers often rely on.

Crime Trends: Knowing What To Look For

Let’s take a look at murder — a harbinger of crime trends since it is highly-correlated with the other major crimes. Even a cursory study of murder totals over the past two decades shows a clear downward trend in the number of murders committed in America’s three largest cities. A “trend” indicates the general direction something moves towards. The red lines in the graphs below show that the long-term trend is toward fewer homicides in all three cities.

This same trend appears in most major cities across the country.

This does not mean that crime is always decreasing in these cities; in fact you can see areas of all three graphs where crime levels rapidly increase (and rapidly decrease) over short periods of time. These fluctuations are a combination of normal seasonal cycles and random events known technically as ‘noise’. Noise denotes the transient increases and decreases attributable to happen-stance or short-run shocks, but unrelated to the long-run pattern of decreasing murder levels.

Compare New York’s annual murder totals and Chicago’s monthly totals. Both exhibit the same long-term trend: a decreasing number of murders. Also note, however, that the longer time interval used to describe New York’s homicide totals generates a smoother graph that closely tracks the trend line and is almost uniformly decreasing — making it very easy to identify that city’s crime decline. On the other hand, Chicago’s graph exhibits wild fluctuations from season to season (this is known as seasonality). Monthly totals are a great way to display homicide data if you want to understand how solstice patterns impact murder rates, but it also amplifies the cyclical and noise components of Chicago’s homicide totals — making it harder to distinguish the underlying trend. This can lead many neophytes to misinterpret what current data has to say about the amount of crime we should expect in the future. 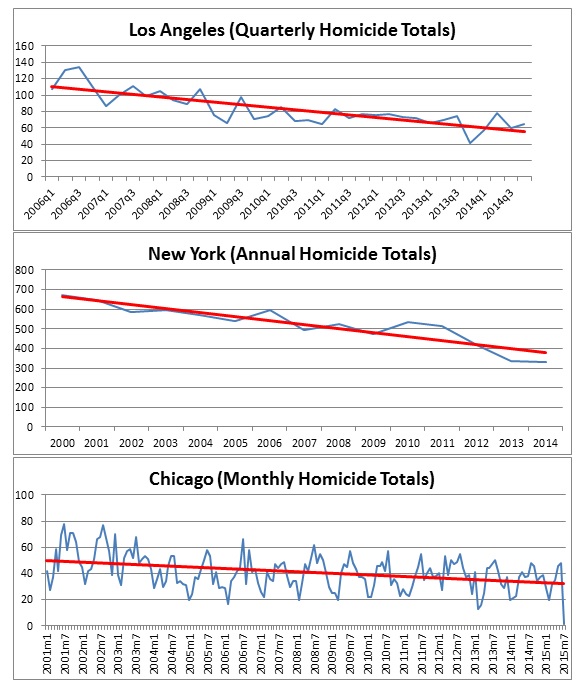 To understand the difference between trends, which you should care about, and noise, which can typically be ignored, consider NBA star LeBron James’ free-throw shooting record. From January through March of the 2014–2015 NBA season, James shot 268 free throws, scoring on 69 percent of those attempts.

How does this relate to crime? The red line above shows that in 14 games over three months, James’ free-throw percentage increased or decreased by more than 20 percent relative to his previous outing.  In multiple instances his shooting acuity fell by half from game to game. In another, it more than doubled. To assume those spikes tell us anything about James’ basketball skills would be foolish — they are just noise.

Similarly, from day to day, month to month, or year to year, crime may rise or fall due to seasonality and noise. Only by observing these changes over a sufficient period of time can we see a trend emerge. The difficulty is figuring out how many observations are necessary to cut through the noise and show us the true trend. In terms of uncovering crime trends, this involves answering two questions:

1)      How frequently should measurements of crime statistics be reported?

2)      Does the current crime level make sense given the data we have observed in the past?

This headline from The New York Times on July 1st: “June Crime in New York City at Lowest Since ‘94” seems encouraging, but it also means that June 1994 was safer than June 2014, and by most measures 2014 marked the nadir of New York crime in the modern era. Was New York in 1994 really the low crime ideal we would like to hold the city up against? Absolutely not — as can be seen in the chart below.

Crime does not occur uniformly across time. In addition to normal cyclical variations that occur daily, weekly, and most visibly seasonally (as referenced using Chicago’s monthly murder totals above) — there is also a random component that may cause a gang war erupt in May rather than June, for example. This is why most criminologists agree that monthly crime totals are the wrong unit of observation to draw broad inference from. Doing so will very often lead to spurious conclusions because such data is highly variable and allows people with a specific agenda to cherry pick the most favorable statistics.

Another set of examples come from stores in the New York Daily News about New York’s murder rate.  The first appeared on March 2, 2015 with the title “Murders up 20% in 2015 in year-to-year comparison, NYPD says”.  An increase of 20 percent seems like a lot, but percentage changes can often be misleading because percentage changes are a relative measure and they are sensitive to magnitude. In the hands of a talented writer, an otherwise unremarkable single digit change in the total number of something can easily become a dramatic double-digit percentage change. In this case the author was referencing the 54 murders that occurred in January and February of this year, an increase of 9 murders since January and February of 2014. If that gap were to persist until the end of the year it would represent much less sensational 2.7% increase compared to 2014.

Another New York Daily News headline in April reads: “Murders in New York City continue to rise; 82 people killed as of Sunday, up 16%”.

NYPD spokesman Stephen Davis— further down the page and in much smaller print than the headline — also made the point that percentage changes can often mask misleading statistics. He first noted that six of the 82 homicides were actually committed months or years before and had just been reclassified this year due to the death of the victim. He went on to say:

The actual increase in homicide incidents occurring this year is five as of midnight [Sunday, April 5th]. An increase or decrease of five incidents, given the overall numbers, is not considered at this point to be evidence of an unusual trend.

Mr. Davis is exactly right, despite repeated warnings from the Daily News, New York does not appear to be experiencing a crime wave. A closer look at the data proves this.

The dots on the graph below are annual homicide totals. These points are much easier to understand when we draw a line that “models” the trend in the data. That line shows that murder totals have tended to fall over time. We can also use this line, as well as how close each dot is to the line, to tell us what we might expect in the future. 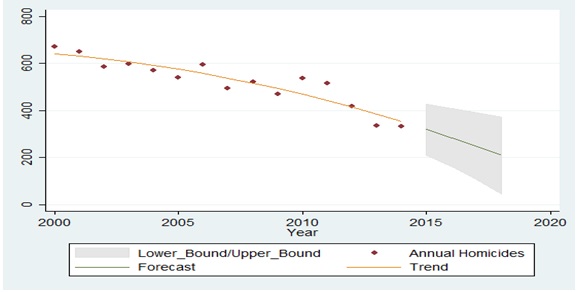 The shaded area in the graph above is a 95 percent prediction interval for future murder counts. It means that if our model is correct, we can be 95 percent certain that the 2015 homicide total in New York City will fall somewhere in the shaded interval. Given that through the July 26 there were fewer than two dozen more murders relative to 2014, Mr. Davis is correct that nothing unusual is afoot. Given what we have observed so far in 2015, it would take a remarkable increase in the average daily murder rate for us to lose confidence in our model’s prediction of generally lower murder totals in the future.

This is not to say murder rates won’t rise this year (relative to last year’s homicide total), after all, even in the midst of the dramatic crime decline New York experienced over the past two decades homicide rates rose year-to-year on four different occasions. Instead this exercise shows that this type of short-run increase is not a significant departure from the established trend of generally decreasing murder totals.

Data shows that there is no nationwide crime wave washing over our cities. And there is no compelling evidence that one is imminent either. New York, like many other cities around the country, is experiencing an historic ebb in most types of crime. So readers beware, don’t take headlines at face value.  Startling headlines need not lead to dire conclusions.