The word is out: Congress is finally moving forward on criminal justice reform. That’s great news. After decades in which Congress piled punishment upon punishment, now there’s a bipartisan consensus – plus bills – to do something about mass incarceration.

But Congress should take the tough step of actually looking at crimes and sentences, and not just the important but far less thorny question of reentry after prison. Otherwise it will be a missed opportunity.

The stakes are high. Mass incarceration has grown in plain sight for decades. The United States has 5% of the world’s population, but 25% of its prison population. Most of that growth has come in states and city systems, but the federal government also adopted imprisonment as a panacea for all criminal justice ills. 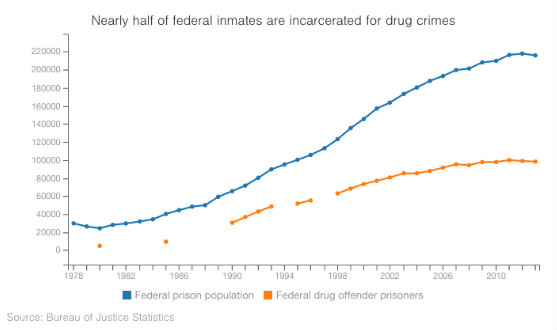 Since 1980, the number of federal inmates increased eightfold – and costs have risen sixfold. Today, nearly half of federal inmates are incarcerated for drug crimes. Meanwhile, the Bureau of Prison (BOP) accounts for nearly a quarter of the Justice Department’s budget, eating up valuable dollars that could go to law enforcement or other priorities. Mass incarceration exacts immense social and economic costs on individuals, families, and communities.

As crime continues to drop while the costs of imprisonment rise, there is a rare bipartisan consensus building across the country, as Republicans and Democrats put forward reforms seeking to shrink the prison population.

California – once known for harsh gimmicks like the “three strikes and you’re out” law – recently passed Proposition 47, which reclassified many petty crimes from felonies to misdemeanors. In 2012, Californians reduced the severity of its three-strikes law. These and other reforms have helped the state’s prison population finally inch below a court-ordered population cap put in place to alleviate overcrowding pressures.

Kentucky passed reforms in 2011 that permitted the early release of nonviolent offenders and introduced risk assessments to connect individuals with treatment. By 2013, the state enjoyed the fourth largest decrease in incarceration nationally.

New Jersey passed legislation in 2010 allowing judges to sidestep mandatory minimum sentences for nonviolent drug offenses. Last fall, the state adopted bail reform to reduce the number of individuals incarcerated prior to sentencing. The state’s prison population has declined by 10% since 2010.

Such changes are sensible, and should be applied to the federal prison population. There is real hope for bipartisan action. When President Obama spoke about criminal justice reform at his recent State of the Union, his stirring words won applause from all corners. As he noted, reform won’t hurt public safety: both crime and incarceration rates have begun to fall together for the first time in 40 years. Now the new Republican majority in both chambers has given indication that legislation may be ready to move. That’s all to the good.

But there’s reform, and then there’s reform. Unfortunately, lawmakers have been tempted to focus only on matters like improving prison conditions and helping those who leave prison as they return to society. To be sure, there’s much to improve. Four in ten federal inmates have a substance abuse problem. One study finds that just under 50% of inmates are convicted of a new crime within three years after release.

These are important issues, to be sure. But that focus alone would mark a serious missed opportunity.

Instead, lawmakers should recognize that the only way to stem the flow of people out of prison is to reduce the numbers going into prison – including the length of sentences – in the first place. The key chance for change is the entry point.

Provisions to reduce federal sentence lengths – which crime experts across the board see as too high – should also be included in any criminal justice reform bill. We will not solve our prison crisis by only focusing on what happens after people go to prison. We must help stop the problem before it starts.