Among the first campaign finance laws in the U.S. was the federal Tillman Act, which has prevented contributions from corporations to political campaigns for more than a century, a policy which was also enacted in many states. Later, laws prevented unions from doing the same in many states. Some states prohibit direct contributions from corporations but not unions, while other states do not restrict these types of contributions in any way. Even where corporations or unions are prevented from making direct contributions they are still able to contribute via political action committees (PACs), which are a “separate and segregated fund” using voluntary contributions from employees or members (union members can opt out of this portion of dues). Despite the extensive history of regulation, little attention has been paid to the question: Do these additional hurdles to contributing affect whether organizations decide to become active in campaign finance?

I take advantage of the variation in policy among the U.S. states to understand how campaign finance regulation may affect the mobilization of different groups in my article “Regulation and Upper Class Bias in Campaign Finance Systems.” The data on organizations was obtained from the National Institute on Money in State Politics, which codes the economic sector of each organization making a campaign contribution. I used an existing database of campaign finance regulations to determine states’ policies regarding prohibitions on direct contributions from corporations and labor organizations and limits on the amount of corporate and labor campaign contributions. I measured how these regulations are associated with changes in a) the number of organizations representing firms, business/trade associations and professional associations that contribute to campaigns; b) the number of labor organizations that contribute to campaigns, and; c) overall bias (the proportion of total organizations making contributions coming from category a) from the early 1990s to 2010.

Though bias is well-documented in D.C., there has been less analysis of the state capitals. Across all states, I find that business-related entities and professional associations outnumber labor organizations in campaign finance systems, as we can see in the figure below (the spikes represent the years in which most states have elections for statewide offices). In only two states are there about the same number of labor organizations giving to campaigns as business and professional organizations. 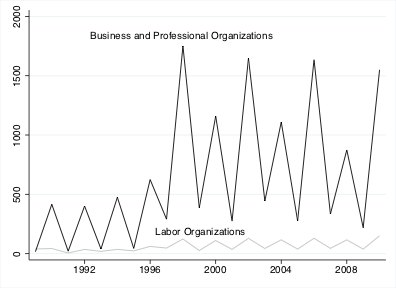 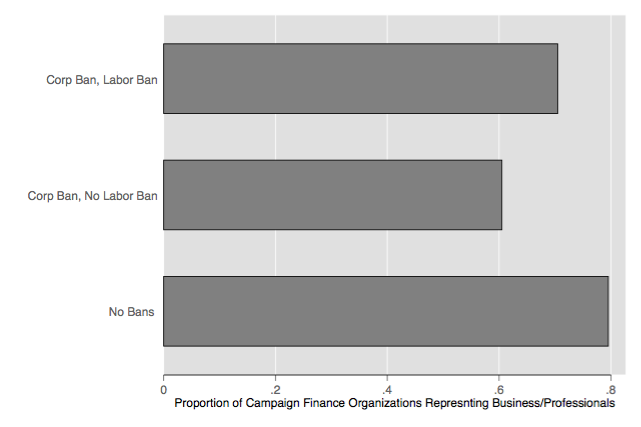 My research shows that even relatively weak regulation (because these groups can still contribute via PACs) affects the overall mobilization of organizations and the amount of bias in campaign finance systems. Greater bias in campaign finance systems is important because campaign contributions are associated with access and, thus, where campaign finance laws are less stringent, access is likely to be more tilted in favor of business and wealthy professionals. Though the relationship between access and policy is not as well understood as it might be, this biased access presumably gives upper class actors a leg up in shaping public policy outcomes.

Christopher Witko is Associate Professor of Political Science and the Director of the Master of Public Administration Program at the University of South Carolina. He studies campaign finance regulation, interest group influence in the policy process and how policy shapes and responds to economic inequality and other economic problems. He is the co-author of The New Economic Populism (Oxford University Press, 2017). This piece is based on his 2017 article, “Regulation and Upper Class Bias in Campaign Finance Systems,” in the Election Law Journal.