You’ve heard the phrase “mass incarceration.” But what, really, does it mean?

Simply put, it is shorthand for the fact that the U.S. incarcerates more people than any nation in the world, including China. And the U.S. is also the leader in the prison population rate. America’s approach to punishment often lacks a public safety rationale, disproportionately affects minorities, and inflicts overly harsh sentences.

We can build a better and fairer system. But before exploring how to fix the problem, it is worthwhile to conduct a brief review of the history of incarceration.

From Noble Intentions to Knee-jerk Result

The Founders, rebelling against a British legal system that vested all power in the Crown, wanted a justice system that guarded against government abuse. Four of the first 10 amendments to the Constitution protect the rights of the accused or convicted. This was a statement of priorities — and the world noticed.

Alexis de Tocqueville, the renowned 19th century French sociologist, came to the U.S. in 1831 to study the young nation’s prisons and penitentiaries. He found that certain states were attempting to administer humane and proportional punishment in a way France, and the rest of Europe, were not. His observations appeared in his classic work, Democracy in America.

Why? Simply put, other countries do not use prison as a one-size-fits-all solution to crime. In 2016, the Brennan Center examined convictions and sentences for the 1.46 million people behind bars nationally and found that fully 39 percent, or 576,000, were in prison without any public safety reason and could have been punished in a less costly and damaging way (such as community service).

But even if they were all released, the U.S. would still incarcerate at a far higher rate than comparable countries. 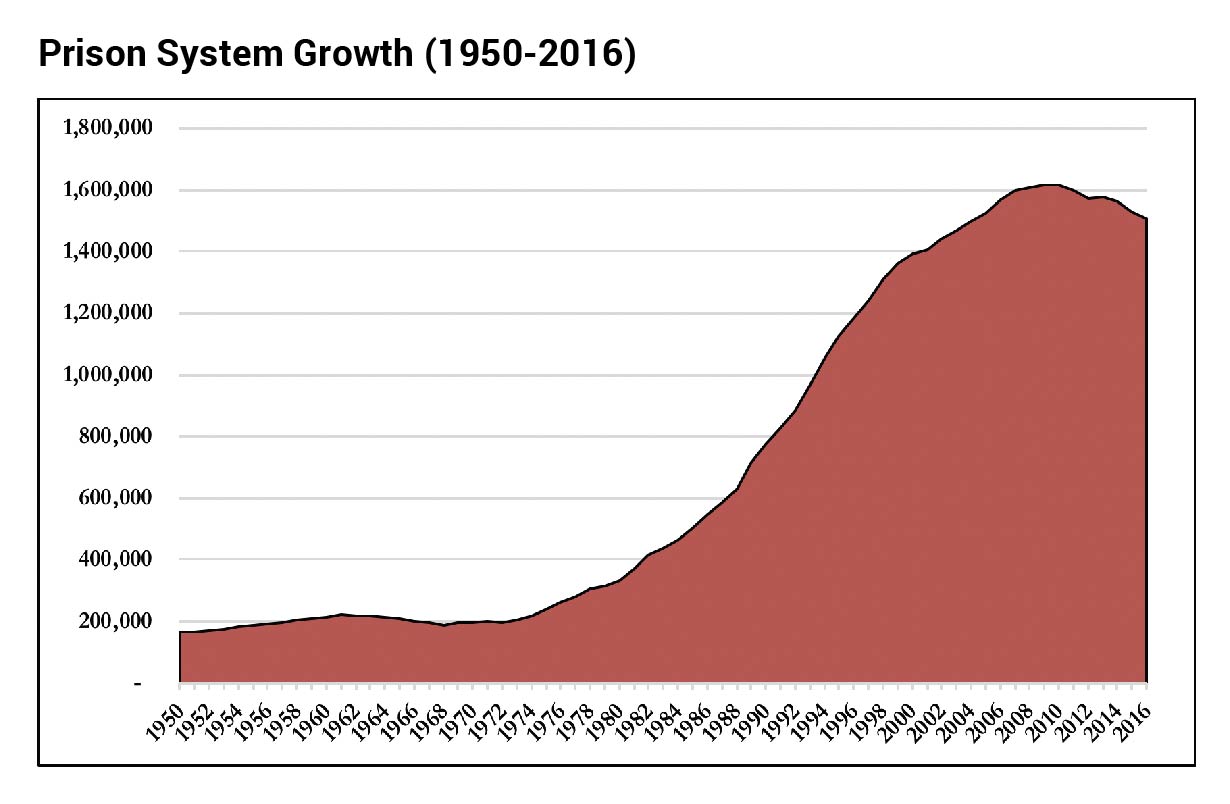 It wasn’t always this way. The prison population began to grow in the 1970s, when politicians from both parties used fear and thinly veiled racial rhetoric to push increasingly punitive policies. Nixon started this trend, declaring a “war on drugs” and justifying it with speeches about being “tough on crime.” But the prison population truly exploded during President Ronald Reagan’s administration. When Reagan took office in 1980, the total prison population was 329,000, and when he left office eight years later, the prison population had essentially doubled, to 627,000. This staggering rise in incarceration hit communities of color hardest: They were disproportionately incarcerated then and remain so today.

Incarceration grew both at the federal and state level, but most of the growth was in the states, which house the vast majority of the nation’s prisoners. The number of prisoners grew in every state — blue, red, urban, and rural. In Texas, for example, the state incarceration rate quadrupled: In 1978, the state incarcerated 182 people for every 100,000 residents. By 2003, that figure was 710.

These changes were spurred in part by laws like the 1994 Crime Bill, which gave states money to perpetuate policies that bred bloated prisons. In fact, while it received little attention, the rise of mass incarceration was a phenomenon that has affected the entire country for four decades.

Recently however, there has been some incremental progress in reducing mass incarceration. In the last decade, prison populations have declined by about 10 percent. Racial disparities in the prison population have also fallen. This is the product of a bipartisan consensus that mass incarceration is a mistake. Lawmakers from both parties have come to realize that locking people up is an expensive, ineffective means to fight crime. Some conservative states like Texas have led the way, undoing many of the harsh policies passed in the 1980s and 1990s. States have seen their prison populations and crime rates decline simultaneously. Unfortunately, however, both President Trump and Attorney General Jeff Sessions are stout reform opponents, threatening the small progress that’s been made.

Yet, it’s important to remember that even at the current rate of decline, it will take decades to achieve incarceration rates appropriate to the current violent crime rate, which is roughly where it was in 1971. And while racial disparities are decreasing, the rate of incarceration for African Americans would only match whites after 100 years at the current pace.

The good news is that at last criminal justice policy has finally begun to change course. But without a sustained effort, this burst of reform will fall short. Mass incarceration was created through decades-long policy shifts at the national, state, and local level. Ending it will require policies just as far-reaching.