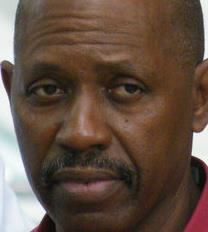 Norris Henderson is the founder and Executive Director of Voice of the Ex-Offender, also known as VOTE, a New Orleans-based grassroots organization working to build political and economic power of people impacted by the criminal justice system. Henderson, a former OSI Soros Justice Fellow, works on a range of issues including police accountability, public defense, and prison reform. He also serves on the Board of Directors for multiple organizations, including Family & Friends of Louisiana’s Incarcerated Children.

We spoke with Henderson about his work, his life, and how they have come to influence each other. Our conversation appears below, edited for space and clarity.

Can you tell us a bit about yourself and how you came to found VOTE?

I’m Norris Henderson. I’m a native New Orleanian. I’ve lived here all my life. I stayed in prison 27 years 10 months and 18 days, and that’s when I actually found out about the right to vote and felony disenfranchisement.

This organization was actually founded while I was inside. It was the progeny of the Angola Special Civic Project, which was kind of like the political arm inside of the prison. We started working with all of these prisoners across the country. We started looking at, how can we change some of these archaic laws that got us confined here? And so that’s what we started doing – looking at that question and making a big push around civic engagement.

Why do you think the right to vote is important?

That’s what democracy’s all about. You almost don’t exist in this country if you don’t have your right to vote. You don’t have the power to influence outcomes – you’re just here. This is more than just about voting. It’s about redistricting. It’s about who determines who represents me, and which particular district I’m living in. It about how much money is coming to this district.

I’ve been in prison and I can vote – because I have my voting rights back. I’m trying to ensure that this becomes the norm, not the exception. Just like they automatically take that right away from you when you walk into prison, I want it automatically restored as soon as you walk out.

Folks who have been fighting to get the franchise – they want it. They want to be in the position to elect the next judge, the next district attorney. Because our folks understand the power of the district attorney, they understand the power that judges have. So in all these elections, our folks show up, because we have a vested interest in engaging in the political process.

How do you see voting rights fitting in with our treatment of people with past criminal convictions generally?

If you don’t have your voting rights, you can’t say anything. In the legislature right now, they’re trying to pass a bill that says if you’ve been convicted of one crime, you will be denied federal benefits. They wouldn’t be saying that to their constituency base if their constituency base had power. So it all ties together. If the formerly incarcerated people we’re trying to register to vote right now – if we wake these folks up, they are going to say, “What do you mean they’re trying to stop me from getting benefits?”

What unique challenges and opportunities does working on this issue in Louisiana present?

This is one of the first years that we actually got all of these civil rights organizations on board fighting for rights of formally incarcerated people to vote. We realize now the power that lies within this base in the sense of the support that can come from it. The biggest thing is that even for those folks, our folks, who can’t vote – they inform their brother’s vote, their sister’s vote, their mother’s vote. And everybody is starting to see now, especially with this contentious presidential election going on, the importance of that engagement.

How do you talk to about voting rights with people who may be initially inclined to oppose your views on restoration?

Especially in this state, everybody’s talking about reentry. People need to reintegrate. Well, the high point of civic engagement is being able to vote. People who are civically engaged are less likely to recidivate. So that’s been my conversation. What is your objective? What are you trying to achieve? In a state that leads the nation in per capita incarceration, we have a very high recidivism rate. Now, if you want to keep people out of prison, let people become a part of the community. People not only want to be a part, they want to belong. And if you keep pushing them out, they’re still on the fringes.

What do you find to be the most challenging parts of this work?

Our biggest struggle is educating people about all of these intersecting lines between mass incarceration, criminal justice reform, reentry, civic engagement, the Census, redistricting. All of that stuff ties in together, including serving on the jury. You don’t get called for jury duty unless you’re on the voter rolls. If you’re not a registered voter, you don’t get called for jury duty. As formerly incarcerated folks and non-formerly incarcerated folks – we exclude ourselves from the process when we’re not registered to vote.

How do you keep yourself engaged in this reform work, despite setbacks?

I feel the sunshine. I see these incremental changes that we are making. This is planting season, so we’re planting and we’re waiting for the harvest to come around. That’s what we’re doing now: we’re building this base. We’re trying to do our part by connecting all of the dots to everything. To the guy who can’t get a job: the reason you can’t get a job is primarily because people use your criminal history as the litmus test. You’ve been to prison, so you have to check the box. So we’ve been showing people that we’re going to have the box removed. We’ve been a part of this national movement to ban the box around the jobs. And we just got started working on the housing policy, which is probably going to be a battle across this country – about removing folks with criminal histories from public housing. And so it is these incremental wins that encourage people that you have worth, but you’ve got to be heard.

That’s one of the commitments I made for myself, and for everybody that I left in prison – that I will go out there and I will fight for everything that we want. The worst thing that could happen is that someone could tell me no. And it isn’t like I’ve never heard no before.

In what ways can people both in and out of the state support your work?

One of the things people can do in state is to actually get engaged with us. And I tell people all the time, help isn’t what you give me, help is actually what I need. So you have to let me define what that help is. Don’t do something on our behalf without checking in, because you may be causing more harm than good. And so the biggest thing in these kind of large campaigns, is that we need physical resources, monetary resources, and technical resources. For example, right now, we are looking for a historian to help us with the history of felony disenfranchisement, in Louisiana specifically. So there’s a whole breadth of things that people can do to help, but they have to check in first in order to figure out what we actually need.