Donald Trump’s first week as the president of the United States of America has been an eventful one. He issued 14 executive orders on issues ranging from rolling back the Affordable Care Act to building a wall at the southern border and cutting federal funding to sanctuary cities. But some of his most ludicrous claims this week have been about crime and voter fraud. So, let’s distinguish the alternative facts from the real ones:

Claim: In week one of his presidency, Trump and his press secretary, Sean Spicer, both doubled, tripled, and quadrupled down on their baseless allegations of mass voter fraud in the 2016 general election. In his first official meeting with congressional leaders, Trump falsely claimed that millions of unauthorized immigrants had robbed him of a popular vote majority. Spicer repeated these claims at a briefing on Tuesday, but wouldn’t provide any concrete evidence. Now, Trump is expected to sign an executive order calling for an investigation into voter fraud.

Facts: There is actually no evidence of massive voter fraud — none. A Brennan Center study found that most reported incidents of voter fraud are actually traceable to other sources, such as clerical errors or bad data matching practices. The report found fraud incident rates between 0.00004 percent and 0.0009 percent. 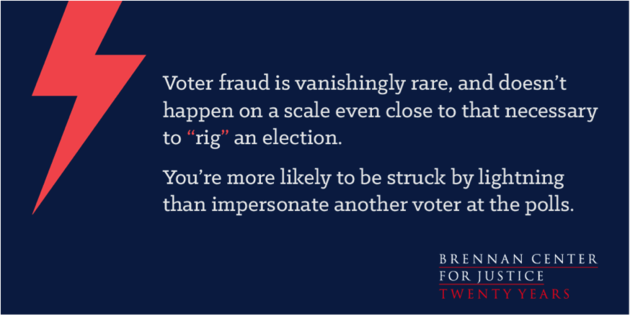 A comprehensive 2014 study published in The Washington Post found 31 credible instances of impersonation fraud from 2000 to 2014, out of more than 1 billion ballots cast. Even this tiny number is likely inflated, as the study’s author counted not just prosecutions or convictions, but any and all credible claims. 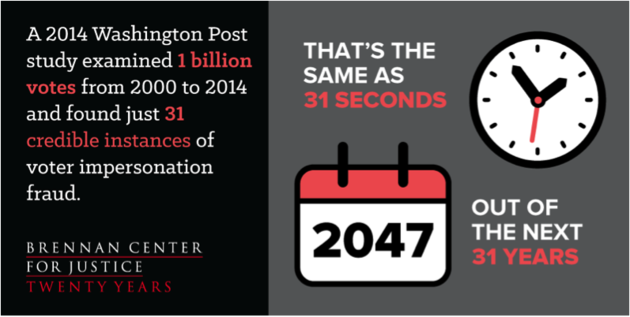 Trump specifically said millions of noncitizens voted. But a review of the literature found noncitizen voting is also vanishingly rare.

A long list of legislators, election administrators, and others from both parties have spoken out against these false claims. 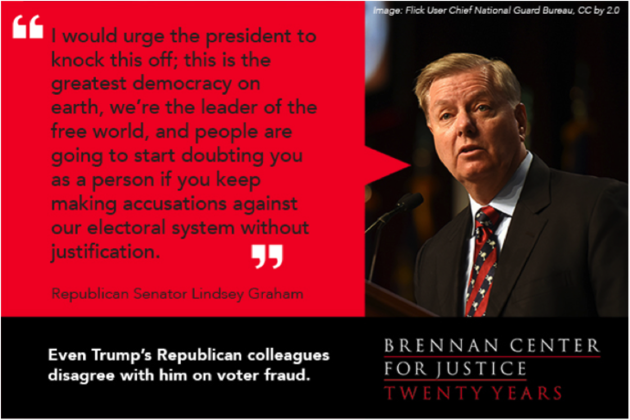 Claim: It didn’t take long after being sworn into office for Trump to continue to make misleading statements about crime in America.

In his Inaugural address, Trump stated: “Crime and gangs and drugs have stolen too many lives and robbed our country of so much unrealized potential.” He continued, “This American carnage stops right here and stops right now.”

Facts: Crime rates actually remain at historic lows. According to a Brennan Center report, crime in major cities fell 65 percent over the past 25 years. 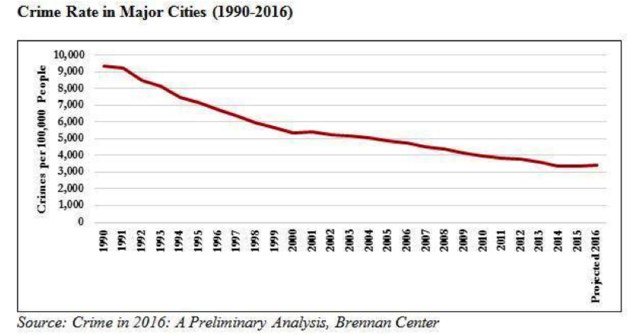 According to the FBI Uniform Crime Report Program, the overall crime rate was down again in 2015 dropping for the 14th year in a row. Violent crime is half of what it was in 1991, and property crime is down 43 percent in the past 25 years.

Claim: Immediately following Trump’s Inaugural address, the White House posted additional statements on a new page on its website, “Standing Up For Our Law Enforcement Community,” stating: “In 2015, homicides increased by 17% in America’s fifty largest cities. That’s the largest increase in 25 years. In our nation’s capital, killings have risen by 50 percent. There were thousands of shootings in Chicago last year alone.”

Facts: These statistics are taken from Trump’s acceptance speech at the Republican National Convention in July 2016. They are misleading. There is no national murder wave. However, select cities have seen increased murders. A June 2016 Department of Justice study showed the murder rate in the nation’s 56 largest cities rose by 16.8 percent in 2015. But two-thirds of that increase occurred in just 10 cities. A Brennan Center study of the 30 largest cities showed the murder rate rose by 13 percent in 2015, and 14 percent in 2016. However, these national averages are skewed by a handful of cities. More than half the rise in 2015 was caused by Baltimore, Chicago, and Washington, D.C. Nearly half of the rise in 2016 was caused by Chicago.

Claim: Of course, it doesn’t end there. Thursday, at a speech in Philadelphia, Trump continued to make statements about high crime rates in the United States and in Philadelphia. He started by saying: “Just look at the 30 largest cities. In the last year alone, the murder rate has increased by an estimated 14 percent.”

Facts: Trump’s statistic on the murder rate in the nation’s 30 largest cities is correct. In fact, he cited a Brennan Center report, but he omitted important context. While the murder rate across these cities rose by 14 percent in 2016, almost half of that increase can be attributed to a dramatic increase in Chicago that skewed the national average. Nationwide, murder rates and crime rates remain near historic lows.

Claim: He then went on to say, “Here in Philadelphia the murder rate has been steadily, I mean, just terribly increasing.”

*A special thank you to Lauren-Brooke Eisen, Ames Grawert and James Cullen for their contributions to this post.