Donald Trump shared several tweets Saturday about crime in Rep. John Lewis’s (D-Ga.) district after the Georgia congressman was critical of Trump in an interview. Below is a fact check of his tweets.

Note: Lewis’s 5th Congressional District includes all of Atlanta and parts of Fulton, Dekalb, and Clayton counties. The FBI Uniform Crime Reporting Program does not report data for partial counties, so the tables below include full data for all four jurisdictions.

1.    “Congressman John Lewis should spend more time on fixing and helping his district, which is in horrible shape and falling apart (not to mention crime infested) rather than falsely complaining about the election results."

Fact: This statement about crime is misleading. Atlanta, along with Fulton, Clayton, and Dekalb counties, which make up Lewis’s district, has seen violent crime fall by 14 percent and murder by 7 percent since 2010. During Lewis’s tenure, the violent crime has plummeted to less than half of what is was when he entered office in 1987.

The violent crime rate in these areas is 32 percent lower than in other urban areas the size of Atlanta. The murder rate is 37 percent lower.

2.    “Congressman John Lewis should finally focus on the burning and crime infested inner-cities of the U.S. I can use all the help I can get!”

Fact: While it is true that some cities have seen murder increases in the last two years, as the Brennan Center reports, crime and murder levels are still very low compared to historical trends. 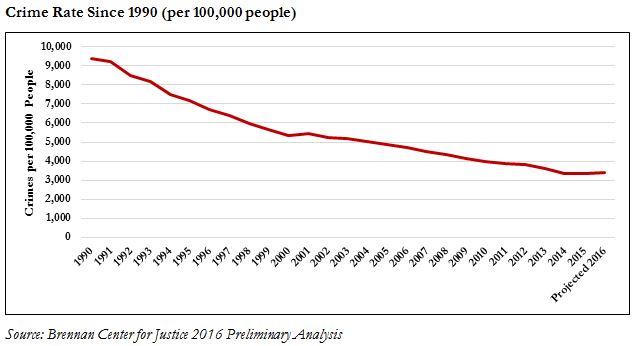 In the 30 largest cities, the murder rate increased in both 2015 (by 11 percent) and in 2016 (by 13 percent). However, these national averages are skewed by a handful of cities. More than half the rise in 2015 was caused by Baltimore, Chicago, and Washington, DC. Almost half the rise in 2016 was caused by Chicago alone. Moreover, since the murder rate remains near historic lows, measuring in percentage increases overstates the increase in the actual numbers of murders.

The murder increases in these cities are serious problems that must be addressed. But the data do not reflect any sort of national murder wave.