Not surprisingly, the reforms were especially popular among Democrats, who have been on the receiving end of gerrymandering this decade. But the measures also earned wide backing from Republicans, winning with more than 60 percent support in four of the five states.

To understand how the measures did among voters, we analyzed the approval rate in each county and compared support for reform with votes cast in a statewide partisan election. Our preliminary analysis makes it clear that these proposals did strikingly well among Republicans, far outperforming candidates of either party in nearly every instance.

In other words, while the political class may still be divided along partisan lines about fixing gerrymandering, voters aren’t. The American people are strongly in favor of efforts to reform how redistricting is conducted in the states so that partisan lawmakers don’t have unfettered control of the process.

The strongest support this cycle for redistricting reform came in Ohio, where in May voters approved a constitutional amendment banning partisan gerrymandering with a whopping 75 percent of the vote. To be sure, the amendment, known as Issue 1, did better in districts held by Democrats. But as shown in the first chart below, it received majority support in all 88 of Ohio’s counties, and it won supermajorities in every one of Ohio’s 16 congressional districts.

Indeed, the measure performed substantially better than Democrat Rob Cordray did running for governor this fall. Cordray won 46 percent of the statewide vote compared to Issue 1’s 75 percent. And Cordray’s average level of support by county was 35 percent, compared to 69 percent for Issue 1. 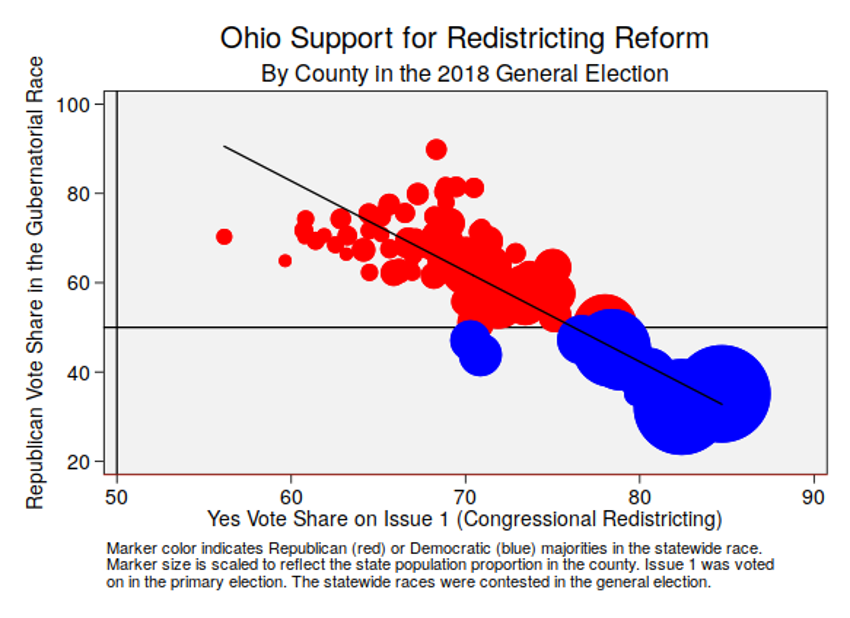 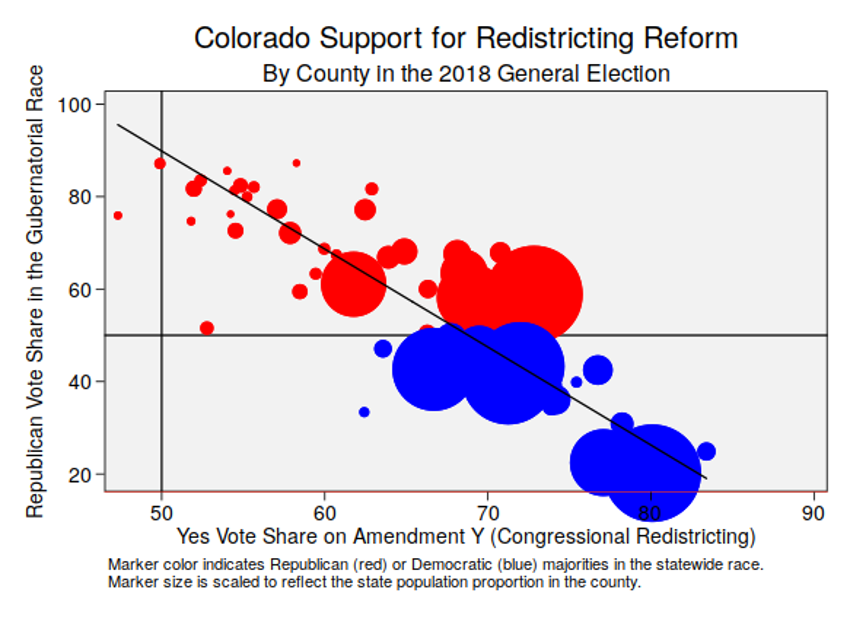 Redistricting reform was almost as popular in Michigan. There, a citizen-led effort known as Proposal 18-2 to create an independent redistricting to draw both legislative and congressional districts faced claims from Republican officials that it was a Democratic power grab. Despite that, the measure won more than 61 percent of the statewide vote and a majority of the vote in 66 of the state’s 84 counties.

Again, the proposal was more popular in areas of the state that supported Democratic statewide candidates than in ones that were won by Republicans. But, as shown in the chart below, the measure won in a majority of Republican counties, including large ones like Ottawa County in the Grand Rapids metropolitan area and St. Clair County in the Detroit metropolitan area.

And again, the measure easily outperformed the Democratic candidate for governor, Gretchen Whitmer, who was elected with 53 percent of the vote. 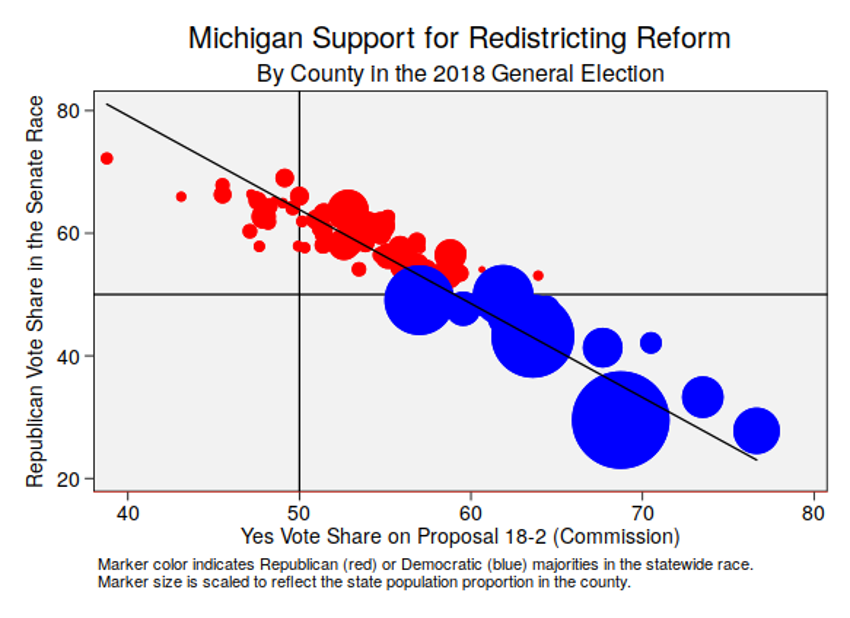 In Missouri, a constitutional amendment to strengthen redistricting rules and create a state demographer to draw maps, passed with 62 percent of the vote. It won 82 of the 116 counties in the state, including a majority of heavily Republican counties.

Notably, while Democrat Claire McCaskill won only about 31 percent of the vote on average at the county level, the redistricting amendment won on average 54 percent support. (See chart below.) 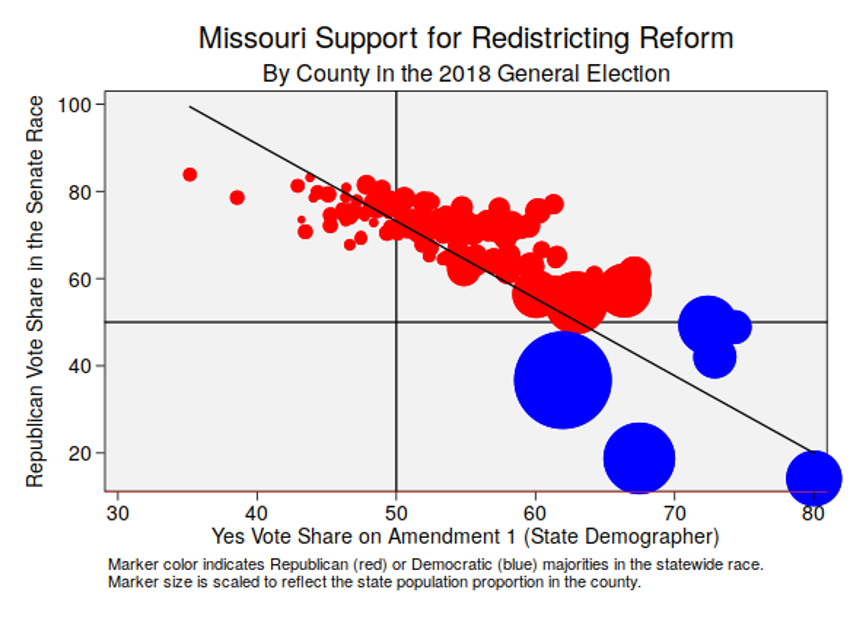 Only in Utah did a ballot measure to create an advisory commission win by a less than overwhelming margin in 2018. With some votes left to count, it appears the measure, known as Proposition 4, will be passed with 50.3 percent of the vote; a margin of about 7,000 votes.

But that narrow win is a bit deceptive. Given how red Utah is, a win on any measure is only possible with substantial support from Republicans. Indeed, the measure performed much better than Democratic Senate candidate Jenny Wilson, who won only 30 percent of the statewide vote in losing to Mitt Romney. On average at the county level, Wilson won 23 percent, while Proposition 4 won 42 percent — indicative of a sizable number of Romney/Proposition 4 voters. (See chart below.) 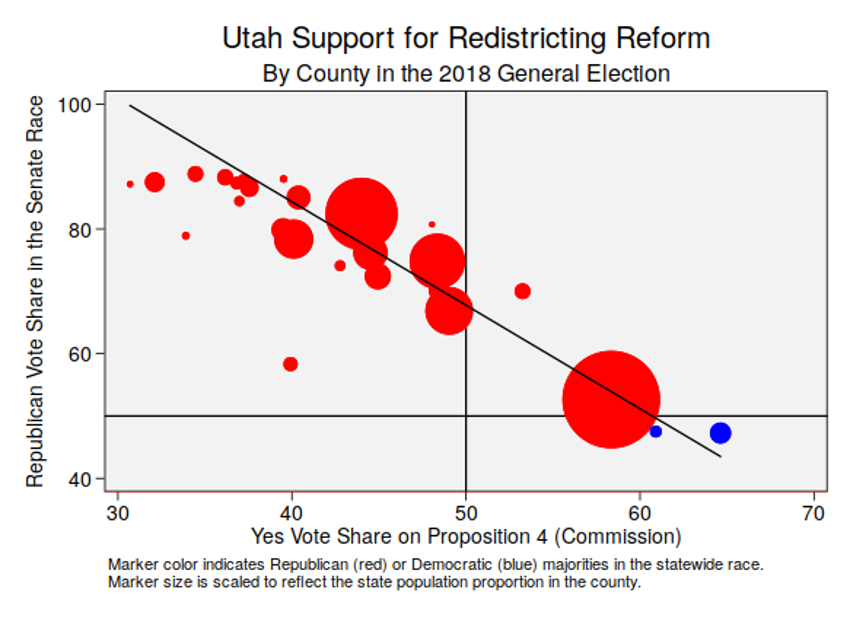