The Community Reinvestment Act (CRA) has been in the news recently, with the U.S. Treasury Department suggesting significant changes to the landmark 1977 legislation that requires banks to make loans in underserved areas within the communities in which they operate.  The Treasury, backed by the banking industry, has proposed a series of revisions that would narrow the scope of enforcement and make it easier for lenders to achieve high marks for fair lending.

However, regulators already appear to face hurdles in enforcing fair-lending standards such as the CRA and Equal Credit Opportunity Act (ECOA).  We document that lenders reduce their compliance with fair-lending standards after their elected representative becomes more powerful.  Powerful politicians are capable of affecting how regulatory agencies enforce rules. Consequently, lenders protected by powerful politicians can reduce compliance with fair-lending regulations without expecting to suffer negative consequences.  Consistent with this argument, we find that lenders restrict credit to underserved populations such as low-income consumers and racial minorities after their home-state U.S. senator ascends to become the chair of an important committee.

We focus on Senate committee chairs for two reasons.  First, Senate committee chairs are very powerful legislative figures: they have an outsized role in determining what legislation sees the floor and possess significant influence over the allocation of government resources.  In addition, committee chairs in the Senate are selected based on a rigid, seniority-based rule (the chair is awarded to the longest-serving committee member from the majority party). This allows us to identify the effects of political power changes on consumer credit access without having to worry about confounding factors such as current economic conditions in senators’ homes states.  For example, Daniel Inouye (D—Hawaii) became chair of the Senate Appropriations Committee in 2009 ahead of Barbara Mikulski (D – Maryland) because Inouye had served on the committee continuously for 38 years (versus 22 years for Mikulski).  Therefore, the fact that Hawaii, rather than Maryland, is represented by a powerful committee chair in 2009 is unlikely to be related to contemporaneous economic conditions in either state.

We combine data on Senate committee chair turnover with anonymized, individual-level consumer credit data covering the entire United States from 1999 to 2014.  We measure consumers’ access to credit using a variable named “supply ratio,” which is the ratio of new credit accounts opened to new credit applications for a given person in a given quarter.  We then regress “supply ratio” on a variable called “powerful politician” which takes the value of one if an individual’s home-state U.S. senator became a committee chair in the last two years and zero if not.  Hence, our analysis compares the change in credit access for individuals affected by a recent Senate committee chair ascension to the change in credit access for individuals in unaffected states.

We find that subprime borrowers lose access to credit in the two years after their home-state Senator becomes more powerful.  Specifically, we find that consumers’ likelihood of obtaining credit declines by 2 to 4 percentage points compared to borrowers in other, unaffected states.  Importantly, these effects are strongest for consumers that reside in majority-minority neighborhoods that are often subject to fair-lending guidelines such as the CRA and ECOA.  In addition, our results hold across all states and all time periods, and hold for both Democrats and Republicans. Hence, differences in sample periods or political ideology are unlikely to explain our results.

We provide evidence that banks reduce their compliance with fair-lending regulations once they are protected by a powerful politician (the new committee chairperson).  Specifically, we find that individuals’ access to credit is discontinuously lower in neighborhoods that are “just covered” by the fair-lending provisions of the CRA. Moreover, banks’ regulatory CRA exam ratings decline in affected states, which suggests that lenders reallocate credit away from disadvantaged borrowers despite knowing that such reallocations are large enough to be detected by regulators. The reduction in lending is also strongest in counties containing banks with a history of donating money to the new Senate committee chair.  Overall, our findings are consistent with a “political protection” hypothesis in which “protected” lenders can reduce compliance with federal fair-lending guidelines without suffering significant consequences.

Why do banks reduce credit access to disadvantaged borrowers? 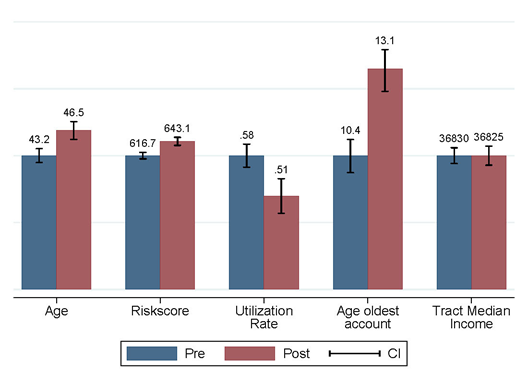 These figures present the characteristics of minority borrowers who receive at least one new credit line in the two years before (Pre) and after (Post) a home-state senator becomes a powerful committee chair.

Overall, our findings suggest that powerful politicians can use their influence to protect lenders from the consequences of reduced compliance with fair-lending guidelines such as the CRA.  Our findings also suggest that watering down enforcement of the CRA would make banks more profitable, but would also reduce credit access for disadvantaged borrowers such as poor people and racial minorities.  This is the key trade-off that lawmakers must consider as they debate the future of fair-lending regulations such as the CRA.