Prison reform advocates received some good news this week from The Washington Post: the rate of black imprisonment is falling, and “hasn’t been this low in a generation.” Even a “seasoned criminologist” may find it surprising, Prof. Keith Humphreys of Stanford writes for The Post, that “the juggernaut” of mass incarceration “reversed direction 15 years ago.”

This is great news – but it isn’t the full story. Yes, black incarceration has consistently fallen over the last 15 years. But even after 15 years of progress, racial disparities remain large, and are unlikely to disappear any time soon. The racial justice gap, and mass incarceration more generally, will not come to an end without a profound paradigm shift. 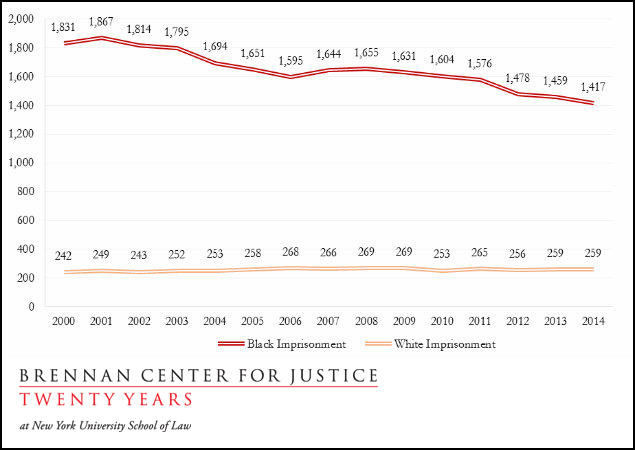 Black incarceration fell by 23 percent between 2001 and 2014. Even so, as shown above, black men and women are still five and a half times more likely to find themselves in prison than whites. We’re closing the gap — in 2001, blacks were incarcerated at nearly eight times the rate of whites — but even this does not come close to fixing a criminal justice system that has leaned harder on black communities than white ones.

Put in context, the 23 percent decline in black incarceration is even less impressive. At the current rate of decline (about 1.8 percent per year), racial disparities in America’s prisons would disappear in about 100 years – by 2109. That is too slow. While any progress is welcome, the “juggernaut” of racial bias has yet to be vanquished. Even if current policies are helping, they do not offer a blueprint for the bold change needed to end mass incarceration.

We should not be satisfied with trends that will reduce prison disparities in 100 years. Humphrey’s analysis of incarceration trends closes by noting that “the fuel of much social change is optimism that the future can be better than the past.” This is true – but optimism has to be matched by a realistic assessment of defects. If the country truly understood how unequal our systems of justice are, even despite recent progress, reformers would not be alone in “striving to create a safer, more equitable and freer society.”