So far this redistricting cycle, the U.S. Supreme Court has not weighed in on the issue of partisan gerrymandering. But its ruling reviving a Maryland case contending that the congressional map drawn by Democrats in 2012 was an unconstitutional political gerrymander may have set the stage for the Court to consider the matter.

On Tuesday, the Court unanimously decided that a federal trial judge was wrong to dismiss the challenge. Ordinarily, the rules call for a three-judge panel to hear objections to statewide redistricting plans. But District Court Judge James Bredar dismissed the case on his own, holding that the partisan gerrymandering claim was “insubstantial” and did not warrant full consideration. The Court of Appeals for the Fourth Circuit agreed.

In reversing both courts, the Supreme Court in Shapiro v. McManus, held that they had been too dismissive of the plaintiffs’ partisan gerrymandering claim. It found that the statute on three-judge panels was unambiguous and made appointment of a panel mandatory except in the rare case where a claim was “essentially fictitious” or “obviously frivolous.” The Court said the partisan gerrymandering claims in the Maryland case “easily cleared [that] low bar” because they were based on a theory of partisan gerrymandering first suggested by Justice Anthony Kennedy in his concurrence in Vieth v. Jubelirer in 2004. The Court emphasized that it was not ruling on the merits of the case, merely that the challenge should be heard by a three-judge panel.

Although it has survived legal challenges complaining of racial gerrymandering, the state has been widely condemned for its lines. For instance, Maryland’s 3rd Congressional District, currently held by Rep. John Sarbanes (D), was characterized by a federal appeals judge as a “broken-winged pterodactyl, lying prostrate across the center of the state.” The 3rd snakes 225 miles through four different counties, and inspired a marathon event in which reform advocates walked, biked, and kayaked across the district — a journey that took three days. 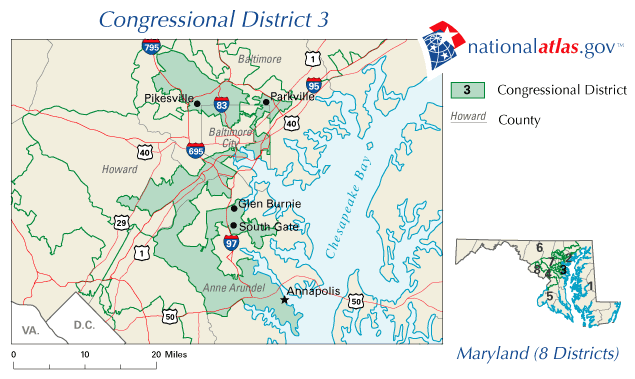 By insisting on a three-judge panel, the Supreme Court’s ruling is important for another reason. Rulings by three-judge panels bypass the usual route for appeals and go straight to the Supreme Court. While the Court still can decline to hear a appeal that come to the Court this way, in recent years it has been much less willing to do so, especially in redistricting and voting rights cases.

The Maryland case thus could give the Court its first opportunity in nearly a decade to rule on whether partisan gerrymandering claims are legally viable — a question the Court has been badly split on in the past — and, if so, what the standards are for proving them.

The Maryland case isn’t the only partisan gerrymandering case headed the Supreme Court’s way. Another case, from Wisconsin, also is in its early stages before a three-judge panel. Depending on how the Maryland and Wisconsin cases play out, the next few years could be big ones for reformers hoping that courts will at long last constrain partisan manipulation of congressional district lines.