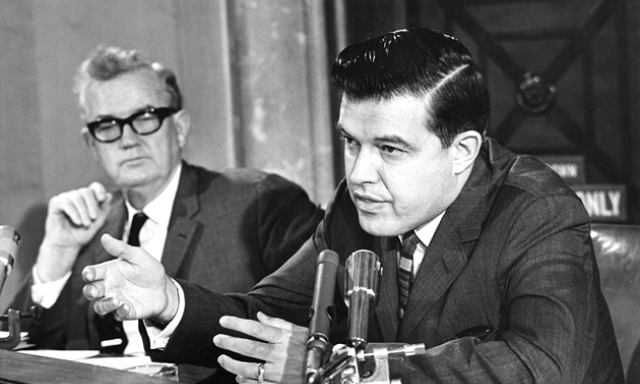 Thirty-eight years before Edward Snowden’s leaks, the NSA was embroiled in its first real scandal over secret surveillance. Then NSA director, Lt. General Lew Allen, was the first director in the agency’s history to publicly testify before Congress. A quick review of the circumstances surrounding his historic testimony reminds us that it is naïve to think that a permanent, universally acceptable balance between privacy and security can ever be struck, especially in a world of rapid technological change.  But it also reminds us that abuses, even severe ones, can be met by serious investigation and broad debate — and that reforms, even if temporary, are possible.

At the time of Allen’s testimony in 1975, the Church Committee — a group of Senators charged with investigating intelligence and federal law enforcement abuses — was examining a pair of linked NSA operations: Project SHAMROCK and Project MINARET.  SHAMROCK actually predated the NSA, originating with World War II Army censors, who had access to the nation’s correspondence through their presence in telegraph offices.  With the war ending, top administration officials convinced the major private telegraph operators, then the titans that stood astride international communication, to provide copies of all messages leaving the United States.  The program collected huge numbers of messages, though the NSA purported to separate messages of “foreign intelligence value” from the rest, and to avoid collecting communications that involved only U.S. citizens.

But technology and customer requirements soon changed. In the 1960s, the telegraph companies handing over the messages, for the most part, stopped providing paper records for the NSA to copy onto microfilm and instead began allowing the NSA to copy magnetic tapes directly. This made it much easier not just to screen the messages based on broad criteria, but to search the messages themselves.

Starting in 1967, the executive branch, facing levels of domestic unrest not seen in decades, started asking the NSA to search these outgoing messages for information on U.S. citizens and domestic groups.  The use of SHAMROCK information to monitor a list of domestic entities became known as MINARET.  Through MINARET, the government spied not only on suspected drug runners, but also on “extremist” persons, anti-war protestors, and other targets of interest, resulting in more than 1,600 U.S citizens being tracked.  As Sen. Frank Church (D-Idaho) , chairman of the Church Committee, noted, many people who were “wholly inappropriate for  . . . surveillance” ended up having their mail opened and private messages read.

And so General Allen came before the Church Committee to defend such agency actions. The call and response between Allen and his supporters in Congress is particularly familiar to our contemporary ears. In his opening statement, Allen asserted that the agency had “strict procedures to [e]nsure immediate and, where possible, automatic rejection of inappropriate messages . . . [examining only] messages which meet specified conditions and requirements for foreign intelligence.”  Sen. John Tower (R-Texas) noted that the NSA was appropriately employing advance “computer age” technology and that “the people’s right to know must of necessity be subordinated to the people’s right to be secure.”

Nonetheless, Congress took action to curb the NSA’s activities. The FISA court was created by Congress in 1978 largely as a reaction to MINARET and SHAMROCK.  The secretive FISA court was an effort to balance the executive’s perceived need for information and secrecy with the strictures of the law and the Constitution.  Today, before conducting “electronic surveillance anywhere in the United States” for foreign intelligence purposes, executive agencies must get FISA court approval.

Today, PRISM and dragnet metadata collection under Section 215 of the Patriot Act, controversial as these programs are, are a testament to the tangible role the FISA court plays in monitoring the intelligence community. In contrast to SHAMROCK, these programs involve at least some regular oversight from entities outside the NSA. The government also disclaims any intentional collection of purely domestic communications related to these programs, even if it does collect domestic metadata. FISA court oversight is far from perfect, but it has certainly changed the landscape of foreign intelligence surveillance.

In other ways, though, the problem remains the same.  As in the 1970s, today’s programs matured behind a shroud of classification, coming to public attention in spite of attempts at secrecy.  Then, as now, the sheer scale of the collection is mind boggling, and the efforts to protect U.S. citizens from undue invasions of their privacy are too secretive and too easily circumvented to justify reliance on the executive’s good intentions.

Also eerily similar is the debate over just what is legal. At a Church Committee hearing, Sen. Walter Mondale (D-Minn.), after questioning an NSA official on MINARET and SHAMROCK’s justifications, exclaimed, “He still thinks they’re legal!” – a shout that echoes today as we once again consider the proper role of government surveillance in our democracy.

It is tempting to think that advancing technology has launched us into a brave new world of surveillance in which history can provide no guidance. But that is rarely the case, and it is not so here. The balance we seek to strike today is the same one that has stymied policymakers for decades. And the lesson is clear: surveillance authorities are prone to abuse – but amenable to reform.