Kentucky Gov. Steve Beshear issued an executive order today that will make it possible for more than 170,000 Kentucky citizens with past criminal convictions to get back their right to vote — an estimated 140,000 are immediately eligible to have their rights restored and another 30,000 will be over time. The announcement is an incredible breakthrough in the movement to end criminal disenfranchisement policies nationwide. Some of the Kentucky citizens given a second chance today have waited decades for the right to vote.

The figures used to assess the order’s impact were estimated using data from several sources, including the 2010 U.S. Census, the Sentencing Project’s estimates of disenfranchised populations, and federal Bureau of Justice Statistics data of the proportion of individuals on parole and probation with felony convictions classified as non-violent or otherwise.

Before today, Kentucky was one of only three states (with Florida and Iowa) that permanently disenfranchised all citizens with felony convictions. In these states, citizens are barred from the polls even long after they have already paid their debt to society.

Prior to this executive order, the only hope Kentuckians with criminal convictions in their past had for ever voting was to petition individually for assistance — their voting rights were completely at the mercy of the governor. This was a bleak and often futile process.  One previous governor required people to submit an essay and three character references in order to even be considered for rights restoration.

Under this new system, Kentuckians who meet the criteria can get their right to vote back. There is no discretion or ambiguity about it. That dramatic change is significant because it comes in a state with such a harsh law, and one of the largest concentrations of disenfranchised Americans.

This news is really important, both in Kentucky and nationally. 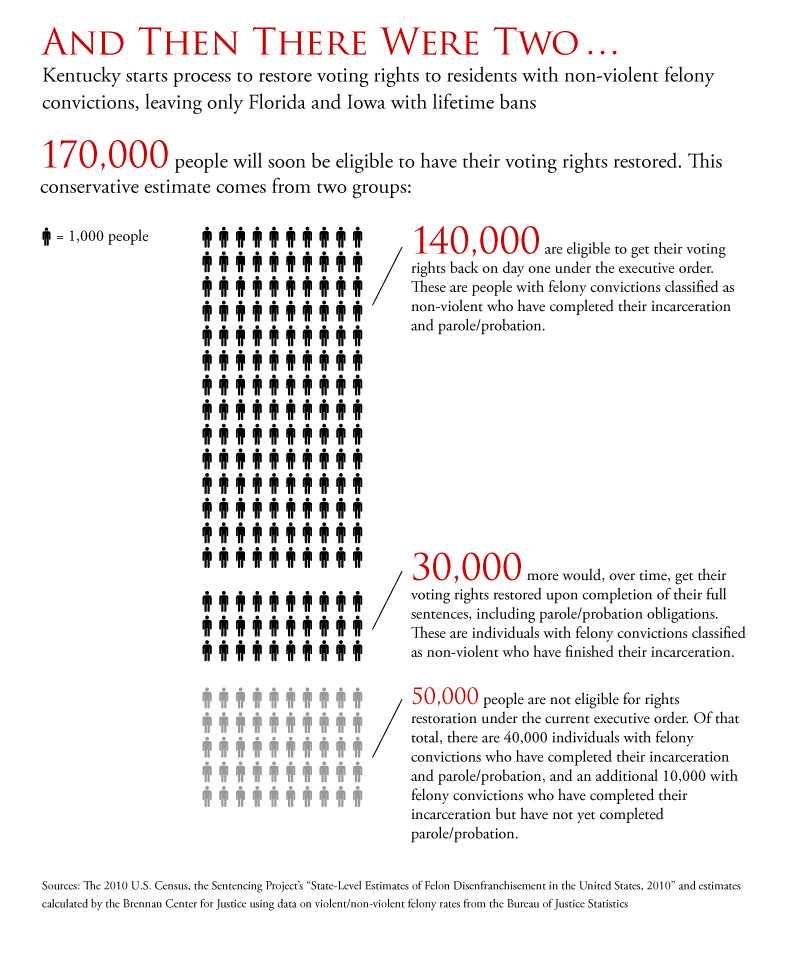 Kentucky’s new policy will enhance public safety. Nationwide, groups like the American Probation and Parole Association (APPA) support rights restoration because law enforcement professionals understand it aids the re-entry process. As former APPA Executive Director Carl Wicklund wrote in Kentucky last year, “when people vote, they are making an investment in their community.” Research supports this notion. One study found “consistent differences between voters and non-voters in rates of subsequent arrests, incarceration, and self-reported criminal behavior.” Another study, this one by the Florida Parole Commission, found that the recidivism rate of Floridians with criminal convictions whose voting rights were restored was one-third the rate of those who remained disenfranchised. Kentucky will similarly benefit from potentially tens of thousands of newly invested citizens.

Those newly invested citizens will also strengthen their communities’ voices in Kentucky’s democracy — especially minority communities. Prior to this order, 1 in 5 African Americans could not vote in the state because of a felony conviction — a rate even higher than the 1 in 13 African Americans disenfranchised nationally. The right to vote will ripple forward from parents who model civic participation for their children. And more engaged communities will have greater say in the policies that government deals with, from schools to taxes to policing.

Kentucky’s move also builds on recent momentum for change on this issue. Over the past two decades, more than 20 states have taken legislative or executive action to allow more people with past criminal convictions to vote, to vote sooner, or to access that right more easily. The progress has been notably bipartisan, and includes reforms in six states over the past five years.

But even with today’s breakthrough, more than 4 million Americans nationwide are barred from the polls because of a past felony conviction — even though they are already part of their communities. The right to vote should be restored to all Americans upon their release from incarceration, but too many states still fall short.

Kentucky itself still needs constitutional reform — the kind of change that incoming Gov.-elect Matt Bevin has publicly supported. He should build on today’s advances, which leave room for further improvement while offering dramatic change. In Kentucky, as in much of the country on this issue, the work continues but the momentum is real.