Senators Al Franken (D–MN) Ron Wyden, and Jeff Merkley (D–OR) have announced they will not submit affirmative “blue slips” to the Senate Judiciary Committee for two of President Trump’s judicial nominees, effectively halting nomination proceedings. This has renewed debate over the utility of the blue slip. Some have called for its elimination, arguing it allows needless obstruction of qualified nominees. Senator Mitch McConnell’s recent statement that “the blue slip, with regard to circuit court appointments, ought to simply be a notification of how you’re going to vote, not the opportunity to blackball,” indicates Republicans will soon move to eliminate or weaken the blue slip. Democratic senators and advocates argue the blue slip serves an important purpose, and hope to persuade Republicans to maintain the tradition. The ongoing blue slip debate is peppered with misconceptions about the blue slip’s history and current usage. Here are five corrections to the blue slip debate. 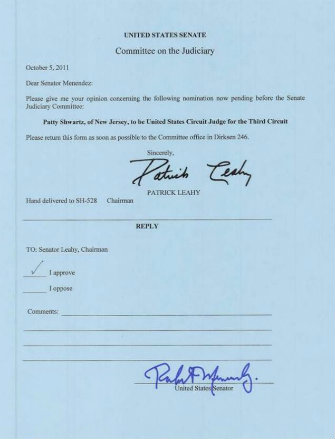 1. Blue slip policy has changed multiple times in recent decades, but the current policy is the same blue slip policy Chairman Leahy maintained during both the Obama and Bush presidencies.

2. The way Democrats are using the blue slip is not new. In fact, Republicans are calling for Democrats to move nominees through the Judiciary Committee significantly faster than they did under Obama.

The confirmation process for Obama’s nominees was also unusually slow relative to past presidencies, partially due to Republican blue slip threats. Sheldon Goldman, Professor of Political Science at the University of Massachusetts, Amherst, measured historical senatorial delay of judicial confirmations, and found that Obama’s nominees faced “unprecedented levels” of obstruction and delay. Similarly, Russell Wheeler of the Brookings Institution found that “of the 29 nominee-less vacancies [in 2013], 26 were in states with a Republican senator and were well over a year old on average,” and that it took Obama longer than Bush, on average, to submit judicial nominations, indicating more aggressive Republican blue slip threats and bargaining than under past presidencies.

There is no indication yet that Trump’s nominees are facing similar levels of obstruction. According to Russell Wheeler, on average, Obama’s judicial nominees waited upwards of 200 days to be confirmed. On the other hand, data from the Alliance for Justice as of September 12th reveals that Trump’s nominees have only been pending in the Judiciary Committee for 44 days on average (excluding Trump’s nominees on 9/7/17, the average would be 67 days). Republicans criticizing Democrats for withholding or not yet turning in their blue slips are espousing standards they did not hold themselves to under Obama.

3. Consultation with home state senators prior to submitting a nomination has remained a central tenet of blue slip policy.

Sens. Wyden and Merkley explained that they informed the White House “they would not greenlight any candidate that had not been approved by a bipartisan judicial selection committee in the state.” After the White House bypassed their process, they withheld their blue slips.

Similarly, one reason Sen. Franken withheld his blue slip was because he hoped

“President Trump would work with me to identify a consensus candidate…[But] the White House had already settled on Justice Stras before first approaching me, and the president nominated him despite the concerns that I expressed.”

These rationales reflect the historical commitment to pre-nomination consultation with home state senators as the bedrock of blue slip policy. In fact, some Republicans who withheld blue slips under Obama offered similar explanations — while others offered partisan explanations.

5. History demonstrates that blue slip policy does not have to be politicized.

History reveals the blue slip need not be motivated by partisan gamesmanship, but current Chairman Grassley (R–IA) may deviate from his predecessors and politicize the blue slip. Under Obama, Grassley required two affirmative blue slips for a nomination to proceed; with Senate Republicans pressuring Grassley to eliminate the blue slip, he must decide whether to change his blue slip policy to advance partisan goals, or to maintain the policy he espoused under Obama.