Part I of this post discussed the dramatic drop in “overvotes” in New York State between 2010 and 2012. Overvotes are votes that are invalidated because a voter has selected more than the permitted number of candidates (or the machine reads the voter as having done so). In 2011, the Brennan Center issued a report documenting a statewide overvote rate of .4 percent, when overvotes should almost always be close to zero. Most often, the cause of overvotes is a citizen unintentionally voting for more candidates than is allowed in a race. The result is that the voter’s intended choices are nullified.

And a primary cause of overvoting is poor ballot design. In Part 1, we demonstrated how a better listing of candidates on the ballot was partly responsible for the 75 percent drop in New York State overvoting between the elections of 2010 and 2012.

But there seem to have been other important factors. The jurisdictions that had the most dramatic reductions in overvote rates had one important thing in common beyond a better ballot: they used machines manufactured by ES&S (Election Systems & Software). About half the state uses these machines; the other half uses machines made by Dominion Voting.

In 2010, both the ES&S and Dominion machines displayed similarly confusing messages when they detected  overvotes, and we saw high overvote rates in counties that used both machines (though they were actually generally higher in ES&S counties)

Here’s what voters who used the ES&S machine would see if they overvoted in 2010: 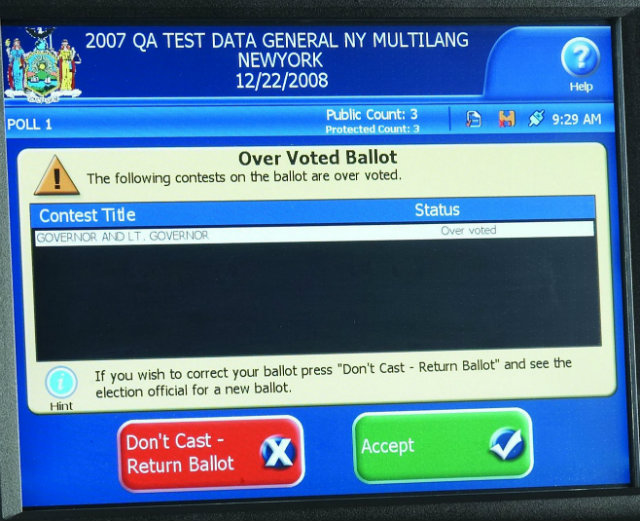 First, note that the term “Over Voted” is not explained. A voter has no idea what mistake they’ve made, or how to correct it. Second, the screen does not indicate that your ballot will be lost if you push the “accept” button, which is highlighted in green.  Counter-intuitively, the only way for an individual who had overvoted to correct the error and get their vote counted was to select a red button marked “Don’t Cast.” Many people might think pressing this button would actually mean their vote would not count at all.  Not surprisingly in 2010, lots of people pressed the green button and lost their votes.  The Dominion message had the same problems.

Prior to the 2010 election, the Brennan Center, representing several civil rights groups and citizens, sued the New York State and New York City Boards of Elections in U.S. District Court to ensure voters got better notice when the machines could not read their votes, so that voters could correct their ballots. The case was settled after the 2010 election.  Although the State Board agreed to ensure better messages on all machines before the 2012 election, they did not certify all changes in time.  The result was that the Dominion machines had the same message in 2012 as in 2010. ES&S, on the other hand, was able to  make some changes  to its error message that were accepted in time for the 2012 election. If an ES&S machine spotted an overvote in 2012, here’s what the voter saw: 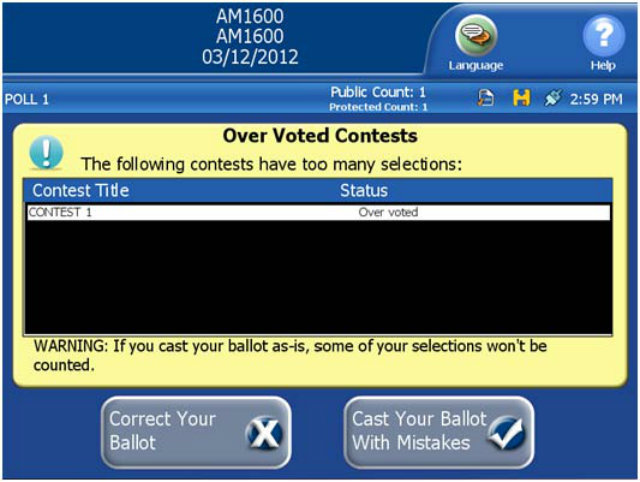 There are three notable differences between 2010 and 2012 screens. First, not only is the voter told there is an overvote, but the voter is told the nature of the error: some contests have too many selections. Second, the voter is told the consequence if they ignore the mistake and choose to cast their ballot anyway: the vote won’t count. Third, the voter is offered a clear choice to either correct the error or “cast your ballot with mistakes.” As already noted, the Dominion machines displayed the same confusing message in 2012 that they did in 2010. Just about the only virtue of the disparity between the ES&S and Dominion was that it provided a genuine test as to whether a clearer message about overvotes could make a difference. The data is unambiguous.

[1]These percentages reflect the average overvote rates for the 34 counties in New York for which overvote data was available in both 2010 and 2012.

As the evidence shows, ES&S machines had more than twice the drop in overvoting rates than did the Dominion machines (.38 percent vs. .18 percent). Overvote rates on ES&S machines in 2012 were one-sixth of what they were in 2010, a truly astounding reduction.

All of the above serves as an important reminder. Good design and plain language messages to voters are critical to ensuring that voter intent is recorded accurately.

The good news: new, improved error messages have been installed for all voting machines in New York going forward.