The Brennan Center has long documented the importance of design in elections. The 2010 and 2012 elections in New York offer yet another case study.

In 2011, the Brennan Center released a report that showed that in the 2010 general election there were tens of thousands of lost “overvotes” – votes that the new machines could not read because voters had selected more than the permissible number of candidates. Overvotes are almost always unintentional. In a well functioning election overvotes are almost always close to zero. When they are not, it’s worth exploring what might have gone wrong. In 2010 New York’s overvote rate approached .4 percent for the governor’s race, with about 20,000 votes being lost in that contest alone. In modern history, New York had never seen so many lost votes due to overvoting. In fact, the lever machines, which New York used for decades, would not allow overvotes (it was impossible to select two candidates for President, for instance; the levers would lock once one candidate was selected, and the only way to select a different candidate would be to de-select the first).

At the time, the Brennan Center and others expressed concern that the 2012 election would be a repeat performance, with even graver consequences because of higher turnout in a presidential election year.

But both the total number and percentage of overvotes fell dramatically, to just 0.1 percent – a 75 percent drop , with just 5,500 lost votes.

One of the big reasons for fewer overvotes had less to do with the voting machines than the design of the ballots that were scanned into the machine. The best, most reliable voting machine is worthless if a ballot is poorly designed.

One common ballot design flaw that is particularly linked with overvoting is “split contests.” Split contests are when the list of candidates for an office runs across more than one row. The problem is a voter may select one candidate in each row, thereby nullifying their preference in the race. 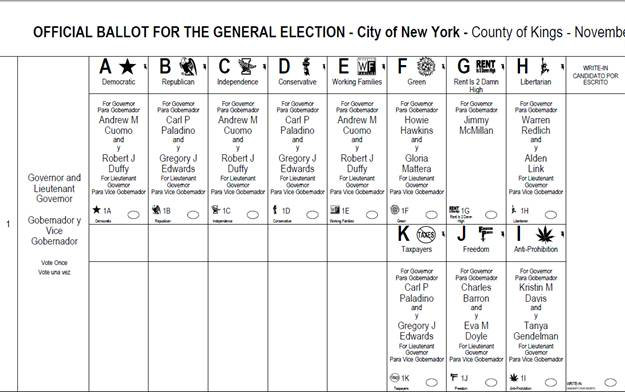 Now look at the ballot for the 2012 Presidential race:

Although the names of Barack Obama and Mitt Romney are repeated, all the candidates appear in a single row. In part, this was a happy accident. With fewer parties and candidates in this race than the gubernatorial contest two years earlier, all the nominees could fit in one row. This design appears to have had a huge impact, contributing to far fewer overvotes.

Unfortunately, New York’s arcane ballot design rules guarantees that split contests have not been eliminated. The 2012 results provide concrete evidence in support of the Voter Friendly Ballot Act pending in the New York State legislature, which would ensure New Yorkers have ballots that are easier to read and understand.

Better ballot design is not the sole cause for the steep drop in overvotes. Part II of this post will show that design for machines can matter just as much as the design of ballots.